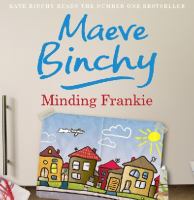 Baby Frankie is born into an unusual family. Her mother is desperate to find someone to take care of her child and she doesn't have much time. Noel doesn't seem to be the most promising of fathers but despite everything, he could well be Frankie's best hope. As for Lisa, she is prepared to give up everything for the man she loves; surely he's going to love her back? And Marian is having none of it. She knows what's right, and has the power to change the course of Frankie's life . . . but Marian is hiding secrets of her own.

Fans of Irish author Binchy will welcome the return of some familiar faces (from Quentins; Heart and Soul; Scarlet Feather) and also enjoy meeting new characters in her latest. Frankie is a little girl born as her mother Stella is dying of cancer. During the last stages of her life, Stella contacts Noel, a one-night stand whom she claims is the father. Noel has a host of his own problems but decides to pull things together for the child. Friends and family help out, but the social worker assigned to the case cannot accept the arrangements. Having never dealt with her own troubled childhood, she works to find proof that Frankie would be better off in foster care. The brief appearances of so many characters from previous works might be annoying, but the stories of Noel, his cousin Emily, and his friend Lisa, along with the social worker who wants to pull them apart and the little girl who pulls them together, make this novel fresh and appealing. VERDICT An enjoyable novel about life, love, and second chances. [300,000-copy first printing; see Prepub Alert, LJ 10/1/10.]-Beth Blakesley, Washington State Univ. Libs., Pullman (c) Copyright 2010. Library Journals LLC, a wholly owned subsidiary of Media Source, Inc. No redistribution permitted.

Bestseller Binchy is a national treasure in her homeland of Ireland, and her latest novel is a perfect illustration of why. Old-fashioned and newfangled are totally compatible in contemporary Dublin, where lonely, hard-drinking slacker Noel Lynch discovers he's about to be a single dad now that the one-night-stand/mother of his child, Stella, is dying. Suddenly, the salt-of-the-earth residents of St. Jarlath's Crescent and Noel's resourceful American cousin, Emily, spring into action to keep Noel sober, fire up his ambitions, appease militant social worker Moira, and help raise baby Frankie. It's a hair-raising, heartwarming juggling act for Noel, his quirky roommate Lisa, do-gooder Emily, and a neighborhood crowded with eccentric characters and adorable pooches-including one with a handsome inheritance. Binchy (Heart and Soul) straddles improbable and possible in her touching saga, and if your mind can't quite wrap itself around St. Jarlath's Crescent, your heart will have no trouble recognizing the landscape. (Mar.) (c) Copyright PWxyz, LLC. All rights reserved.

Reading a Maeve Binchy novel is like settling in for a cozy visit with an old friend. In vintage Binchy style, a cast of colorfully eccentric characters living in a snug Dublin neighborhood seamlessly weave in and out of each other's lives, united by family, faith, friendship, and community. When a young alcoholic learns he has fathered a child with a dying woman, he must step into the role of father, protector, and provider to his infant daughter, Frankie, in a matter of weeks. Determined to succeed, though totally unprepared for his new responsibilities, Noel gets an essential assist from his visiting American cousin. Exercising her tremendous gifts of organization and insight, Emily cobbles together a neighborhood support system, featuring a few familiar faces from previous Binchy books. As everybody begins to mind Frankie, a suspicious social worker pokes her nose in where it doesn't belong, attempting to dredge up any dirt she can on Noel and his slightly unorthodox network of babysitters. Readers will need a box of tissues handy as the good-hearted residents of St. Jarlath's Crescent prove that it does indeed take a village to raise a child.--Flanagan, Margaret Copyright 2010 Booklist

A Dublin neighborhood full of many of the characters who frequently pass through Binchy's Irish novels (Heart and Soul, 2009, etc.) bands together to help a young single father raise his daughter.Aware she will not survive her baby's birth, fatally ill Stella tells alcoholic loner Noel that he is the father. He doesn't remember having actual sex with Stella and is far from certain he wants or can handle the responsibility. But with the help and encouragement of his cousin Emily, in Dublin on an extended visit from New York, Noel stops drinking and takes custody of baby Frankie after Stella's death at St. Brigid's Hospital. His transformation from loser to responsible, loving father and his struggle to convince his uptight social worker that he is fit to raise Frankie forms the central plot. But once Noel's in AA and night school, he pales as a character. After so many novels, Binchy's recurring characters have become so numerous that even devotees may have trouble keeping track. Here, hospital administrator Frank Ennis is the one to watch as he reaches out to the grown son he never knew he had. As usual, Binchy's supporting characters steal the show. Social worker Moira seems like the stereotypical uptight bureaucrat at first, but her loneliness and painful self-awareness of her failure to connect to others become increasingly heart-wrenching. Moira has to overcome an unhappy family situation, as does Lisa, a graphic artist who moves in as Noel's platonic housemate to escape her parents' sham marriage, although she's in her own sham love affair with a flashy restaurateur. Circling everywhere, boringly perfect Emily has an uncanny ability to ask the right question and solve problemseveryone in Noel's life has a story. A dram of sorrow leavens the predictably happy ending.Binchy remains the queen of spiritual comfort, but this time round she's stretched interest thin with ups and downs too many and too mild.]] Copyright Kirkus Reviews, used with permission.