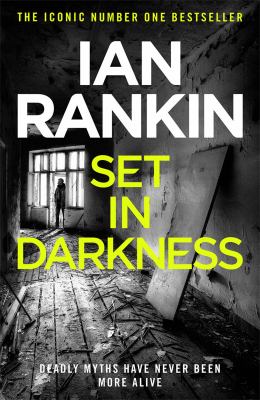 Edinburgh is about to become the home of the first Scottish parliament in 300 years. As political passions run high, DI John Rebus is charged with liaison, thanks to the new parliament being resident in Queensbury House, bang in the middle of his patch. But Queensbury House has its own, dark past.

Legend has it that a young man was roasted there on a spit by a madman. When the fireplace where the youth died is uncovered another more recent murder victim is found. Days later, in the gardens outside, there is another body and Rebus is under pressure to find instant answers.

As the case proceeds, the Inspector finds himself face to face with one of Edinburgh's most notorious criminals...

For those planning a trip to Edinburgh anytime soon, Rankin's (Dead Souls) novel can serve as a guideDto places to avoid. D.I. John Rebus, of the drinking problem and the surly attitude, is back in a bigger and darker tale that indicts most of Scottish life from its new politics to its old-boy network. Rebus is assigned to a committee that will oversee the refurbishment of Queensberry House, the site of the new Scottish Parliament. From the start, he locks horns with Derek Linford, the inexperienced D.I., who is also the current darling of the higher-ups. From beneath the rubble on which Edinburgh rests, the skeletons start emerging. One desiccated body is found walled up in the site, the remains of violence that occurred 30 years ago. Then the corpse of a prospective member of the new Parliament turns up on the grounds. When a "tramp" who throws himself on the tracks at Waverly Station turns out to have a bank account of 400,000, Rebus wonders if all three deaths are somehow connected. Amid a very large cast, it's difficult sometimes to tell who's who and what's what or to tell the police from their adversaries without a guide. And that's the sobering point of this latest outing from one of the very best practitioners of police procedurals around today. Recommended for all public libraries. [Previewed in Prepub Alert, LJ 7/00.]DBob Lunn, Kansas City P.L. MO (c) Copyright 2010. Library Journals LLC, a wholly owned subsidiary of Media Source, Inc. No redistribution permitted.

In the 12th novel in the increasingly engaging Inspector Rebus series (Knots and Crosses; Dead Souls; etc.), Gold Dagger award-winner Rankin has woven a plot grittier and tighter than ever. When a body, long dead, is found on the site of the new Scottish Parliament and is soon followed by another, fresher kill, this time that of a leading candidate for the new governing body, Rebus is convinced of a connection between the two. Det. Siobhan Clarke witnesses a third death, the suicide of a surprisingly wealthy homeless man; the question of where his wealth came from seems related to the other deaths. Clarke, a determined young woman trying to make her way in the male world of police work, is a refreshing, complex addition to this series. Meanwhile, Big Ger Cafferty, arch foe of our hero, has been released from jail; he's terminally ill (or is he?) and apparently wants some quality time with Rebus in his final hours. By incorporating other strong characters, Rankin has saved the series from burrowing too far into the maudlin introspection associated with Rebus's drinking problem. Topical Scottish nationalism and the new Parliament, along with Rankin's consistently fascinating view of Edinburgh's seedy side, give the novel interest beyond its plot. And the plot is worthy of the series: raging and racing and teetering on the edge of falling apart, before Rankin slams the reader with a final masterful twist. (Nov.) (c) Copyright PWxyz, LLC. All rights reserved

When we last saw Rankin's iconolastic Edinburgh copper John Rebus, he was trying to determine if his own soul was every bit as dead as those of the bad guys he struggles to catch (Dead Souls [BKL S 15 99]). The jury's still out on that one, but Rebus has pretty much given up trying to reform: he's hitting the single malt as hard as ever, usually while listening to classic rock and trying to make it through yet another sleepless night, and he continues to antagonize every bureaucrat who comes his way. There are plenty of those this time, as Rebus has been assigned to a bogus task force called the Policing of Parliament Liaison Committee. Things liven up, though, when a body is found inside a bricked-up fireplace in one of the buildings under construction for the new Scottish Parliament. That's a tantalizing-enough mystery, but when a top politico is found dead at the construction site, Rebus has something he can sink his teeth into--a decades-old crime whose tentacles touch the present and lead to a new confrontation with Rebus' longtime nemesis, Edinburgh crime boss Big Ger Cafferty. The Rebus series has leapfrogged to the top of the procedural heap; it's now the standard against which the hard-boiled cop novel must be measured. Nobody writes darker than Rankin; nobody confronts the ravages of the human heart with a sharper or more unflinching eye; and nobody probes quite as deeply into the inner lives of today's browbeaten coppers. --Bill Ott

Touring the site of Edinburghs new parliamentary building complex, dour DI John Rebus and fast-tracking DI Derek Linford are present when a moldy, desiccated skeleton comes tumbling out of a long-disused fireplace. At nearly the same time, Roddy Grieve, a lesser member of the towns leading family standing for Scotlands parliament, gets the back of his skull cracked in, while a down-and-outer living rough leaps to his death from a bridge. Rebus, never a team player, is assigned to sort out Grieves murder, but with Linford calling the shots. Meanwhile, Siobhan Clarke, newly off a rape-and-assault case, is to handle the leaper, who turns out to have £400,000 in the bank, while DS Wylie and DC Hood have the grunt work of identifying the skeleton. Ignoring Linford, niggling round the edges of the other two cases, Rebus senses the three tie together, and is soon hounding bad-guy builders and developers Barry Hutton and his strong-arm uncle, Bryce Callan, and meeting up again with Big Ger Cafferty (The Black Book, 1994), released from prison because of supposedly inoperable cancer. Irritating his superiors, taunting Linford, and unwisely accepting a ride with Big Ger, Rebus identifies a brother on the lam, an obsessed peeping Tom, and a scheme to control the Edinburgh landscape, but not before more death and his own violent beating. Rankin, who won a Gold Dagger for Black and Blue (1997), adds another bracing Scotch sour to his fine Rebus series, concentrating this time on mordant family relationships, professional infighting, and the near-lethal mistakes of a good man.
More book reviews at iDreamBooks.com