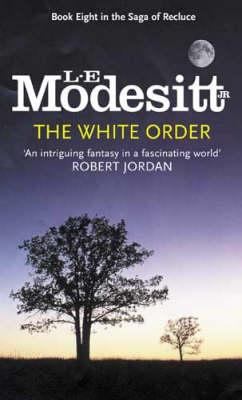 L.E.Modesitt's bestselling fantasy novels set in the magical world of Recluce are among the most popular in contemporary fantasy.

THE WHITE ORDER is the story of Cerryl, a boy orphaned when the powerful white mages killed his amateur-magician father. Cerryl, raised by his aunt and uncle, is a curious boy, attracted to mirrors and books. The miller's daughter teaches Cerryl to read his father's books, and it seems that the talent for magic has been passed from father to son. When Cerryl and the miller witness a white mage destroy a renegade magician, the miller realises that he can no longer keep the boy safe. So Cerryl is sent to the city of Fairhaven to finds his destiny: To become one of the great magicians of his age.

As an apprentice scrivener, Cerryl discovers his inherent talent for chaos magic, inherited from his father, a fugitive white mage. Taken to study with the mages of the White Order of Fairhaven, Cerryl learns to harness magic from his teachersÄone of whom is bent on his destruction. Set in the same time period as The Magic Engineer (LJ 3/15/94), Modesitt's ninth novel in his popular "Recluce" series continues the epic history of a world where chaos and order vie for ultimate control. The author's low-key approach to high fantasy results in an intimate, thoughtful tale that belongs in most fantasy collections. [Previewed in Prepub Alert, LJ 1/98.] (c) Copyright 2010. Library Journals LLC, a wholly owned subsidiary of Media Source, Inc. No redistribution permitted.

The prolific and popular fantasy author adds to his Recluce series (The Chaos Balance, etc.), with this entry tracing the rise of an orphan, Cerryl, to powerful magicianship. That's a venerable concept, but Modesitt keeps it fresh with crisp characters and a consistent, well-detailed setting. The magical system employed here features white chaos magic, somehow connected to the colors of light, and the magic of order, which is black and associated with cold iron. The background is medieval EuropeanÄlargely preliterate, with guilds and apprenticeshipsÄbut Modesitt uses historical details to create a vivid, realistic culture instead of a stereotyped fantasy world. Cerryl's apprenticeships in a wood mill and, later, to a scrivener lend depth to his ensuing, more magical, adventures. Like many fantasy heroes, Cerryl is virtuous but has unusual magical potential, leading to opportunities but also to problems, especially from jealous apprentices or mages of the White Order. The theme of power, including its uses and misuses, and its various forms, magical, political and sexual, runs throughout the book. As the novel widens its focus from Cerryl's education to his involvement with war, intrigue and assassination, it becomes more colorful but less original. Still, Modesitt provides the requisite adventure and wizardry, plus people and places that are as true as they are magical. Author tour. (June) (c) Copyright PWxyz, LLC. All rights reserved

Yet another entry in Modesitt's popular Recluce series, one that upholds the saga's reputation for intelligence, occasional slow pacing, and increasing originality. It is the story of the youth of Cerryl, later one of the great white mages. Orphaned by the death of his hedge-wizard father, he is raised by relatives and later by friends, all of whom try to conceal or discourage his growing gifts. Eventually, he is discovered by the white mages and taken to one of their strongholds for schooling, and also for testing so severe that he may not survive. This volume in the series stands unusually well on its own as a classic and competent coming-of-age story. Longtime followers of Recluce will appreciate it more, however, because of the many quotations in it that refer to events covered in other Recluce books. Modesitt's approach to fantasy is an acquired taste, some say, but a great many readers seem to have acquired it, and libraries should accommodate it. --Roland Green

Another episode--the eighth so far--in Modesitt's continuing battle between White (Chaos) magic and Dark (Order) magic (most recently, The Chaos Balance, 1997). Young orphan Cerryl discovers that he has a talent for glimpsing distant places and people in odd fragments of mirror; and in a mostly illiterate society, he has a hunger to learn how to read. Apprenticed to a kindly miller, whose daughter teaches him his letters, young Cerryl learns the truth about his magic-touched father, and resolves someday to travel to the city Fairhaven, stronghold of the most powerful Chaos magicians, and there discover his destiny. A quality series that's settled into a pleasantly understated, modestly involving groove. Copyright ©Kirkus Reviews, used with permission.
More book reviews at iDreamBooks.com