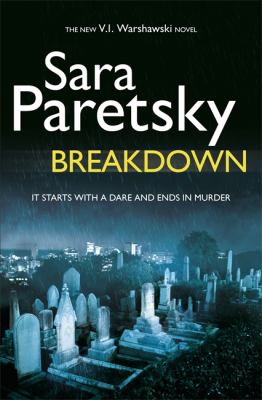 DDC classification: PAR Summary: When the teenage daughters of some of Chicago's most influential families discover the body of a ritually murdered victim, investigator Warshawski explores theories that the killing is linked to a hostile media campaign against a senatorial candidate or a wealthy patriarch's childhood in Nazi-occupied Lithuania.
Tags from this library: No tags from this library for this title. Log in to add tags.
Fiction notes: Click to open in new window
Total holds: 0

When the teenage daughters of some of Chicago's most influential families discover the body of a ritually murdered victim, investigator Warshawski explores theories that the killing is linked to a hostile media campaign against a senatorial candidate or a wealthy patriarch's childhood in Nazi-occupied Lithuania.

Fans of V.I. Warshawski will breathe a sigh of relief as she returns in another novel filled with action, plot twists, and political maneuverings sure to set the brain and heart on edge. V.I. is called to round up teenage girls who are out in a cemetery past curfew. The girls are initiating a new member into their secret club celebrating a beloved author, and they believe they will become shape-shifters just like their favorite fictional character. Their ritual, however, is ruined when they stumble upon a very real murder victim, killed with a stake through the heart. As the investigation plays out, bodies pile up, and V.I. unravels the strings that lead from the girls and their powerful families through competing political campaigns, growing anti-immigrant sentiment, historical involvement through generations, and resurfacing stories from German-occupied Lithuania. VERDICT The 14th V.I. Warshawski title (after Body Work) is nothing less than riveting, which is what Paretsky fans expect. Lots of topical moments and references to the current sociopolitical atmosphere keep this book charged and moving. Highly recommended. [See Prepub Alert, 7/5/11.]-Julie Kane, Sweet Briar Coll. Lib., VA (c) Copyright 2012. Library Journals LLC, a wholly owned subsidiary of Media Source, Inc. No redistribution permitted.

At the start of MWA Grand Master Paretsky's riveting 15th novel featuring Chicago PI V.I. Warshawski (after 2010's Body Work), Warshawski goes in search of several 12- and 13-year-old girls, members of her cousin Petra's book club, who are out after curfew. Warshawski finds the girls in a cemetery, steps away from a recently deceased man, Miles Wuchnik, who she later learns was an unscrupulous PI. Media attention on two of the girls-the daughter of Sophy Durango, a liberal U.S. Senate candidate, and the granddaughter of Chaim Salanter, a wealthy Jewish businessman linked to Durango's campaign-intensifies an already mudslinging political race, particularly when it's revealed that the girls were trying to perform a "vampire" ritual from their favorite supernatural novel. Meanwhile, bigoted TV host Wade Lawlor attempts to derail Durango's campaign and slander Salanter with unfounded accusations about Salanter's treatment under the Nazis. Amid all the ugly politics, Warshawski once again proves a dogged champion for the truth at any cost. Agent: Dominick Abel. (Jan.) (c) Copyright PWxyz, LLC. All rights reserved.

*Starred Review* Both Paretsky and her sharp-tongued justice-seeker, V. I. Warshawski, remain formidable in the masterfully suspenseful fifteenth novel in this superb and adored Chicago-set series. Smart and pugnacious PI V. I. continues to follow leads no matter how many cherished outfits get ruined by mud, blood, sweat, and puke, including the evening gown she wears to a glitzy gala for Wade Lawlor, the star rabble-rouser and slanderer on GEN, a shrill right-wing network. V. I. is called away by Petra, her young cousin, now a regular in the series, to look for the teenage girls Petra works with in a program that brings together daughters of penniless immigrants with daughters of privilege. V. I. finds them in a cemetery, performing a ritual inspired by their ardor for a series of vampire novels. She also finds a dead man with a metal rod driven through his heart. The ensuing morally reprehensible case, which V. I. compares to a Rubik's Cube, involves class divides, a state mental hospital, warped brother-sister relationships, a tricked-out Camaro, a Holocaust survivor's tale, a wrongful murder conviction, and the politics of hate. V. I. reigns as crime fiction's spiky, headstrong warrior woman of conscience, and Paretsky, classy champion of the powerless, has never been more imaginative, rueful, transfixing, and righteous. HIGH-DEMAND BACKSTORY: Named 2011 Grand Master by the Mystery Writers of America, best-selling crime writer Paretsky always draws readers en masse.--Seaman, Donna Copyright 2010 Booklist

Body Work, 2010, etc.); in fact, he meets with her repeatedly only to warn her to stay off the case. Not that she's not distracted all on her own, since her old law school friend, bipolar attorney Leydon Ashford, has just been thrown from a height at Rockefeller Chapel and lies near death. Leydon's last cryptic message--"I saw him on the catafalque"--seems to connect the attack on her to Wuchnik's murder. Can V.I. put together the pieces in time to save the young witnesses from the killer? Plotted with all Paretsky's customary generosity, this standout entry harnesses her heroine's righteous anger to some richly deserving targets, all linked together in a truly amazing finale.]] Copyright Kirkus Reviews, used with permission.
More book reviews at iDreamBooks.com