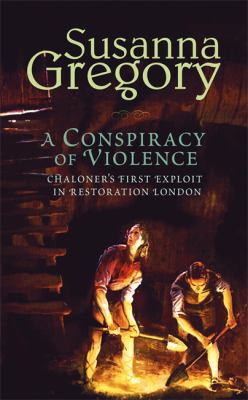 A conspiracy of violence / Susanna Gregory.

The dour days of Cromwell are over. Charles II is well established at White Hall Palace, his mistress at hand in rooms over the Holbein bridge, the heads of some of the regicides on public display. London seethes with new energy, freed from the strictures of the Protectorate, but many of its inhabitants have lost their livelihoods. One is Thomas Chaloner, a reluctant spy for the feared Secretary of State, John Thurloe, and now returned from Holland in desperate need of employment. His erstwhile boss, knowing he has many enemies at court, recommends Thomas to Lord Clarendon, but in return demands that Thomas keep him informed of any plot against him. But what Thomas discovers is that Thurloe had sent another ex-employee to White Hall and he is dead, supposedly murdered by footpads near the Thames. Chaloner volunteers to investigate his killing: instead he is despatched to the Tower to unearth the gold buried by the last Governor. He discovers not treasure, but evidence that greed and self-interest are uppermost in men's minds whoever is in power, and that his life has no value to either side.

At the start of this rapidly paced if sometimes confusing first in a new historical series from Gregory (A Deadly Brew), ex-government spy Thomas Chaloner returns from a mission in Holland after Charles II takes the throne in 1660. When spymaster John Thurloe's post-boy, Charles Stewart, is abruptly slain, Chaloner, hoping to impress his former boss, chases the lad's killers through London's raunchiest slums, eventually landing in White Hall, where the king is holding his annual "Touching Ceremony" to heal the sick. Amid England's worsening relations with Holland, Chaloner's Dutch girlfriend, Metje, incriminates him, and he finds himself at an "important crossroads," with options of spying for the king, hunting rumored treasure buried in the Tower or returning home to Buckinghamshire to live quietly. Some obvious clues and implausible coincidences make the resolution of his many challenges less than satisfying in this overly complicated mix of history, suspense and romance. (July) (c) Copyright PWxyz, LLC. All rights reserved
More book reviews at iDreamBooks.com