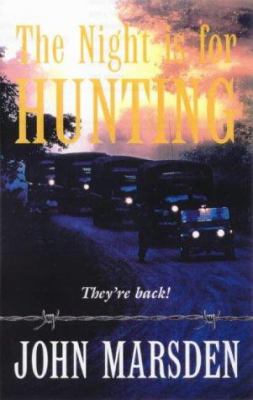 The night is for hunting.

Genre/Form: Young adult fiction. | Teen fiction.
Contents:
While trying to care for a group of abandoned young children, five Australian teenagers continue their struggle for survival and their resistance against the enemy invading their homeland.
Abstract: A lone band of young survivors fight back against a brutal army who have destroyed Australia. Ellie and the others find themselves looking after a bunch of feral kids, as well as themselves. In order to survive, the group must face head-on combat - and win.
Tags from this library: No tags from this library for this title. Log in to add tags.
Fiction notes: Click to open in new window

Sixth in the award-winning 'Tomorrow' series of dramatic novels for teenagers. Elli, Homer, Lee, Fi and Kevin still face the horrors and dangers of war, and they also have to cope with the way in which their experiences are changing them. Author's other publications include 'So Much to Tell You' and 'Prayer for the 21st Century'.

Suitable age 14 plus. Part six series. Six teenagers struggle to survive in the Australian bush after a foreign invasion.

While trying to care for a group of abandoned young children, five Australian teenagers continue their struggle for survival and their resistance against the enemy invading their homeland.

A lone band of young survivors fight back against a brutal army who have destroyed Australia. Ellie and the others find themselves looking after a bunch of feral kids, as well as themselves. In order to survive, the group must face head-on combat - and win.

Sequel to: Burning for revenge.

The adventures of five Australian teenagers continue in the sixth installment in the Tomorrow series, The Night Is for Hunting by John Marsden. While trying to care for a group of ungrateful orphans, Ellie and her friends struggle to survive against enemy invaders. (Aug.) (c) Copyright PWxyz, LLC. All rights reserved

Gr 7 Up-Marsden continues the saga that began in Tomorrow When the War Began (Houghton, 1995), in which Australia was invaded and occupied by an unknown enemy and a group of teens organized a guerrilla campaign against the invaders. New Zealand has since been drawn into the war, but the setting of this sixth installment is largely in "Hell," a part of the Australian outback used by the young partisans as a safe haven when they aren't launching attacks against the enemy. Ellie and her comrades take in "ferals," children who have been left to run wild in the streets of a nearby town. The kids are not receptive to being cared for, and the teens' attempts at building a sense of community and family sometimes allow for a few lighthearted moments. The war, of course, is never far away. There are plenty of dramatic, fast-paced battle scenes with lots of action and carnage, which is vividly depicted. Ellie wrestles with her conscience throughout the story. Does she have the right to kill others in order to survive? Marsden offers no definitive answer to such questions, leaving readers to make up their own minds. Although this story picks up where Darkness, Be My Friend (Houghton, 2001) left off, it stands on its own well enough for readers unfamiliar with the series to appreciate it. The main audience for the book, however, is likely to be those who have followed the war from the beginning.-Edward Sullivan, White Pine School, TN (c) Copyright 2010. Library Journals LLC, a wholly owned subsidiary of Media Source, Inc. No redistribution permitted.

Gr. 8-12. Although the eagerly awaited sixth book in the Tomorrow series will not disappoint avid fans, it's obvious that Marsden is winding down his story. The five remaining teens, who have fought relentlessly against the enemy invading Australia, are fighting personal battles of loneliness and isolation, while war and death are their constant companions. At the same time, they are creating a broader family by rescuing and trying to care for a group of feral children. The rescue creates reading excitement and the wild chases, narrow escapes, and gun battles are trademark Marsden. Once again, Ellie is the leader of the brave, compassionate band of marauders, and the parenting that they undertake is an interesting twist to the story. As the book ends, readers will be left with the nagging suspicion that the bush wilderness is no longer safe, and with the bittersweet anticipation of rescue and victory. --Frances Bradburn

In the sixth book in the series that started with [cf2]Tomorrow, When the War Began,[cf1] Ellie and her friends find themselves caring for the ferals, a group of children who have been struggling to survive on their own. The pace is slower than in the previous books, but fans of the series will find the same tense action scenes and thought-provoking handling of the effects of war on these Australian teens. Glos. From HORN BOOK Fall 2002, (c) Copyright 2010. The Horn Book, Inc., a wholly owned subsidiary of Media Source, Inc. No redistribution permitted.

The rousing action of John Marsden's "Tomorrow" series continues in this sixth installment of his continuing saga in which Australia is conquered by an unnamed foreign army. This time Ellie and her teenage guerrilla fighters encounter a problem more difficult than combat: they become the guardians of the five children they first encountered in Burning for Revenge (2000). She foils an attempt by soldiers to arrest them and blazes off in a dramatic car chase. The children, however, don't appreciate the help. They trek off into the bush, forcing the teens to track them down before they die of thirst. More implausible but gripping action ensues when Ellie and Homer raid an enemy house for food, then fight a ferocious gun battle. Marsden has shown himself to be one of the more insightful of YA authors with such titles as So Much to Tell You (1987). His flowing writing style adapts well to the action genre, yet he doesn't abandon his exploration of adolescent trauma here. He juxtaposes Ellie's metamorphosis into a hardened, bitter fighter with the transformation of innocent children into suspicious, feral creatures. Young readers can enjoy this series for the action alone, but those looking for greater depth will be satisfied as well. Marsden demonstrates that action books don't have to be trash. (glossary of Australian slang) (Fiction. YA)
More book reviews at iDreamBooks.com