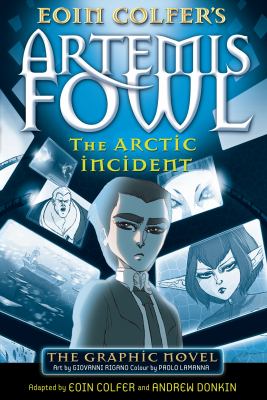 ARTEMIS FOWL HAS ALWAYS RESENTED GOING TO SCHOOL, PREFERRING INSTEAD TO PLOT HIS NEXT CRIME.

So when the young criminal genius learns that his father is being held prisoner by the Russian Mafiya, he cuts class and braves the sub-zero temperatures of the Arctic Circle to rescue him.

As if having a band of gangsters on his tail isn't enough for the criminal mastermind, Artemis's old enemies, the fairy People, believe that he is supplying illegal human power cells (that's AA batteries to us) to the goblin gangs. But is he responsible - or is someone else arming the goblins?

Back in COLOUR, back in ACTION

In the second and third books in the series about the 13-year-old criminal mastermind, he proves he has a heart after all (in the former), and, in the latter, craves one more adventure before he turns to the straight and narrow. "Rapid-fire dialogue and wise-acre humor ensure that readers will burn the midnight oil," said PW in a starred review of Eternity Code. Ages 10-up. (May) (c) Copyright PWxyz, LLC. All rights reserved

Gr 5-8-Rollicking good fun, this recording of Eoin Colfer's second Artemis Fowl adventure (Hyperion, 2002) loses nothing in the translation to audio. Artemis Fowl, a 13-year-old genius criminal mastermind, mounts an unswerving crusade to rescue his father, who is being held for ransom by the Russian Mafiya, no matter what the cost. Artemis, and his trusty manservant, Butler, recruit several members of the LEPrecon Fairy Police, including Captain Holly Short, the first female fairy officer, to launch a no-holds-barred plan in this story that is a mixture of high-tech spy novel and fantasy, combined with sidesplitting humor. The non-stop action ranges from Ireland to The Lower Elements-the Fairy world-to the Arctic Circle. Nathaniel Park does a fabulous job differentiating among characters, using numerous accents and intonations to good effect. Listeners new to the series will have no trouble following the story, but will probably want to read or listen to the first installment, Artemis Fowl (Listening Library, 2004) as well as the third title in the series, Artemis Fowl: The Eternity Code (Listening Library, 2004).-Charli Osborne, Oxford Public Library, MI (c) Copyright 2010. Library Journals LLC, a wholly owned subsidiary of Media Source, Inc. No redistribution permitted.

Holly Short and Artemis Fowl find themselves uneasily on the same side as they deflect a palace coup in the Lower Elements, and, up above, try to rescue Artemis's father from kidnappers. The two plot strands aren't sufficiently entwined, and an excess of action sequences and high-tech fairy fighting gear give the book a frenetic quality. But fans of the first book will be undeterred. From HORN BOOK Fall 2002, (c) Copyright 2010. The Horn Book, Inc., a wholly owned subsidiary of Media Source, Inc. No redistribution permitted.

In this sequel to Artemis Fowl (2001), the intellectual brilliance and total lack of scruples of the eponymous hero have enabled him to use his father's criminal empire to accumulate a vast fortune. Artemis utilizes this money to finance the search for his father, still missing two years after a disastrous and almost legitimate foray into Russia. Upon the receipt of an e-mailed picture, supposedly of his father, Artemis and his bodyguard, Butler, start the journey to Russia, only to be abducted by an old adversary Captain Holly Short, of the fairy police, LEPrecon. Holly and her commander erroneously suspect Artemis of masterminding a smuggling ring. The deal Artemis and Butler make with the LEPrecon officers (Artemis lends his brain to solve the smuggling puzzle; LEPrecon lends its advanced technology to the search for Fowl, Senior) leads to a series of major and minor disasters, which provide suspense and tension to this well-plotted story. Characterization is slight but amusing: Holly Short, first female captain in the LEPrecon is a feisty but warmhearted fairy, Foaly the centaur head of LEPrecon's technology department is brilliant if irascible, and the dwarf, Mulch, is hilarious, full of himself and of dwarf gas--don't ask. Filled with puns, word plays, and inventive new concepts about the fairy realm, this mix of fantasy and science fiction will delight fans and make converts of new readers. An exhilarating Celtic caper that stands very nicely indeed on its own merits. (Fiction. 11-14) Copyright ©Kirkus Reviews, used with permission.
More book reviews at iDreamBooks.com