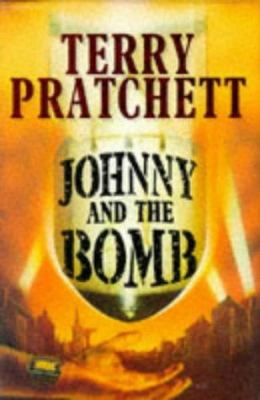 Johnny and the bomb.

Twelve-year-old Johnny Maxwell has a knack for being in the wrong place at the wrong time. This has never been more true than when he finds himself in his hometown on May 21, 1941, over forty years before his birth! An accidental time traveler, Johnny knows his history. He knows England is at war, and he knows that on this day German bombs will fall on the town. It happened. It's history. And as Johnny and his friends quickly discover, tampering with history can have unpredictable-- and drastic-- effects on the future. But letting history take its course means letting people die. What if Johnny warns someone and changes history? What will happen to the future? If Johnny uses his knowledge to save innocent lives by being in the right place at the right time, is he doing the right thing? Mixing nail-biting suspense with outrageous humor, Terry Pratchett explores a classic time-travel paradox in Johnny Maxwell's third adventure.

Suitable 12+. Sequel to 'Johnny and the dead'

The third and final book in Terry Pratchett's Johnny Maxwell Trilogy, Johnny and the Bomb finds the hero (first introduced in Only You Can Save Mankind) traveling back in time to WWII, in an attempt to stop a German bomb from falling on his English village. While seemingly disconnected from the plot of the first two books in the series, Pratchett's trademark humor and imaginative storytelling should leave readers considering war's lasting effects. (HarperCollins, $16.99 256p ages 8-up ISBN 9780-06-054191-0; Apr.) (c) Copyright PWxyz, LLC. All rights reserved

Gr 5-8-This trilogy ends with a bang. Having stumbled upon a way to travel through time, Johnny knows exactly when a German bomb will be dropped on his English village. Time travel turns out to be tricky, however, as it takes Johnny and his friends several trips to alter history just enough to save their town, but also to ensure that everything stays the same when they return home. Adding to the suspense is the imaginative vehicle of a crazy bag lady's squeaky cart to time travel, often with unpredictable results. The climax is reached at rocket speed as Johnny becomes increasingly aware of the many dimensions of time and ultimately relies on this ability to save the townsfolk. Pratchett deftly weaves alternate realities together to form a satisfying conclusion, keeping confusion at bay by treating the weightier issues of time travel with his trademark humor. Alternating between 1990s Britain and World War II, he offers plenty for thoughtful readers to mull over even as he pokes fun at the genre. While there is little connection to the other books in the series, Johnny's quirky sidekicks are back, each sidesplittingly portrayed and effectively advancing the plot. It is Johnny who cares most about the effect the war will have on his sleepy town, and up until the very last page, readers will, too.-Emily Rodriguez, Alachua County Library District, Gainesville, FL (c) Copyright 2010. Library Journals LLC, a wholly owned subsidiary of Media Source, Inc. No redistribution permitted.

(Intermediate, Middle School) Likable slacker Johnny Maxwell (Only You Can Save Mankind, rev. 7/05; Johnny and the Dead, rev. 1/06) and his gang of friends -- the totally uncool Yo-less, timid Wobbler, kleptomaniac skinhead Bigmac, and bossy know-it-all Kirsty -- land face-first in their third adventure when they discover that local bag-lady Mrs. Tachyon's shopping cart is a time machine. Transported back to 1941, they must save Wobbler from existential erasure, alter a tragic chapter of history by fixing an air-raid siren, and grapple with numerous Big Questions (""If time was a pair of trousers, what leg would we be in?"" is a frequent refrain). Obstacles include chance encounters with various forebears and Bigmac's unfortunate resemblance to a Nazi spy. The humor -- a classic Pratchett synergy of irony, wit, and slapstick -- is nonstop and arises naturally from the characters, with Kirsty the perfect vehicle for the author to gently lampoon the time travel genre. After scoffing at ""unintelligent children [in books] who go around saying 'gosh' [and] just drift along having an adventure [and] never seem to think of it as any kind of opportunity,"" she bemoans the turn of events that places her squarely in the center of such a situation: ""Me, and four token boys. Oh, dear...It's only a mercy we haven't got a dog."" With plenty of loopy logic, off-the-cuff philosophy, and hectic action, this trilogy cap-off is pure fun. Copryight 2007 of The Horn Book, Inc. All rights reserved. (c) Copyright 2010. The Horn Book, Inc., a wholly owned subsidiary of Media Source, Inc. No redistribution permitted.

Johnny Maxwell, earnest English lad, and his friends take on the tricky ethics of time-travel paradox in this, the concluding volume of The Johnny Maxwell Trilogy. Seems Johnny's been researching WWII for school, and when the local bag lady's shopping cart sends him and his cronies back to a critical moment, he needs to decide whether to warn the town of an impending Luftwaffe raid and change history or let the unaware residents of Paradise Street die. Pratchett being Pratchett, of course, this inquiry into the Butterfly Effect comes replete with giggles, from the antics of the hapless Bigmac (who nearly derails the mission when his WWII-era costume turns out to be a salvaged German uniform) to the kids' reappearance into modern times in a church basement during the Over-50s Keep-Fit class. Chuckles aside, it's Johnny's agony at the human suffering of the world that cuts to the bone and will keep readers tracking the moral debate at the core of the novel, as the always-angry Kirsty hews to theoretical absolutes while the always-worried Johnny grieves the world's madness. Complex, funny and, above all, impassioned. (Fiction. 10-14) Copyright ©Kirkus Reviews, used with permission.
More book reviews at iDreamBooks.com