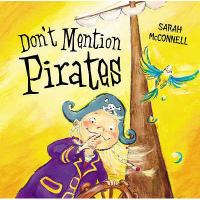 Scarlet Silver is a little girl who wants to become a piratejust like her aunt, Long Joan Silver. But there is one rule in the Silver house: Dont mention pirates. That rule has been in effect ever since the day that bad luck befell Grandma Silver. She was accidentally eaten by a giant shrimp. But Scarlet still wants to be a pirate. What she loves to do best is to go treasure hunting with her treasure detector. Most of the time she doesnt find anything valuable, but one day she discovers something that looks very much like real gold! The adventure that follows is complemented with color illustrations that are every bit as hilarious as the Silver familys story.

British author/artist McConnell's haphazardly told but ebulliently illustrated story focuses on a family in comic denial about the pirate blood coursing through their veins. (Grandma was none other than "Long Joan Silver" but she died tragically when a giant shrimp devoured her.) The silvers live in a "ship-shaped house" but their motto is "Don't mention pirates." Young Scarlet Silver yearns to embrace her heritage, and when she finds a gold nugget with her metal detector, she's overjoyed to see how it triggers the long-suppressed family DNA. Her mother, father and brother grab shovels and spoons and start digging, sporting kerchiefs and eye patches, and saying, "Aye!" By the time Grandpa reveals the true identity of the gold nugget, the family has dug out its destiny (one spread shows the ship-shaped abode precariously perched above a carved-out basin with nearby water pipes threatening to burst). McConnell devotes perhaps too much space to setting up Scarlet's obsession, and the treasure hunt goes on a bit. But her bright, cartoon-like watercolors emit high energy without feeling manic; the pictures will draw in readers with a genially goofy cast of characters and one goodhearted tickle after another. Ages 4-7. (June) (c) Copyright PWxyz, LLC. All rights reserved

PreS-Gr 2-Scarlet lives in a "ship-shaped house" inherited from her famous Grandma, "Long Joan Silver." The matriarch's unfortunate demise at the mouth of a giant shrimp led to the family renouncing the pirate way of life. However, Scarlet has a buccaneering spirit and can't resist her natural tendencies. When she discovers buried gold, the Silvers get carried away and dig such a deep hole that water pipes burst and their house falls over. Reclaiming their birthright, they sail away "in search of treasure, because that's what pirates do!" Colorful, buoyant watercolors capture the silly exaggerations of the text: Scarlet makes her brother walk the plank (into a wading pool), and the shiny nugget is revealed to be Grandpa's missing front tooth. This is a funny, swashbuckling tall tale.-Linda Ludke, London Public Library, Ontario, Canada (c) Copyright 2010. Library Journals LLC, a wholly owned subsidiary of Media Source, Inc. No redistribution permitted.

Scarlet Silver's family has one rule: Don't mention pirates! However, true to her roots, Scarlet--the granddaughter of Long Joan Silver--can't stop treasure hunting. When she finds a gold nugget, her family joins her search. Brightly colored watercolor and pencil illustrations add even more humor to the text, as the Silvers slowly slip back into the footsteps of their pirate ancestors. (c) Copyright 2010. The Horn Book, Inc., a wholly owned subsidiary of Media Source, Inc. No redistribution permitted. All rights reserved.

A family denies their pirate roots until the scent of buried treasure brings out the pirate in each of them. The Silvers live in a ship-shaped house bequeathed them by their Grandma, Long Joan Silver, after a terrible accident befell her--hence, the taboo on things piratical. But young Scarlet loves everything about pirates. When she discovers a gold nugget one day, the family goes slightly crazy in their quest for more, tying back their hair with bandanas, protecting their eyes from flying mud with patches and adopting pirate lingo. When they eventually dig out their ship house and it's afloat, they finally admit they're pirates after all. Obvious inconsistencies plague the text--Dad builds Scarlet a treasure detector, despite the taboo, and Scarlet seems uncharacteristically unenthusiastic about her family's transformations. But for fans of pirates, McConnell's bright watercolor illustrations with their humorous details may be enough to salvage the text. Potential pirates will want to uncover this treasure; others may best leave it buried. (Picture book. 4-7) Copyright ©Kirkus Reviews, used with permission.