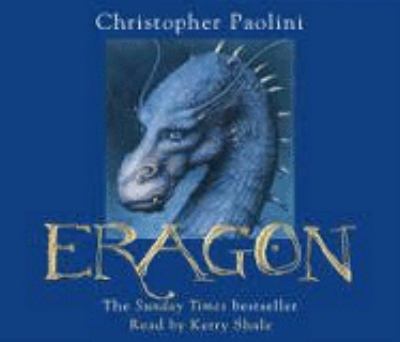 | Teen fantasy fiction | Teen audio booksGenre/Form: Children's audiobooks. | Fantasy fiction. | Audiobooks.Read by Kerry Shale.Summary: In Alagaesia, a fifteen-year-old boy of unknown lineage called Eragon finds a mysterious stone that weaves his life into an intricate tapestry of destiny, magic, and power, peopled with dragons, elves, and monsters.
Tags from this library: No tags from this library for this title. Log in to add tags.
Fiction notes: Click to open in new window

One boy ...One dragon ...A world of adventure. When Eragon finds a polished stone in the forest, he thinks it is the lucky discovery of a poor farm boy; perhaps it will buy his family meat for the winter. But when the stone brings a dragon hatchling, Eragon soon realizes he has stumbled upon a legacy nearly as old as the Empire itself. Overnight his simple life is shattered and he is thrust into a perilous new world of destiny, magic and power. With only an ancient sword and the advice of an old storyteller for guidance, Eragon and the fledgling dragon must navigate the dangerous terrain and dark enemies of an Empire ruled by a king whose evil knows no bounds. Can Eragon take up the mantle of the legendary Dragon Riders? The fate of the Empire may rest in his hands ...Kerry Shale's reading turns this magnificent adventure into a thrilling audiobook for fans of all ages.

In Alagaesia, a fifteen-year-old boy of unknown lineage called Eragon finds a mysterious stone that weaves his life into an intricate tapestry of destiny, magic, and power, peopled with dragons, elves, and monsters.

In the first volume in Paolini's planned Inheritance trilogy, 15-year-old Eragon discovers an odd blue gemstone while exploring an infamous stretch of forest. It is a dragon egg, fated to hatch in his care. Eragon quickly develops a psychic connection with the female dragon that emerges, whom he names Saphira ("His emotions were completely open to her mind, and she understood him better than anyone else"). Eragon narrowly escapes doom with Saphira's help, but the uncle who raised him is killed, setting up a robust revenge/adventure tale. The scope quickly expands: Eragon turns out to be the first of a new generation of Riders, a lodge of legendary dragon-riding warriors killed by the evil King Galbatorix. As a result, he becomes the focal point in a war between Galbatorix's forces and the resistance efforts of the Varden. Paolini, who was 15 years old himself when he began this book, takes the near-archetypes of fantasy fiction and makes them fresh and enjoyable, chiefly through a crisp narrative and a likable hero. He carries a substantial Tolkien influence-fanciful spellings of geographical names, the use of landscape as character, as well as the scale and structure of the story itself. But his use of language dispenses with the floral, pastoral touch in favor of more direct prose. The likeness does not end there: the volume opens with a detailed map of Paolini's world, and ends with a glossary and pronunciation guide for his invented language. An auspicious beginning to both career and series. Ages 12-up. (Aug.) (c) Copyright PWxyz, LLC. All rights reserved

Gr 7 Up-Christopher Paolini creates memorable characters in a detailed fantasy world (Knopf, 2003) in this tale about Eragon, a teenager who is newly homeless and uncertain of his ancestry, but meets his destiny head on. The odd blue "stone" he found has hatched into a dragon. He and Safira are able to communicate telepathically, so even when they are parted during their high and low adventures with magicians, dwarves, inhuman monsters sent to do the evil king's bidding, elves, and simply crafty humans, they are able to work together as a team. Paolini has received some popular press because of his own youth, and indeed some of the details here are naive-Medieval common people certainly didn't retire to their own personal bedrooms!-but overall he has designed a well integrated epic, complete with a Latinate language, politically acute issues, and well-realized emotions. Narrator Gerard Doyle's extensive repertoire of voices provides a compelling atmosphere that will hold the audience's attention through Eragon's travails. His slightly British accent lends just the right storytelling texture, making the audio performance an extension of the story itself. In addition to fans of Tolkien and Bradley, this will appeal to listeners looking for psychological suspense accessible to teens and adults alike.-Francisca Goldsmith, Berkeley Public Library, CA (c) Copyright 2010. Library Journals LLC, a wholly owned subsidiary of Media Source, Inc. No redistribution permitted.

Gr. 7-12. Was the mysterious blue stone that appears out of nowhere sent by accident or is teenage Eragon meant to have it? When a dragon, Saphira, hatches from it, beast and boy connect (in much the same way dragons and riders do in Anne McCaffrey's popular Pern series) and face danger together. In this story, Eragon is thrust into a new role as the first Dragon Rider in more than 100 years who is not under the evil king's control. After the king's ghastly minions kill Eragon's uncle as they search for the teen, Eragon and Saphira, mentored by the village's aged storyteller, hunt for the killers and, in turn, find themselves being hunted. This unusual, powerful tale, begun when Paolini was 15 (he's now 19) and self-published in 2002 before being picked up by Knopf, is the first book in the planned Inheritance trilogy. It's obvious that Paolini knows the genre well--his lush tale is full of recognizable fantasy elements and conventions. But the telling remains constantly fresh and fluid, and he has done a fine job of creating an appealing and convincing relationship between the youth and the dragon. It's an impressive start to a writing career that's sure to flourish. --Sally Estes Copyright 2003 Booklist

This lengthy first novel borrows heavily from its fantasy predecessors but never hatches an original idea. Fifteen-year-old Eragon joins a war against the Empire and journeys across Alagaësia after finding and bonding with a dragon. The endless journeying becomes tedious, dialogue too often substitutes for action, and the shopworn story line lacks narrative drive. From HORN BOOK Spring 2004, (c) Copyright 2010. The Horn Book, Inc., a wholly owned subsidiary of Media Source, Inc. No redistribution permitted.

This solid, sweeping epic fantasy crosses vast geography as it follows 15-year-old Eragon from anonymous farm boy to sword-wielding icon on whose shoulders may rest the fate of Alagaësia. Dragon Riders have died out over the years, leaving the Empire under the iron fist of King Galbatorix; but hunting in the forest one day, Eragon finds a blue stone that soon hatches into his very own dragon. The next months find him learning magic, sword skills, and bits of his land's history. A slight tone of arrogance running through the narrative voice will hardly bother readers busily enjoying the reliable motifs of elegant immortal elves, mining dwarves, a wise elderly man, and a hero of mysterious birth. Replete with histories, names, and languages, this high fantasy with visible Tolkien influence ends with Eragon's first battle and a tempting pointer towards the second installment, when Eragon will visit the unseen elven city and plunge headlong into his destiny. (map, pronunciation key, glossaries of three created languages) (Fantasy. YA) Copyright ©Kirkus Reviews, used with permission.
More book reviews at iDreamBooks.com