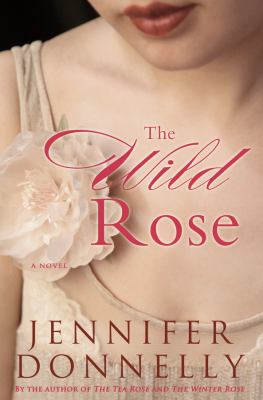 The third book in the sweeping, multi-generational saga that began with The Tea Rose , The Wild Rose is a "lush story of epic proportions" ( Romantic Times Book Review ).
The Wild Rose is a part of the sweeping, multi-generational saga that began with The Tea Rose and continued with The Winter Rose . It is London, 1914. World War I looms on the horizon, women are fighting for the right to vote, and explorers are pushing the limits ofendurance in the most forbidding corners of the earth. Into this volatile time, Jennifer Donnelly places her vivid and memorable characters: Willa Alden, a passionate mountain climber who lost her leg while summiting Kilimanjaro with Seamus Finnegan, and who will never forgive him for saving her life; Seamus Finnegan, a polar explorer who tries to forget Willa as he marries a beautiful young schoolteacher back home in England; Max von Brandt, a handsome German sophisticate who courts high society women, but has a secret agenda in wartime London.

Many other beloved characters from The Winter Rose continue their adventures in The Wild Rose as well. With myriad twists and turns, thrilling cliffhangers, and fabulous period detail and atmosphere, The Wild Rose provides a highly satisfying conclusion to an unforgettable trilogy.

Sequel to : The winter rose.

Bibliography: p. 617-623. -In 1914, with World War I approaching, polar explorer Seamus Finnegan tries to forget Willa, a passionate mountain climber, as he marries a beautiful young woman back home in England.

Includes bibliographical references. -In 1914, with World War I approaching, polar explorer Seamus Finnegan tries to forget Willa, a passionate mountain climber, as he marries a beautiful young woman back home in England.

In 1914, with World War I approaching, polar explorer Seamus Finnegan tries to forget Willa, a passionate mountain climber, as he marries a beautiful young woman back home in England.

As in Donnelly's The Tea Rose and The Winter Rose, a pair of lovers must survive misunderstandings, betrayals, physical dangers, and emotional upheavals before they find happiness. After a climbing mishap on Kilimanjaro, Seamus Finnegan manages to save Willa Alden's life, but she loses one of her legs. Embittered and despairing, Willa seeks refuge in Tibet, while Seamus gains fame through polar expeditions. When the novel opens eight years later, in 1914, Europe is poised on the brink of war. Amid social and political ferment, Seamus marries Jennie Wilcott, pregnant with his child. Willa's return for her father's funeral results in a passionate affair that ends abruptly when Willa's brother confronts her. By 1918, Willa is using her photography skills in Arabia to support Tom (T.E.) Lawrence's spy network, while Seamus commands a navy ship in the Mediterranean. Their paths converge at several points as they survive disasters such as a plane crash, a submarine attack, imprisonment, and torture. Familiar characters from the earlier novels also reappear. VERDICT Donnelly skillfully integrates historical detail while entwining multiple plotlines in a fast-paced narrative. Readers of the earlier books will be especially eager for this volume, which should also earn the author new fans.-Kathy Piehl, Minnesota State Univ. Lib., Mankato (c) Copyright 2011. Library Journals LLC, a wholly owned subsidiary of Media Source, Inc. No redistribution permitted.

The conclusion to Donnelly's Rose trilogy that began in 1880s England moves to London on the brink of WWI, with a one-legged (she lost the other climbing Kilimanjaro) English beauty who enchants the Dalai Lama, accompanies Lawrence in Arabia, and outwits a German spy. But for all her accomplishments, Willa Alden struggles with her feelings of love for explorer Seamus Finnegan, who saved her life by carrying her wounded off the mountain. She can't forgive him for that, in despair over what she believes is the end of her adventurous life. Seamus marries to forget Willa, but the ploy doesn't work and they meet again in London. Added to the mix is charming, dangerous, spymeister Max von Brandt, who wrecks havoc and commits murders in high society. Implacably energetic, Donnelly (The Tea Rose; The Winter Rose) treks readers through London, Africa, Asia, and Antarctica, but its Willa's Middle Eastern desert wanderings that give the novel epic pretensions. Donnelly re-casts "Lawrence of Arabia" as modern romance, placing her derring-do heroine at the center of iconic images of the era: Willa lectures the Bloomsbury group about Everest and photographs the Arab uprising before the Turks take her prisoner. Seamus, not to be outdone, crosses Antarctica with both Shackleton and Amundsen, then fights at Gallipoli. Forget logic, (dead characters don't always stay dead) suspend belief, and enjoy the ride: 600-plus pages of romance, harrowing exploits, cinematic backdrops, cliffhangers, and plot twists. (Aug.) (c) Copyright PWxyz, LLC. All rights reserved.

Readers greet old friends in this final book of the Rose Trilogy, about life in the early twentieth century, complete with explorers, daredevils, immigrants, criminals, spies, and high-society dilettantes. Donnelly cleverly intertwines the stories from The Tea Rose (2002) and The Winter Rose (2008) to remind us of what went on before this even-more tumultuous and deliciously long saga, set in the unsettled years prior to the Great War. Th. wild ros. of the title is Willa Alden, a wiry and wounded mountaineer living near Mount Everest and working as a photographer for the National Geographic Society after the accident that took her leg and her lover. In a complex web of plots and surprise coincidences, two men, neither quite who he seems, are inexorably drawn to Willa. Subplots and descriptive details lend a realistic sense of everyday life at the time, reflecting the wide class chasm and portraying how one woman can change the lives of so many. Willa is a conflicted character readers won't forget. This time around, Donnelly has leaned more toward Indiana Jones than Barbara Taylor Bradford, and the result is a perfect vacation read.--Baker, Je. Copyright 2010 Booklist

Want to end the war to end all wars? Put a mountaineerand a woman mountaineerto the task.Willa Alden isn't just any mountaineer, at least not by genre novelist Donnelly's account. In a thick, overly long narrative peopled by a few returnees fromThe Winter Rose (2008, etc.), Willa is a standout, admirable in her many strengths. But then, just about everyone in this story is strong in his or her own mtier, from Winston Churchill to charm-the-pants-off-anyone Kaiserian spy Max von Brandt. Heck, even the Dalai Lama is a brickand a pal of Willa's, natch, who "on occasion...would drink with her, sing Tibetan songs with her, and swap bawdy stories." But all these are wimps next to Willa's true amour, Seamus Finnegan, fearless polar explorer and breathless lover, who has gotten himself into countless scrapes with her and left her wanting only once, and then by way of something in a limb. (You'll have to read the book for the details.) "You're a very dashing figure, you know," says one admirer of Seamie's. "You've achieved so much, done so many amazing things." Seamie knows, yet the one thing he wants eludes him. Meanwhile, old Max is up to no good, for these, after all, are the stirring years of World War I, and his job is to embarrass smarty-pants Britons and exalt Teutons everywhere. By the end of this endless exercise in historical fiction, one that gets all the details right except the way people spoke to each other a century ago, Max, Seamie and Willa have been replaying the Perils of Pauline in the company of Lawrence of Arabia, a perplexing and improbable turn of events that at least moves the plot along. Thank goodness Willa has picked up conversational Arabic and Turkish along the way. "Jamal Pasha is coming! Jamal Pasha is coming!"But is Max that much a rotter, and Seamie that much a hero? Read this aspirational potboiler and find out. Or not.]] Copyright Kirkus Reviews, used with permission.
More book reviews at iDreamBooks.com