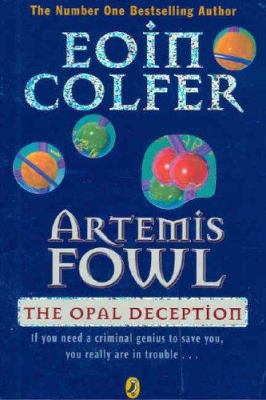 Evil pixie Opal is back and more dangerous than ever. This time she doesn't just want power over the fairy people, this time she wants the lot. Ages 9+ years.

Followed by: Artemis Fowl and the lost colony.

Popular series continue to take readers far and wide with some favorite escorts. In the fourth adventure about the teen criminal mastermind, Artemis Fowl: The Opal Deception by Eoin Colfer, fans can cheer that the antihero did not retire, as he had threatened in The Eternity Code. However, his career is now in peril because all memory of the fairy people (even the wicked Opal Koboi) has been erased from memory; and Opal has framed Capt. Holly Short for the murder of Commander Root of the LEPrechon fairy police. (c) Copyright PWxyz, LLC. All rights reserved

Gr 5-7-Artemis Fowl has returned to his fiendish ways in the fourth book (Miramax, 2005) in Eoin Colfer's series about the 14-year-old criminal mastermind. Although his mind was cleared of any memories of the fairy world in the third book, it's not long before Artemis encounters many of his old cohorts. His archenemy, Opal Koboi, is no longer an imprisoned coma patient; she escaped by cloning herself and now has plans for the destruction of the Lower Elements and for world domination. Artemis needs the help of all his allies in this world and in the fairy world to stop the powerful and dangerous Opal. Nathanial Parker's superior talent for narration is wonderfully showcased in this rollicking tale of identity theft, intrigue, and adventure. He uses many different British accents and dialects to make both the human and the supernatural characters come alive, and his pacing is faultless throughout the dialogue and the narrative. Fans of the series will be delighted to join Artemis and his associates for another fantastic tale of the underworld, complete with gaseous dwarves and extraordinary technology. A great choice for fantasy lovers in school and public libraries.-Casey Rondini, Hartford Public Library, CT (c) Copyright 2010. Library Journals LLC, a wholly owned subsidiary of Media Source, Inc. No redistribution permitted.

Gr. 6-9. The fourth book in the Artemis Fowl saga follows The Eternity Code (2003), in which Artemis' mind was wiped clean of any memories of the belowground world of elves, pixies, and dwarves. In this book, Artemis has reverted to his old life of crime. His archenemy, Opal Koboi, has been in a self-induced coma for a year, plotting revenge on all who thwarted her earlier evil doings. After cloning herself, she escapes and sets her plans in motion, going first to find LEPrecon Captain Holly Short and Commander Root, then taking on Artemis as she schemes to destroy the fairy world. As in all the books, this one has plenty of action as well as great humor and clever plot manipulations. Characters are once again fully realized, and fans will eagerly enter into the spirit of the action. --Sally Estes Copyright 2005 Booklist

After having his memory of all things fairy wiped clean, fourteen-year-old Artemis finds himself in the company of elves, dwarves, and pixies who all claim to know him--and one of whom wants him dead. The lack of any real character development and the mundane revenge plots will most likely be ignored by fans who will enjoy the non-stop action and techno-gadgets. (c) Copyright 2010. The Horn Book, Inc., a wholly owned subsidiary of Media Source, Inc. No redistribution permitted. All rights reserved.
More book reviews at iDreamBooks.com