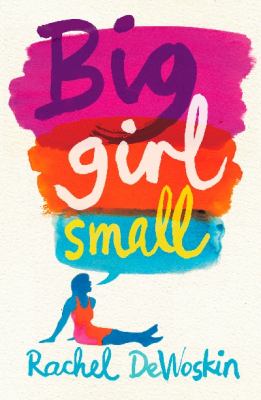 Genre/Form: Contemporary fiction. | General fiction.Summary: Judy Lohden is your above-average sixteen-year-old: sarcastic and vulnerable, talented and uncertain, full of big dreams for a big future, with a singing voice that can shake an auditorium. So why is a girl this promising hiding out in a seedy motel room on the edge of town? The fact that the national media is on her trail after a controversy that might bring down the whole school could have something to do with it, but it also has something to do with the fact that Judy is three feet nine inches tall.
Tags from this library: No tags from this library for this title. Log in to add tags.

Big Girl Small is a novel for women of all ages; for every girl who is, or was, a teenager. Everybody needs a friend like Judy. She is whip-smart, hilarious, and her story is so real. She's a wonderful singer, full of big dreams for a big future - and she's a dwarf. But why is she hiding out in a seedy motel on the edge of town? Who are her friends? And why can't she face her family? Big Girl Small is a gut-wrenching teen-tragedy told with laugh-out-loud humour. Every reader will recognise the anxiety of trying to be different, to be the same, to find out who you are and what your hormones are doing, and what you might want to do in the future. Most of us don't really know, and this brave novel shows us that's just fine.

Judy Lohden is your above-average sixteen-year-old: sarcastic and vulnerable, talented and uncertain, full of big dreams for a big future, with a singing voice that can shake an auditorium. So why is a girl this promising hiding out in a seedy motel room on the edge of town? The fact that the national media is on her trail after a controversy that might bring down the whole school could have something to do with it, but it also has something to do with the fact that Judy is three feet nine inches tall.

The transition to high school is fraught with opportunities for confusion and heartbreak. Add in the challenges of transferring to a fancy arts school and of being 16 years old and only 3'9" tall, and coming of age takes on a whole new character. Judy Lohden possesses a great voice, a tiny body, compassionate parents, and a need to strike out on her own. She manages the initial challenges of finding her way around the social politics of Darcy Academy but gets derailed by a handsome senior who thoughtlessly takes advantage of her crush, betraying her on video and pushing their story to the national media. VERDICT It's worth the read to spend nine days with Judy as she hides out in the Manor Motel and reflects upon her life and events that propelled her into hiding and finds her way back into life, a little older and much wiser. The layering in of what it feels like to be seen as disabled gives an old story line new depth. Sure to appeal to fans of coming-of-age fiction and readers who enjoyed DeWoskin's acclaimed memoir, Foreign Babes in Beijing, and her debut novel, Repeat After Me. [See Prepub Alert, LJ 11/1/10.]-Jan Blodgett, Davidson Coll. Lib., NC (c) Copyright 2010. Library Journals LLC, a wholly owned subsidiary of Media Source, Inc. No redistribution permitted.

DeWoskin's daring third book (and second novel after Repeat After Me) takes on sexual politics, physical beauty, pity, and violence, and succeeds in giving readers a nuanced and provocative treatment without descending into pedantics or hysteria. Bright and sardonic Judy Lohden, a 16-year-old dwarf freshly enrolled in Ann Arbor's Darcy Arts Academy, falls victim to "the worst Steven King Carrie prank in the history of dating" at the hands of popular boy Jeff Legassic, who becomes an object of desire as soon as he and Judy meet cute the first week of school. The book opens with Judy hiding out in a seedy motel; throughout the novel, she slowly unveils her secret and reveals her two visions of herself-that of a pretty teenage girl with an hourglass figure who happens to be three feet nine inches tall, and that of a sideshow attraction. It's a rare author who is willing to subject her protagonist to the extreme ranges of degradation and redemption to which DeWoskin subjects Judy; thankfully, she manages it beautifully. (Apr.) (c) Copyright PWxyz, LLC. All rights reserved.

*Starred Review* Hiding out in a seedy motel room on the outskirts of Ypsilanti, Michigan, 3-foot-9-inch Judy Lohden narrates, in an epic dwarf download, what transpired when she transferred to a performing-arts high school her junior year. Tired of being protected by her concerned parents, Judy lobbies to transfer to the elite school, convinced that her powerful vocal skills will ensure her a place in the popular clique. And she seems well on the way to realizing her ambitions after she makes a huge impression at her auditions and is placed in senior voice. She quickly makes friends with two quirky female students and develops a crush on handsome and popular Jeff Legassic. But what starts out as an innocent infatuation quickly descends into a sordid relationship when she discovers that Jeff is not the easygoing charmer he first seemed. A sex tape released on the Internet catches the attention of the national media, and Judy not only must process her personal trauma but also deal with the fact that her humiliation has gone viral. DeWoskin deftly captures the often vicious dynamics of adolescents, which mask their fragility, and creates in Judy an unforgettable character, one who is, by turns, sardonic and heartbreakingly vulnerable.--Wilkinson, Joanne Copyright 2010 Booklist

DeWoskin (Repeat After Me, 2009, etc.) combines two reality-TV staplesteenage sex scandals and little peoplein this story about a gifted high-school junior whose struggle to fit in is compounded by her height (3'9").Judyshort but a gifted writer with a huge singing voicehas just transferred from public high school to Ann Arbor's elite Darcy Arts Academy. She's not sure if the popular Darcy kidsbeautiful, seemingly friendly Ginger in particularare mean girls and mindless hunks or just adolescently neurotic, but Judy quickly makes two genuine if nerdy friends. She also develops an immediate crush on Jeff, who moved to town only a year ago and seems nicer than the other kids in his crowd. Soon after he talks to Judy flirtingly at a Halloween party, Ginger comes over to Judy's house and warns her that Darcy boys can't be trusted. But when Jeff offers Judy a ride home one day shortly before Thanksgiving, she can't believe her luck. They have sex. She's sure she is in love although he does not treat her like a girlfriend in public, so she doesn't tell anyone. They continue to have occasional sex until the February night he asks her over and tells her about causing his younger sister's death when he was drunk. They end up drinking with two of his friends. Judy wakes up at his house the next morning naked, with no memory of what happened. Soon enough she learns that a tape is circulating at the school showing her having sex with all three boys. Because of her height, she is considered "handicapped," and everyone considers her a tragic victim, making her humiliation worse. She tells her story while hiding in a seedy motel until she is ready to return home to her loving family and friends.DeWoskin creates a compelling voice for Judy and performs neat literary magic, confronting the stereotypes of teen fiction even as she uses them to pull the readers' heartstrings.]] Copyright Kirkus Reviews, used with permission.
More book reviews at iDreamBooks.com