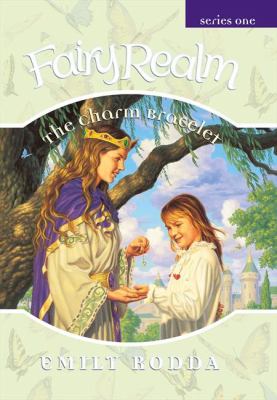 When Jessie visits her grandmother's house, Blue Moon, she discovers an amazing secret, and enters the Fairy Realm for the first time. All kinds of magical beings live in the Realm, and a noble Queen in a great golden palace rules them all.But the Realm is in danger, and Jessie must outwit an evil enemy to save it before it's destroyed forever

Rodda (Rowan of Rin series) launches the Fairy Realm series with this taut, engaging fantasy tale. Jessie visits her maternal grandmother, Jessica, at Blue Moon, a rambling old house with a "secret garden" where Jessie feel safe and peaceful. For five years, the woman has lived alone, since the death of her husband, a renowned artist who painted scenes featuring castles, fairy princesses, elves and miniature horses. Jessie shares more with her grandmother than a name: each always seems to know how the other is feeling. Suddenly Jessie becomes aware that her grandmother, who has been weakened by a fall, is in some kind of grave trouble and that she must help her. Following a voice beckoning her to the secret garden one night, Jessie is transported to a fairyland that she recognizes from one of her grandfather's paintings-his last. Rodda deftly fits together the pieces of a creatively complex puzzle whose fragments include a missing charm bracelet, a cloak that renders the wearer invisible and a secret spell that must be used-once in a blue moon-to renew the magic in the land of Jessica's birth. Despite what sound like familiar elements, an intriguing plot and appealing characters make this a sure choice for budding fantasy fans. Readers will likely wish to accompany Jessie on her second adventure, The Flower Fairies, due out the same month. Ages 7-10. (Mar.) (c) Copyright PWxyz, LLC. All rights reserved

Gr 1-4-Jessie's grandmother's health is failing rapidly and the woman seems unconcerned that the charm bracelet she always wore is missing. She knows she had something important to do before her upcoming 70th birthday, but she can't remember what. In a parallel world, the fairies are trying to save their kingdom from an evil ruler. Jessie accidentally travels to that world, becomes embroiled in their struggles, and saves the day by retrieving the magical charm bracelet, thereby restoring her grandma's memory of her connection to the fairy world and what she must do. It's all a bit predictable, but beginning chapter-book readers will appreciate Jessie's take-charge attitude to defeat the evil usurper and revel in her success at saving her grandmother and the fairy kingdom. Geared toward transitional readers, the short chapters each begin with one full-page, black-and-white illustration, aptly showing the magic of the book.-Debbie Whitbeck, West Ottawa Public Schools, Holland, MI (c) Copyright 2010. Library Journals LLC, a wholly owned subsidiary of Media Source, Inc. No redistribution permitted.

Gr. 2^-5. Although this is for a slightly younger audience than her Rowan of Rin books, Rodda's latest, first in the new Fairy Realm series, will also have kids sitting on the edge of their seats. Every 50 years or so ("once in a blue moon"), the magic of the Realm must be renewed to prevent the evil trolls of Outland from overtaking the kindly creatures of the land. The person entrusted with renewing the magic is the Realm's true queen, Jessica, who, years before, fell in love with a mortal and moved to his world, promising to return at the blue moon to renew the Realm's magic. Taking advantage of the situation, evil cousin Valda intervenes, hoping to destroy the Realm. It's Jessica's spunky granddaughter, Jessie, who comes to the rescue. Cats, one good and the other evil; a talking horse; a nervous elf; and a "cloak of invisibility" aid Jessie in assisting her weak, aged grandmother in fulfilling her queenly obligation. Intergenerational teamwork and a girl's levelheaded thinking combine with intrigue and imagination in this exciting fantasy. --Ellen Mandel

Jessie, whose grandmother is secretly queen of the fairy realm, meets some pixies on her birthday and has a grand time with them, pixie-size, until a wind blows her away; a parrot and some rainbow fairies help her get home. Although less substantial than other titles in this series, the book's compact plot and realistic, soft-edged black-and-white art will appeal to young readers. From HORN BOOK Fall 2003, (c) Copyright 2010. The Horn Book, Inc., a wholly owned subsidiary of Media Source, Inc. No redistribution permitted.
More book reviews at iDreamBooks.com