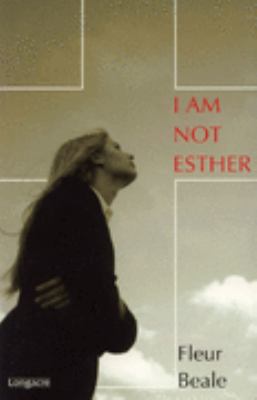 I am not Esther / Fleur Beale.

Without warning, everything familiar to Kirby is snatched away. Even her name is changed. There is no television or radio. She must wear modest clothes and behave in a godly fashion. Her experience of life in a fundamentalist cult is drawn in convincing detail, building to a battle over identity.

Novel for young adults. When Kirby's mother tells her she is going away for two years, and is leaving her with relatives she's never heard of, it is every teenage girl's nightmare. These relatives are members of a closed religious sect. They have no television, radio, newspapers or mirrors and Kirby must wear long, modest clothes and behave in a 'Godly' way, or else. They even give her a new biblical name, Esther. Suggested level: intermediate, secondary.

In what PW called "sort of a Handmaid's Tale for the junior-high set, Beal's engrossing novel peers into a rigidly traditional (and fictional) Christian sect." Ages 12-up. (July) (c) Copyright PWxyz, LLC. All rights reserved

Gr 7-10-Kirby, 14, comes home from school to find her usually good-natured "dizzy flake" of a mom crying. The mystery deepens when her mother announces her intention to leave New Zealand almost immediately to work as a nurse in Africa, and ships the teen off to live with an uncle she's never met. Caleb and his family are members of a sect called the Fellowship of the Children of the Faith, and their house has no mirrors, no TV, no radio, no newspapers, and virtually nothing to read but the Bible. Her uncle renames her "Esther" and though she is by turns feisty and irreverent, she quickly learns that everyone suffers when she breaks the rules because discipline consists mostly of grueling prayer sessions that all family members are required to attend. Beginning to find her place among the six siblings, Kirby cannot understand why no one will talk about another sister, Miriam, who died just four weeks earlier. She enjoys increasingly unguarded conversations with her cousin Daniel, who secretly wishes to continue his education and become a doctor, but is horrified by the rigidity and brutality of this male-dominated fundamentalist society. The author builds tension well, introducing layers of conflict, revealing elements of the plot realistically and plausibly. The climax shocks and the resolution feels right. While understanding the comfort and peace that some believers feel, in the end it is clear to Kirby that such strict beliefs limit people, dictating too much of what can't be done instead of allowing personal initiative and creativity to flourish.-Joel Shoemaker, Southeast Junior High School, Iowa City, IA (c) Copyright 2010. Library Journals LLC, a wholly owned subsidiary of Media Source, Inc. No redistribution permitted.

Gr. 7^-10. When her quirky mother takes off, 14-year-old Kirby is left with her uncle's family, whom she has never met. An elder in a strict religious cult, Uncle Caleb changes her name to Esther, dictates old-fashioned clothing and language, and conducts lengthy family prayer sessions for her salvation. Rebellious Kirby constantly makes him angry, but she learns that being an integral part of a family is very satisfying, even when it includes hard work and few tangible rewards. In fact, when she is given the opportunity to escape, she finds it difficult to leave. New Zealand author Beale paints a universal picture of the mind-altering, abusive nature of cults. Openly defiant Kirby almost assumes the persona of obedient, subservient "Esther" just as the "great experiment" had planned. Yet with the support of a sympathetic school guidance counselor and a kind older "brother," she does find the strength to halt that dangerous slide. Although the story is too quickly and tidily wrapped up, it is an uncomfortable picture of the seductive nature of cults from a young person's perspective. --Frances Bradburn

(Middle School, High School) Kirby's world changes completely when her free-spirited mother announces-on Christmas-that they are moving, in two days time, from Auckland to Wellington. On the way there, Mum reveals another twist: it seems that Kirby is moving to Wellington, but Mum herself is going with a relief group to Africa, leaving Kirby in the care of an uncle she's never heard of, let alone met. New Zealand writer Beale accomplishes this setup in a swift fifteen pages; what follows is a gripping psychological survival story, as Kirby finds herself renamed ""Esther"" by her uncle and his strict, religious family, members of a sect known as the Fellowship of the Children of the Faith. While Beale gives Kirby's new family and their beliefs most of the earmarks of extreme Christian fundamentalism (no TV, conservative dress, long hours of prayer and Bible-reading), the picture is nuanced, with unexpected moments of both generosity and hypocrisy shown throughout. The children attend public school, where Kirby/Esther meets a sympathetic guidance counselor well versed in dealing with the children of the Children, who counsels patience and endurance and initiates a search for Kirby's mother, an offstage drama that heightens the suspense of the main story. Although the overlong closing reconciliation seems scripted from an Oprah chat, the novel as a whole is more like a well-paced Lifetime movie, with shifting relationships and action-propelling dialogue that will quickly get and firmly keep readers invested. (c) Copyright 2010. The Horn Book, Inc., a wholly owned subsidiary of Media Source, Inc. No redistribution permitted. All rights reserved.

While Kirby's mother is a most efficient and admired nurse, at home she can't seem to get it together, leaving the daily details to Kirby. Suddenly over the Christmas holidays, Mom announces she's going to leave New Zealand for Africa to work with refugees and Kirby must stay for an undetermined amount of time in a distant city with heretofore-unknown relatives. Arriving at the home of Aunt Caleb and Aunt Naomi, Kirby discovers that these relatives are staunch members of an extreme religious group that demands plain living by the "Rule." Horrified, she tries to flout the many requirements for her dress and behavior only to discover that the other children in the family are punished by having to submit to endless kneeling and prayer until she obeys. Trying to cope until she can contact her mother, Kirby becomes Esther (only Biblical names are acceptable) and an essential, if grudging part of the family. An older sister, termed "dead" because she has been cast out has left a gap, which Esther begins to fill. Beale portrays the submission of one's will as offering safety and security to believers, even as she shows the damage and pain. This dichotomy allows readers to see that the cold heartlessness of Uncle Caleb is a result of his trying to do what he thinks is right because he loves his family. The complexity of the ethical questions is nicely balanced by psychologically realistic portrayals of the effect of the sect on the characters in the past and present. A somewhat predictable denouement doesn't prevent this from being an engaging and credible survival story of an unusual nature. (Fiction. YA)
More book reviews at iDreamBooks.com