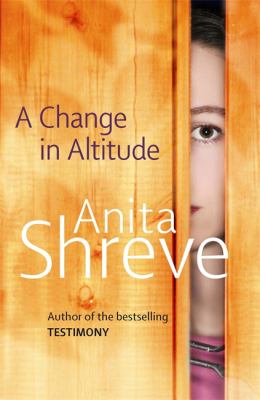 A change in altitude / by Anita Shreve.

Genre/Form: Domestic fiction. | General fiction.Summary: Newlyweds Margaret and Patrick join a climbing expedition to Mount Kenya, and during their harrowing ascent, a horrific accident occurs. In the aftermath of the tragedy, Margaret struggles to understand what happened on the African mountain and how these events have transformed her and her marriage, perhaps forever.
Tags from this library: No tags from this library for this title. Log in to add tags.
Fiction notes: Click to open in new window

Margaret and Patrick, married just a few months, set off on a great adventure - a year living in Kenya. While Patrick practices medicine, Margaret works as a photojournalist, capturing a dizzying and sometimes dangerous city on film.

When a British couple invites the newlyweds on a climbing expedition to the summit of Mount Kenya, they eagerly agree. But during their arduous ascent a horrific accident occurs. In its aftermath, Margaret struggles to understand what happened on the mountain and how it has transformed her and her marriage, perhaps for ever. With stunning language and striking emotional intensity, A Change in Altitude illuminates the irrevocable impact of tragedy and the elusive nature of forgiveness.

Newlyweds Margaret and Patrick join a climbing expedition to Mount Kenya, and during their harrowing ascent, a horrific accident occurs. In the aftermath of the tragedy, Margaret struggles to understand what happened on the African mountain and how these events have transformed her and her marriage, perhaps forever.

Margaret and Patrick are 28-year-old Bostonians living in Kenya in 1977. He's a doctor researching tropical diseases, while she dabbles in photography. They live in the guest house of Brits Arthur and Diana. An impulsive plan to climb to the top of Mount Ken-ya elicits varied responses from the group, which eventually will include a Swiss couple as well. While most see a challenge, if a mild one, Margaret is terrified, scrambling for a way to back out. Ultimately, tragedy strikes, and everyone, including Patrick, looks to Margaret as its cause. The country's race relations contribute to Margaret's feelings of remorse, pushing her to find a job and perhaps a new love. VERDICT The usual pinpoint precision of Shreve's (Testimony) prose is not in evidence here, as readers must work to discover the novel's time frame, and accusations of Margaret's complicity in the accident seem out of proportion, as does her sense of guilt. People who might consider an excursion to Mount Kenya will undoubtedly cancel their airfare and buy a new armchair instead. Shreve fans will demand this one, though. [See Prepub Alert, LJ 6/15/09; online reading group guide.]-Bette-Lee Fox, Library Journal (c) Copyright 2010. Library Journals LLC, a wholly owned subsidiary of Media Source, Inc. No redistribution permitted.

Shreve (Testimony), who worked in Kenya as a journalist early in her career, returns to that country in her slow latest, the story of a photojournalist and her doctor husband, whose temporary relocation abroad goes sour. The year-long research trip is an opportunity for Patrick, but leaves Margaret floundering in colonialist culture shock, feeling like "an actor in a play someone British had written for a previous generation." When a climbing trip to Mt. Kenya goes fatally wrong, Margaret's role in the tragedy drives a quiet wedge between the couple. Compounding those stressors are multiple robberies and adulterous temptations, as well as Margaret's freelance work for a "controversial" newspaper. Written in a strangely emotionless third person, the novel is stuffed with travelogues and vignettes of privileged expatriate life, including the chestnut of Margaret feeling very guilty about being given a rug she admires. While some of these moments aren't bad, the scant dramatic tension and direct-to-video plot make this a slog. (Sept.) (c) Copyright PWxyz, LLC. All rights reserved

Perennial best-seller Shreve often uses a dramatic external event as a means of exploring how a single experience can dramatically alter the arc of one's entire life. Previously, she has limned the emotional fallout of an airplane crash, a house fire, and a murder; in her fourteenth novel, she uses a tragic mountain-climbing accident to explore the fragility of human connection. Within three months of moving to Kenya, 28-year-old Patrick informs his wife, Margaret, that they are set to join a climbing expedition to Mount Kenya. Since her husband is a doctor and the people slated to join them are so casual about the trip and its many details, Margaret is unprepared for the taxing conditions of the climb, which include scaling a glacier and a vertical bog. When one member of their party becomes disoriented, the trip ends in disaster. Patrick and Margaret, once happily married newlyweds, return from the expedition deeply changed. Between them is a devastating mistrust and a deadly silence. As they seek a way out of their impasse, Shreve deftly captures both exterior and interior landscapes, using sure, subtle prose to delineate the expansive Kenyan countryside and the claustrophobia of a bad marriage. Although not as riveting as her previous book, Testimony (2008), this one is sure to find a ready audience.--Wilkinson, Joanne Copyright 2009 Booklist

Shreve (Testimony, 2008, etc.) sends a young American couple up Mt. Kenya, with disastrous consequences for their marriage. Margaret and Patrick have been in Nairobi for three months. He came to pursue research in tropical diseases while offering his services as a doctor in free clinics; she was bored with her job at a Boston alternative weekly and hopes to find more interesting photography opportunities in Africa. Neither is an experienced climber, nor do they especially like their landlords, Arthur and Diana, who suggest the expedition. But they go along anyway, and it's athletic Diana who falls to her death. Is Margaret to blame because Diana was exasperated by her slowness and enraged by Arthur's attentions to the younger woman? Patrick thinks so and says so to his wife; their relationship is on shaky ground for the remainder of the story. It's not clear precisely what Shreve intends to convey in her tale. She unsparingly depicts the poverty and corruption of late-1970s Kenya and sends Margaret to work at a reforming newspaper whose editor is eventually arrested, but politics are not a central concern. Margaret, the point-of-view character, is a sensitive and thoughtful observer who can't seem to take hold of her life. Patrick will strike most readers as cold and judgmental from the start; it's hard to understand what Margaret ever saw in him, and her attraction to a reporter at the Kenya Morning Tribune isn't much more compelling. The second climb up Mt. Kenya, taken a year after the first, does not in the least meet Patrick's goal of expunging the "deadly silence" and "devastating mistrust" that have enveloped the couple, but it does restore Margaret's self-respect and make clear the state of their marriage. Commendably tough-minded and unsentimental, but not very engaging. Copyright Kirkus Reviews, used with permission.
More book reviews at iDreamBooks.com