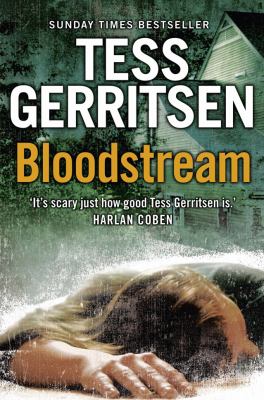 In April came the rains. In August came the heat. In November came the horror. It's paying a return visit. The small resort of Tranquillity, Maine, seems like the perfect spot for Dr Claire Elliot to shelter her adolescent son, Noah, from the temptations of the big city and the traumatic memory of his father's death. Claire's hopeful that she can earn the trust of the town as she builds a new practice. But all her plans unravel with the onset of winter, when an outbreak of teenage violence, far more deadly than anything she has encountered in the city, erupts in the local school. In trying to find a medical explanation for this murderous epidemic, Claire stumbles upon an insidious evil which has blighted the town's past and threatens its future. Terrified that Noah too is at risk, she must prove her theory before everything she loves is destroyed.

Paperback -In April came the rains. In August came the heat. In November came the horror. It's paying a return visit. Lapped by the gentle waters of Locust Lake, the small resort town of Tranquility, Maine, seems like the perfect spot for Dr Claire Elliot to shelter her adolescent son, Noah, from the temptations of the big city and the lingering memory of his father's death. And she's hopeful that she can earn the trust of the town as she builds a new practice. But all her plans unravel with the onset of winter when a rash of teenage violence, far more deadly than anything she'd encountered in the city, erupts in the local school. As she tries to find a medical explanation for this murderous epidemic, Claire stumbles upon an insidious evil which has blighted the town's past and threatens its future. Fearful that Noah, too, is at risk, she must race to prove her theory before everything she loves is destroyed.

Tranquility, Maine, seems like the perfect spot for Dr Claire Elliot to shelter her son from the temptations of the big city and the memory of his father's death. But with the onset of winter, teenage violence, far more deadly than anything she'd encountered in the city, erupts in the local school.

Gerritsen (Harvest, LJ 6/1/96) has hit another home run for the summer reading team. In her latest novel, widowed Dr. Claire Elliot takes her son Noah away from bad companions and potential trouble in Baltimore. She buys a practice in the summer resort of Tranquillity, ME, aiming for a new start. Unfortunately, mother and son land in a town straight out of a Stephen King novel. Every 50 years or so when the rains are heavy and summers hot, the community's teenage boys, come autumn, boil over with uncontrollable rage. Desperately hoping all the violent occurrences have medical causes, Elliot comes up with a variety of theories, all of which involve placing a quarantine on Locust Lake, the town's main source of income. The real cause of the terror is even more ominous and frightening than Elliot ever imagines. Buy multiple copies for the pool, beach, and picnic crowd. They won't be able to put this one down. [Previewed in Prepub Alert, LJ 4/15/98.]Dawn L. Anderson, North Richland Hills P.L., TX (c) Copyright 2010. Library Journals LLC, a wholly owned subsidiary of Media Source, Inc. No redistribution permitted.

Gerritsen leaves the urban hospital setting of her first two successful thrillers (Harvest; Life Support) and steps into Stephen King territorythe troubled Maine town of Tranquilitywith mixed results. The former doctor's ability to create credible characters and make medical details accessible and exciting provide the book's strongest moments, as Dr. Claire Elliotrecent widow from Baltimoretries to make a go of her new life in Tranquility, where she has moved to get her son Noah, 14, away from dangerous influences. Irony of ironies: the country turns out to hold more savage dangers for the teen than the city ever did. Claire's struggles with the boy, her failure so far to win a place for herself in the hearts of prospective patients and a possible romance with the town's police chief are straightforward and moving. Harder to swallow is the book's premisethat savage outbreaks of violence among Tranquility's teenagers occur every 50-odd years, caused by natural or even supernatural factors. It's Claire who makes the connection between recent murders and older attacks, and of course there's the old "enemy of the people" subplot about not scaring off the tourist trade. The fact that Tranquility's teenage problem has a scientific solution lets Dr. Elliot have a final moment of triumph, but you can't help feeling that King would have made the story more powerfuland more fun. Major ad/promo; author tour; Doubleday Book Club and Literary Guild super release; Mystery Guild main selection; simultaneous Simon & Schuster audio. (Aug.) (c) Copyright PWxyz, LLC. All rights reserved

YA-Tranquility, ME, sounds like the perfect place for Dr. Claire Elliot to relocate with her teenage son and help him deal with his father's death. However, as she begins her practice, so begins an epidemic of teen violence. The shooting of the school biology teacher and the violent ending to the big dance have Claire and the town police chief, Lincoln Kelly, searching hard for clues and answers. Are the blue mushrooms growing in the forest where local teens hang out the cause? Or is the mysterious green phosphorescence that appears on the lake where many of the young people swim the culprit? Claire's son suddenly and mysteriously becomes as wild and uncontrollable as his friends. This is a gory medical thriller that will keep YAs totally engaged.-Katherine Fitch, Lake Braddock Middle School, Burke, VA (c) Copyright 2010. Library Journals LLC, a wholly owned subsidiary of Media Source, Inc. No redistribution permitted.

Dr. Claire Elliot, newly come to Tranquility, Maine, and its hospital, stumbles into an epidemic of teen violence. Her son becomes involved, along with other young and, eventually, older citizens of the suspicious town. With the aid of police chief Lincoln Kelly, Elliot searches for a cause. Blue mushrooms in a teen-favored corner of the woods turn out to be a red herring. The green phosphorescence that occasionally appears on Lake Locust, in which many teens regularly swim, is, however, another matter. Despite misgivings, the high-school principal, who has long yearned for Chief Kelly, gives the go-ahead for the big dance. At it, violence threatens, of course, and Kelly almost talks a teenager into giving up a revolver. Just at the wrong moment, the number-two town cop and his crew burst onto the dance floor. Then Elliot and Kelly discover that earlier outbreaks of violence took place, like these, after a flood and a hot, dry summer. A drug company worker masquerading as a reporter, a sharp pathologist, and a cave of worms help bring Gerritsen's third fascinating, well-crafted, fast-paced medical thriller (the others were the best-selling Harvest [1996] and Life Support [BKL Je 1 & 15 97]) to a credible, creditable ending. --William Beatty

Third straight biological unpleasantry by redeployed internist Gerritsen (Support, 1997, etc.), who shuns no commercial device on the quest to suck in ever more readers. While fairly deft at characterization, Gerritsen shows even more smarts in chronicling high-energy ER work (she writes about more bodies than doctors) and ingeniously invents a new brain-altering parasite that has spread through the small resort town of Tranquility, Maine. Dr. Claire Elliot has moved with her adolescent son Noah to Tranquilitys Locust Lake after he failed to come to grips with his fathers death in Baltimore. As the replacement for the late Dr. Pomeroy, she has her problems being accepted by the locals. But these are nothing beside the plague of violence erupting among the town's young folk. Their mysterious rages bring on many deaths, including the shooting of Noah's biology teacher during class and such bloody events as all-nails-bared catfights among predatory girl students. Slowly, Dr. Elliot comes to believe in her theory of a parasite invading Locust Lake, where the kids swim. Of course, the townies, who have read their Ibsen (or Peter Benchleys Jaws), won't hear of thisthe bad news would demean Tranquilitys resort attractivenessand blame the messenger for her insights. Well, is the villain really a pork tapeworm whose eggs were blithely flushed into the lake? Did yet other eggs cause Tranquilitys none-too-tranquil murder rampages 50 and 100 years ago? Does the globby green bioluminescence that appears on Locust Lakeand even smears the violent kidspoint up the source of the mystery parasite? And what's this green glowing earthworm in Noah's sinus that's nearly killing him? Weirdly terrific stuff with a steel grip. Doc Gerritsen's mastery of the stupefying stupidity inherent in adolescent resistance to almost everything may well give the reader gray hairs. (Literary Guild selection; Mystery Guild main selection; author tour)
More book reviews at iDreamBooks.com