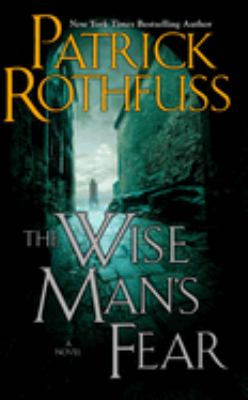 DDC classification: 813.6 Summary: Kvothe takes his first steps on the path of the hero as he attempts to uncover the truth about the mysterious Amyr, the Chandrian, and the death of his parents. Along the way, Kvothe is put on trial by the legendary Adem mercenaries, forced to reclaim the honor of the Edema Ruh, and travels into the Fae realm where he meets Felurian, the faerie woman no man can resist.
Tags from this library: No tags from this library for this title. Log in to add tags.
Fiction notes: Click to open in new window
Total holds: 0

Kvothe takes his first steps on the path of the hero as he attempts to uncover the truth about the mysterious Amyr, the Chandrian, and the death of his parents. Along the way, Kvothe is put on trial by the legendary Adem mercenaries, forced to reclaim the honor of the Edema Ruh, and travels into the Fae realm where he meets Felurian, the faerie woman no man can resist.

The bartender Kvothe continues telling his story to the Chronicler, relating his years as a student of magic at the University, the scandal that forced him to seek his fortune abroad, life in a strictly hierarchical society, a dalliance with a woman of the Fae, and his ongoing search for the mysterious Chandrian, who were responsible for his family's death. In this sequel to The Name of the Wind, mysteries deepen and the characters grow even more fascinating. VERDICT Reminiscent in scope of Robert Jordan's "Wheel of Time" series and similar in feel to the narrative tour de force of The Arabian Nights, this masterpiece of storytelling will appeal to lovers of fantasy on a grand scale. (c) Copyright 2011. Library Journals LLC, a wholly owned subsidiary of Media Source, Inc. No redistribution permitted.

As seamless and lyrical as a song from the lute-playing adventurer and arcanist Kvothe, this mesmerizing sequel to Rothfuss's 2007's debut, The Name of the Wind, is a towering work of fantasy. As Kvothe, now the unassuming keeper of the Waystone Inn, continues to share his astounding life story-a history that includes saving an influential lord from treachery, defeating a band of dangerous bandits, and surviving an encounter with a legendary Fae seductress-he also offers glimpses into his life's true pursuit: figuring out how to vanquish the mythical Chandrian, a group of seven godlike destroyers that brutally murdered his family and left him an orphan. But while Kvothe recalls the events of his past, his future is conspiring just outside the inn's doors. This breathtakingly epic story is heartrending in its intimacy and masterful in its narrative essence, and will leave fans waiting on tenterhooks for the final installment. (Mar.) (c) Copyright PWxyz, LLC. All rights reserved.

The wise man in the second volume of the Kingkiller Chronicle is Kvothe, and his fear is that being launched on a classic hero's quest may end his life before he can discover the killers of his parents, among other things. He has good reason for that fear. The notorious Adam mercenaries put him on trial, and their competence is matched only by their ruthlessness. Our hero wins free however, thanks to a combination of diplomacy, prowess in arms, and what can only be described as fast footwork. His escape route takes him into the land of the Fae and into the arms of the notorious Felurian. Vividly depicted, she is impossible to resist and impossible to escape or survive once a man succumbs to her. Rothfuss still offers somewhat more book than he has story, but the numerous high points substantially compensate for the sometimes slow pacing. Lovers of high fantasy, enjoy.--Green, Roland Copyright 2010 Booklist

A walloping sword-and-sorcery fest from Rothfuss, the second volume in a projected trilogy (The Name of the Wind,2007).Readers of that debutand if you weren't a reader of the first volume, then none of the second will make any sense to youwill remember that its protagonist, Kvothe (rhymes with "quoth"), was an orphan with magical powers and, as the years rolled by, the ability to pull music out of the air and write "songs that make the minstrels weep."The second volume finds him busily acquiring all kinds of knowledge to help his wizardly career along, for which reason he is in residence in a cool college burg, "barely more than a town, really,"that has other towns beat by a league in the arcane-knowledge department, to say nothing of cafs where you can talk elevated talk and drink "Veltish coffee and Vintish wine,"as good post-hobbits must. For one thing, the place has a direct line to a vast underground archive where pretty much everything that has ever been thought or imagined is catalogued; for another thing, anyone who is anyone in the world of eldritch studies comes by, which puts Kvothe in close proximity to the impossibly beautiful fairy Felurian, who makes hearts go flippity-flop and knows some pretty good tricks in the way of evading evil. Evil there is, and in abundance, but who cares if you're dating such a cool creature? Rothfuss works all the well-worn conventions of the genre, with a shadow cloak here and a stinging sword there and lots of wizardry throughout, blending a thoroughly prosaic prose style with the heft-of-tome ambitions of a William T. Vollmann. This is a great big book indeed, but not much happenswhich, to judge by the success of its predecessor, will faze readers not a whit.For latter-day DD fans, a long-awaited moment. For the restwell, maybe J.K. Rowling will write another book after all.]] Copyright Kirkus Reviews, used with permission.
More book reviews at iDreamBooks.com