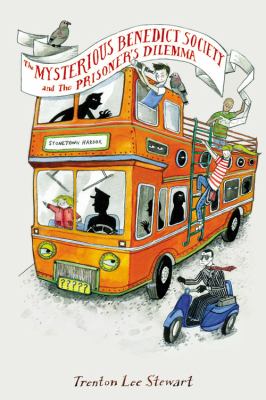 Genre/Form: Children's fiction.DDC classification: STE Summary: When an unexplained blackout engulfs Stonetown, Benedict Society members Reynie, Kate, Sticky, and Constance follow clues on an adventure that threatens to separate them from their families, friends, and even one another.
Tags from this library: No tags from this library for this title. Log in to add tags.
Fiction notes: Click to open in new window

Join the Mysterious Benedict Society as Reynie, Kate, Sticky, and Constance embark on a daring new adventure that threatens to force them apart from their families, friends, and even each other. When an unexplained blackout engulfs Stonetown, the foursome must unravel clues relating to a nefarious new plot, while their search for answers brings them closer to danger than ever before.

Filled with page-turning action and mind-bending brain teasers, this wildly inventive journey is sure to delight.

When an unexplained blackout engulfs Stonetown, Benedict Society members Reynie, Kate, Sticky, and Constance follow clues on an adventure that threatens to separate them from their families, friends, and even one another.

Sequel to: The mysterious Benedict Society and the perilous journey.

Gr 5-8-Reynie, Kate, Constance, and Sticky return for a third adventure. This time, the megalomaniac Ledroptha Curtain schemes to regain his deadly Whisperer machine. As Constance develops her powers of mental telepathy, Reynie and the others use their gifted minds to puzzle through Curtain's master plan even as they fall prey to his kidnapping attempt. Imprisoned by well-meaning and sinister characters alike, the Society members face choices that test their loyalty as well as their intellect. Sequels sometimes lack the intensity of the original works, and Prisoner's Dilemma struggles with this syndrome at times. The children's unique talents, long since revealed, are past the startling sparkle of their introduction. As character development yields to a dominant plot, the story lacks the facile agility of its predecessors. On the other hand, the opening gambit is fresh and frightfully funny, as is Constance Contraire always and forever. The writing is replete with rollicking metaphors. Finally, as in the best of E. L. Konigsburg's novels, Stewart's introspective characters examine the significance of their experiences. Unlike most adventurers, these special children see the world surrounding their story and share it with readers. If this is the last Society installment, readers had better, as Reynie says, "acquire a taste for the bittersweet."-Caitlin Augusta, Stratford Library Association, CT (c) Copyright 2010. Library Journals LLC, a wholly owned subsidiary of Media Source, Inc. No redistribution permitted.

The third (and perhaps final?) book about the Mysterious Benedict Society picks up with a brain teaser as Reynie, Constance, Kate, and Sticky try to figure out the conundrum known as the Prisoner's Dilemma. This artificial construct moves into real-life danger as Mr. Curtain et al. once again set their sights on the Whisperer. Questions about Constance and her past are answered here, and other loose ends are neatly tied as well. Displaying much of the charm of the first book, this would make a fitting end to the series, but the Society's legion of fans probably wouldn't say no to more.--Cooper, Ilene Copyright 2009 Booklist

(Intermediate, Middle School) The members of the Mysterious Benedict Society -- intuitive Reynie, athletic Kate, eidetic Sticky, and obstreperous four-year-old Constance Contraire -- are virtual prisoners in the house of their benefactor, Mr. Benedict. They've been sequestered to keep their nemesis, Ledroptha Curtain, from capturing and using them as hostages in his eagerness to regain control of the Whisperer, a brainwashing machine currently under the protective custody of Mr. Benedict. Their incarceration is enlivened by puzzles set for them by Mr. Benedict and the unusual powers of telepathy beginning to be evidenced by Constance, but when Mr. Curtain and the deadly Ten Men hijack the Whisperer and the children fall into a trap laid for them, they must bring all their puzzle-solving skills -- and Constance's telepathy -- to bear in their attempts to escape and neutralize the Whisperer. As in the previous series entries, the children's well-delineated characters are believable as those of young prodigies, the narrative puzzles mesh with thumping good action scenes, and the good-versus-evil plot balances the warmth of family connections with the excitement of deathly peril. From HORN BOOK, (c) Copyright 2010. The Horn Book, Inc., a wholly owned subsidiary of Media Source, Inc. No redistribution permitted.
More book reviews at iDreamBooks.com