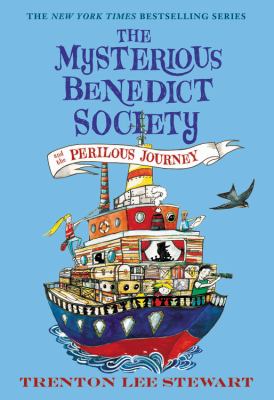 The Mysterious Benedict Society and the perilous journey / by Trenton Lee Stewart ; illustrations by Diana Sudyka.

| Treasure hunt (Game) -- Juvenile fictionDDC classification: STE Summary: Reynie, Kate, Sticky, and Constance, all graduates of the Learning Institute for the Very Enlightened and members of the Benedict Society, embark on a scavenger hunt that turns into a desperate search for the missing Mr. Benedict.
Tags from this library: No tags from this library for this title. Log in to add tags.
Fiction notes: Click to open in new window

The fearsome foursome is back in the second installment of the New York Times bestselling series praised by Rick Riordan!
The Mysterious Benedict Society is up against a new mission, significantly closer to home. After reuniting for a celebratory scavenger hunt, Reynie, Kate, Sticky, and Constance are forced to go on an unexpected search--a search to find Mr. Benedict. It seems that while he was preparing the kids' adventure, he stepped right into a trap orchestrated by his evil twin Mr. Curtain.

With only one week to find a captured Mr. Benedict, the gifted foursome faces their greatest challenge of all--a challenge that will reinforce the reasons they were brought together in the first place and will require them to fight for the very namesake that united them.

Includes excerpt to the sequel entitled The Mysterious Benedict Society and the prisoner's dilemma.

Reynie, Kate, Sticky, and Constance, all graduates of the Learning Institute for the Very Enlightened and members of the Benedict Society, embark on a scavenger hunt that turns into a desperate search for the missing Mr. Benedict.

Sequel to: The Mysterious Benedict Society.

Gr 5-7-What was supposed to have been a reunion with Mr. Benedict turns into trouble for the four young heroes of The Mysterious Benedict Society (Little, Brown, 2007). Mr. Benedict and his assistant Number 2 have been kidnapped by the evil Mr. Curtain while abroad, so Reynie, Kate, Sticky, and Constance set off to rescue him, aided by a set of clues Mr. Benedict left before his abduction. Adventure and danger await the four onboard an unusual ship, at a castle in Portugal, in the Netherlands, and finally on a mysterious island, where they fall into the hands of Mr. Curtain and his henchmen. It is a combination of courage and their amazing talents that allows the youngsters to squeak out of every predicament. The action takes a while to get going in earnest as more attention is given to the worries and thoughts of the children and to their interactions with the various helpful, eccentric, or nasty adults they meet in their travels. They also learn to understand themselves and one another a little better by the end of their harrowing journey. As a result, this is not just a rip-roaring adventure with plenty of clever twists and hair's-breadth escapes, but also a warm and satisfying tale about friendship.-Eva Mitnick, Los Angeles Public Library (c) Copyright 2010. Library Journals LLC, a wholly owned subsidiary of Media Source, Inc. No redistribution permitted.

The daring foursome from the well-received The Mysterious Benedict Society (2007) returns in a second perilous adventure. As the book opens, the children reunite at Mr. Benedict's home, where he has arranged a treasure hunt. Alas, they discover that Benedict and his assistant are being held captive somewhere, and dire consequences will result if Benedict's evil twin doesn't receive the information he desires in four days. The children undertake a worldwide journey to save Benedict and find the duskwort that will cure his narcolepsy. Lots of backstory is needed to set up this sequel, which makes for a choppy beginning. In the previous book, the protagonist's personal stories provided heft, but this is pure adventure lots of racing, scheming, fighting. Punches are pulled on the violence front, but the threat is always there, creating page-turning tension. It's this roller coaster, along with the essential goodness of the characters (except, perhaps, for Constance), that will draw kids to this breathless follow-up.--Cooper, Ilene Copyright 2008 Booklist

(Intermediate, Middle School) When their beloved leader and father-figure Mr. Benedict is kidnapped by his power-hungry twin Mr. Ledroptha Curtain, the four gifted members of the Mysterious Benedict Society discover that a playful puzzle-quest Mr. Benedict designed for them may hold the key to his rescue. As canny Reynie, athletic Kate, memory-whiz Sticky, and cantankerous toddler-prodigy Constance solve riddles, work codes, and follow clues on a speedy cargo-ship en route to Lisbon, Holland, and an uncharted Scottish island, their footsteps are dogged by Mr. Curtain's creepy henchmen, the Ten Men, so named for their signature briefcases that pack ten ways to hurt you with lethal office supplies. Save for a few treacly initial scenes with the children's overprotective caregivers, Stewart keeps interest high throughout the journey with first-rate brainteasers, interludes of physical danger, and the children's own complex dynamics, which reveal an understanding of the emotional needs of gifted youth. In particular, main protagonist Reynie, who has the greatest insight into human nature, struggles against cynicism when faced with the pervasive evil of Mr. Curtain's organization, a struggle felicitously addressed in the climax. Readers charmed by the first Mysterious Benedict Society's unexpected plot twists and quirky details will find this sequel a worthy successor. From HORN BOOK, (c) Copyright 2010. The Horn Book, Inc., a wholly owned subsidiary of Media Source, Inc. No redistribution permitted.

The seemingly ordinary young members of The Mysterious Benedict Society (2007) reunite for another grand adventure, though the author's mannered prose style, his habit of explaining things that need no explanation and his protagonist's compulsive need to ruminate over the ethics of every action may wear down less patient readers. When beloved sponsor and narcoleptic genius Nicholas Benedict goes missing, Reynie, Kate, Sticky and now-three-year-old Constance set out to the rescue. Fortunately, Benedict has left a trail of not-too-cryptic riddle/clues to follow. Unfortunately, his evil twin Ledroptha Curtain and minions are usually a step ahead. Also unfortunately--for the story, at least--the author trots in so many grown-ups to help the young folk along that in the end their own abilities only fitfully come into play. The rescue is ultimately accomplished, although as Curtain escapes, there may well be more outings for the Society down the road. Though still entertainingly quirky, this second doorstopper episode has more of an air of trading on the previous one's cleverness than building on it. (Fiction. 11-13) Copyright ©Kirkus Reviews, used with permission.
More book reviews at iDreamBooks.com