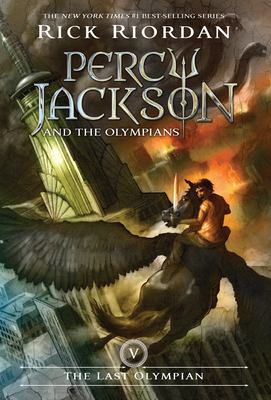 | Fantasy fiction -- JuvenileDDC classification: RIO Summary: While the Olympians struggle to contain the rampaging monster Typhon, Kronos begins his advance on New York City, where Mount Olympus stands virtually unguarded. Now it's up to Percy Jackson and an army of young demigods to stop the Lord of Time.
Tags from this library: No tags from this library for this title. Log in to add tags.
Fiction notes: Click to open in new window

From New York Times best-selling author, Rick Riordan, comes the momentous final book in the blockbuster Percy Jackson and the Olympians series.
All year the half-bloods have been preparing for battle against the Titans, knowing the odds of victory are grim. Kronos's army is stronger than ever, and with every god and half-blood he recruits, the evil Titan's power only grows. While the Olympians struggle to contain the rampaging monster Typhon, Kronos begins his advance on New York City, where Mount Olympus stands virtually unguarded. Now it's up to Percy Jackson and an army of young demigods to stop the Lord of Time.

In this momentous final book in the New York Times best-selling Percy Jackson and the Olympians series, the long-awaited prophecy surrounding Percy's sixteenth birthday unfolds. And as the battle for Western civilization rages on the streets of Manhattan, Percy faces a terrifying suspicion that he may be fighting against his own fate.

While the Olympians struggle to contain the rampaging monster Typhon, Kronos begins his advance on New York City, where Mount Olympus stands virtually unguarded. Now it's up to Percy Jackson and an army of young demigods to stop the Lord of Time.

Sequel to: The battle of the Labyrinth, final book in the Percy Jackson and the Olympians series.

Percy Jackson's fifth and final adventure begins with a blast and gets increasingly more explosive. It reads less like a novel than a 400-page battle scene set in Manhattan, pitting Percy, Annabeth, Grover & Co. against a pantheon of monsters intent on reaching the portal to Mount Olympus (located on the 600th floor of the Empire State Building). In other words: fans will not be disappointed. All the action takes place in the days before Percy's 16th birthday, on which a prophecy has foretold "a single choice shall end his days." Readers who have watched their dyslexic hero grow into his considerable powers since age 12 will not be surprised by his brave leadership. Or as Percy, facing the Minotaur's army, puts it in typically wry fashion: "It was now roughly one hundred and ninety-nine to one. I did the natural thing. I charged them." Details about Luke's childhood explain his traitorous allegiance to Kronos; Annabeth and Rachel Dare vie for Percy's attention; and the final clash would keep a Hollywood special effects team busy for years. As the capstone to this beloved series, this story satisfies. And a surprise character takes on the mantle of Oracle, instantly issuing a new prophecy that suggests, happily, there's more fun with the demigods to come. Ages 10-up. (May) (c) Copyright PWxyz, LLC. All rights reserved

Gr 5-9-The fates of all of the characters are decided, and the true meaning of the prophecy is revealed in this final book in the series. Crafting a finale that lives up to plot developments and expectations created by an ongoing series can be a somewhat daunting task, but Riordan has fashioned a suitably epic battle to wrap up his tale, which begins with a very literal bang as Percy and Charlie Beckendorf go on a mission to destroy Kronos's ship, the Princess Andromeda. Charlie sacrifices himself to ensure the mission's success, and Percy returns alone to Camp Half-Blood only to hear the prophecy involving the choice he will have to make on his 16th birthday in its depressing entirety. While there is a distinct feeling of sadness in leaving these characters, the ending also leaves an opening for stories about new half-blood kids in the future. While readers are sure to be satisfied by the way everything is resolved, there are a few too many deus ex machina rescues in the final battle. The book's message that the Greek gods will die unless we remember them might be a bit simplistic, but the fact is that the "Percy Jackson" books have done a great deal to revitalize interest in mythology. This book is a no-brainer purchase, since most libraries will already have the previous four titles in the series and will have readers anxiously awaiting its arrival.-Tim Wadham, St. Louis County Library, MO (c) Copyright 2010. Library Journals LLC, a wholly owned subsidiary of Media Source, Inc. No redistribution permitted.

*Starred Review* The week before his sixteenth birthday, a driver's license is the last thing on Percy's mind. After all, an impossibly huge and powerful giant is wreaking destruction across the Midwest as he strides toward New York City, which will soon be attacked by an army of Titans and assorted monsters bent on destroying Mount Olympus (secret access point: the Empire State Building). Percy and his demigod friends soon engage their enemies in an epic battle that will determine the fate of humanity as well as the gods. The novel's winning combination of high-voltage adventure and crackling wit is balanced with scenes in which human needs, fears, and ethical choices take center stage. Series fans will enjoy the reappearance of many characters from the previous books, while the references to their back stories will keep other readers on track. Riordan's imagination soars in the climactic battle scenes, which feature many Manhattan landmarks, yet he manages to bring the whole series to a satisfying close in the down-to-earth conclusion. Though this is the fifth and final volume of the enormously popular Percy Jackson and the Olympians series, the emergence of a new prophecy and the promise of new demigods hint that the adventures will continue.--Phelan, Carolyn Copyright 2009 Booklist

(Middle School) The battle between the Olympians and the Titan Kronos (inhabiting the body of the demigod Luke) comes to a head in this fifth (and final) installment of the Percy Jackson saga. Percy and the other demigod campers at Camp Half-Blood are running military raids on Kronos's monster forces, but Poseidon is under attack, a Titan disguised as a storm system is bearing down on Olympus in New York City, and Percy's sixteenth birthday, on which it is prophesied that he will make a fateful choice, is approaching. Faced with overwhelming odds, Percy follows Achilles's route, dipping himself in the Styx to achieve near-invulnerability, and becomes an unstoppable leader for the demigod defenders as the monsters attack New York. It is Percy's visions of Luke's past life and his friend Annabeth's involvement, however, that help him make his birthday choice. Once young and unsure, Percy and his friends have matured into battle-tested veterans with easy strength and a foxhole sense of humor, a summer-blockbuster sensibility that helps explain the popularity of the series. The companions who aided Percy through his adventures in the previous books are strong allies here, and Percy's romance with Annabeth, long in the cards, heats up at last. At book's end, Kronos is defeated and peace reigns -- but there are enough openings to believe the demigods will still be adventuring long after this popular series has drawn to its conclusion. From HORN BOOK, (c) Copyright 2010. The Horn Book, Inc., a wholly owned subsidiary of Media Source, Inc. No redistribution permitted.

In the fifth and final installment of the Percy Jackson and the Olympians series, Percy is turning 16, when it has been prophesied he'll make a choice affecting the fate of Western civilization. It takes 100 pages to set all of the players in place, but every detail proves essential to the playing out of the grand battle between the Titans and the Olympian gods. Morpheus has put New York City to sleep, preparing for the invasion of Kronos, Typhon and their army of monsters. Standing between them and their destination of Olympus, now at the top of the Empire State Building, are Percy, Annabeth, their demigod pals from Camp Half-Blood, the gods of Olympus and an assortment of other demigods and minor gods. Riordan masterfully orchestrates the huge cast of characters and manages a coherent, powerful tale at once exciting, philosophical and tear-jerking. The bestselling series's legions of fans will cheer their heroes on and rejoice in such a compelling conclusion to the saga. (Fiction. 9 up) Copyright Kirkus Reviews, used with permission.
More book reviews at iDreamBooks.com