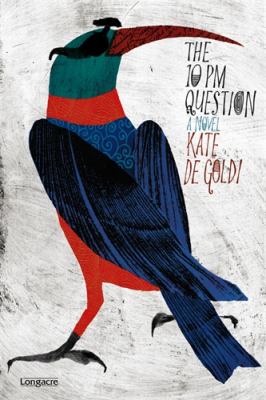 THE DUDE ABIDES...
AND YOU CAN TOO!

When you seek salvation from this stressed out, uptight world, there's only one man to go to for guidance; the Dude. At once helpful, funny and profound (like The Big Lebowski itself), this survival guide from the founders of the Church of the Latter-Day Dude and their top disciples shows how to be as Dude-like as the Dude (well, almost):

*Secrets of sacred Dudeist practices
*The Seven Spiritual Laws of Taking it Easy
*Great Dudes who changed the world (without really trying)
*New feminist philosophy for special ladies
*The Way of the Dude applied to politics, ethics and finances
*A 12-step program for personal dudevolution
*The science of really tying your room together

All this and a lot more what-have-you. So the next time life throws you a gutterball, just pick up this book and ask,; What Would the Dude Do?; It's your answer for everything.

Twelve-year-old Frankie Parsons has rather large, quirky family. Until now they've been the centre of his universe, but now Frankie's view of his world begins to change. There's a new arrival at school- a dredlocked girl called Sydney who becomes perplexingly fascinating to him. She even starts to draw him away from his best friend, Gigs. Suggested level: secondary.

Gr 6-8-Aside from being a nervous wreck and hypochondriac, 12-year-old Frankie thinks his life in New Zealand is pretty normal. He and his friend Gigs love cricket, swimming, and making up their own language. When a new girl enters his class, though, he begins to question everything. Sydney is a carefree soul who has been in 22 schools because her mother moves a lot. She is loud, doesn't care what others think of her, and is constantly asking questions. As he gets to know her, Frankie learns that Sydney's mother may be a prostitute who leaves Sydney oftentimes alone to care for her younger siblings. This infuriates him and also forces him to think about his own unusual home life, which includes his mother having not left the house in nine years. Although rather slow moving in the beginning, this is an interesting and thoughtful coming-of-age story. What starts as a Stargirl-like character coming between the friendship of two boys becomes a moving tale about the challenges of family life and being different. The book is highly descriptive and a great deal of it is made up of Frankie's memories, which establish his character and give readers insight into his life. They will not only feel his anxiety, but also understand where it comes from. Each chapter ends with nightly discussions between him and his mother, which are both telling and rather beautiful. Ultimately, he is able to come to terms with and appreciate his family and learn that life can be good, even if it's not perfect.-Kerry Roeder, The Brearley School, New York City (c) Copyright 2010. Library Journals LLC, a wholly owned subsidiary of Media Source, Inc. No redistribution permitted.

*Starred Review* Twelve-year-old Frankie dreams of having his best friend Gigs' worry-free disposition. But in his family, Frankie feels like he is the only one who bothers doing the thinking about everything from grocery lists to smoke-alarm batteries, and nothing seems to quiet his internal rodent voice . . . the perpetual bearer of unpalatable facts, once it gets rolling. Then irrepressible tomboy Sydney arrives at school and befriends Frankie almost against his will. Prompted by her brash charm, Frankie begins to follow Sydney's book of wacko etiquette and, for once, talk straight and tough about family mysteries, beginning with the most obvious and avoided question: Why does Ma never leave the house? An award-winning best-seller in New Zealand, where it was published in 2008, De Goldi's novel is an achingly poignant, wryly comic story of early adolescence that invites comparisons to works by authors as varied as Lynne Rae Perkins, Nick Hornby, and J. D. Salinger. Nearly every character, from Frankie's cheerfully sardonic teacher to the trio of pillowy, cigar-smoking aunties who give him sanctuary, is a loving, talented, unforgettable eccentric whose dialogue, much like De Goldi's richly phrased narration, combines heart-stopping tenderness with perfectly timed, deliciously zany humor. Readers from early teens through adults will be drawn to this beautifully nuanced, unsentimental view of family life, friendship, the heroic requirements of growing up, and the rewards of speaking the unspeakable out loud.--Engberg, Gillian Copyright 2010 Booklist

Twelve-year-old Frankie is the anxious youngest son in a quirky, loving, extended family whose rich culture of jokes, private language, and rituals cannot quite compensate for the elephant in the room: Frankie's mother's agoraphobia, a condition that is never named. A new friend, the bold and outspoken Sydney, a girl with her own family issues, opens Frankie up to the possibility of change and the delicate hint of romance. "Frankie felt extra alert when he was with her, as if he were passing through some rogue force field." This New Zealand import is a plum-pudding of a book -- witty, delightfully rambling, borderline grotesque in the Polly Horvath mode, iconoclastic (Sydney loves Frankie's great-aunts: "But they're so funny. And so fat. It must be so satisfying looking at them"; Great-aunt Alma says to Frankie at his lowest point: "It's times like these, you really need to be able to smoke...Smoking is such a good thought-gatherer"), and deeply moving in its portrait of an overly responsible child picking his way along the edge of adolescence. sarah ellis (c) Copyright 2010. The Horn Book, Inc., a wholly owned subsidiary of Media Source, Inc. No redistribution permitted.