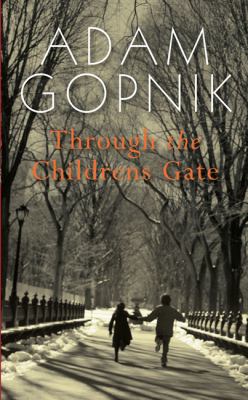 Through the children's gate : a home in New York / Adam Gopnik.

In 2000, Adam Gopnik, a prize-winning writer with the 'New Yorker', decided to move back to New York with his young family. This title chronicles their lives as well as the daily lives of others in the city.

Gopnik (The New Yorker) picks up where he left off in Paris to the Moon, with his family's move from Paris back to New York City in 2000. From touching and poignant stories of the post-9/11 city to the amusing anecdotes that arise from child rearing in this one-of-a-kind environment, Gopnik's accounts explore the wide array of life in the city. The reader can lament the decline of department stores and the changes in Times Square, hunt for the elusive perfect New York City apartment, treasure the unfolding of the city through the eyes of children, laugh at the absurdities of imaginary friends and the city's social scene, and explore the art and music that are part of the city's fabric. This collection of humorous and sentimental essays, which show modern New York City as both a home and a playground, comprises many previously published articles from The New Yorker but will be welcome as a collection by readers who enjoyed Paris to the Moon. Recommended for public libraries. [See Prepub Alert, LJ 6/1/06.] Sheila Kasperek, Mansfield Univ. Lib., PA (c) Copyright 2010. Library Journals LLC, a wholly owned subsidiary of Media Source, Inc. No redistribution permitted.

Back from living in Paris with his wife and two kids, as chronicled charmingly in Paris to the Moon, Gopnik, a writer for the New Yorker, records in his tidy, writerly and obsessive fashion his family's relocation to the city of his earliest professional aspiration: New York. No longer the grim, decrepit hell of the 1970s, New York of the new century has become a children's city, infused by a "new paternal feeling," and doting father Gopnik is delighted to walk through the Children's Gate of Central Park to relive the romance of childhood. His 20 various essays meander over topics dear to the hearts of New York parents, such as learning to be appropriately Jewish ("A Purim Story"); working with the ad hoc committee called Artists and Anglers at his son's hypercaring private school, on methods of flight for the production of Peter Pan; and his four-year-old daughter's imaginary playmate, Charlie Ravioli, who is simply too booked to play with her. The less structured series of essays on Thanksgiving are most pleasing and read like diaries, ranging from the rage over noise to the safety of riding buses. Gopnik conveys in his mannered, occasionally gilded prose that New York still represents a kind of childlike hope "for something big to happen." 150,000 copy first printing. (Oct.) (c) Copyright PWxyz, LLC. All rights reserved

Gopnik's previous book, the best-selling Paris to the Moon (2000), drew its material in large part from his Paris Journal column appearing in the New Yorker. That book shared his and his family's experiences living in the City of Light for five years. In 2000 he and they moved back to New York, and in his new collection of essays, he demonstrates anew how, despite tackling two of the world's greatest and oft-written-about cities, he has staked out his own mastery of the literature of place. As Gopnik ranges over contemporary life in the Big Apple, bringing into his purview and commentary such specific topics as raising children in that vastly busy environment and indulging in one of the city's favorite preoccupations (namely, consulting a psychotherapist), he lets there be no mistake that these pieces are literate, serious in his analysis of social issues (even though he can be funny at the same time), deeply thought out and well reasoned, and arise from not only an immaculate writerly talent but also a sharp ability to understand why people, in particular places, do peculiar things. --Brad Hooper Copyright 2006 Booklist
More book reviews at iDreamBooks.com