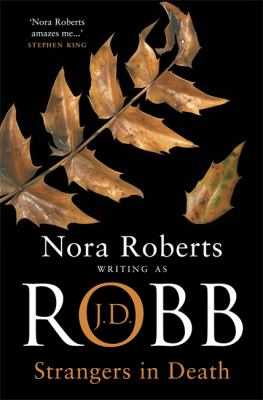 DDC classification: ROB Summary: The death of a prominent businessman in 2060 New York prompts Lieutenant Eve Dallas to seek assistance from her billionaire husband, an investigation that proves complicated when clues suggest that the killer had been known by the victim's family.
Tags from this library: No tags from this library for this title. Log in to add tags.
Fiction notes: Click to open in new window
Total holds: 0

Technology may be different in 2060 New York, yet the city is still a place of many cultures and great divides. But as ever, some murders receive more attention than others - especially those in which the victim is a prominent businessman, found in his Park Avenue apartment, tied to the bed - and strangled - with cords of black velvet.It doesn't surprise Lieutenant Eve Dallas that Thomas Anders' scandalous death is a source of titillation and speculation to the public - and of humiliation to his family. But while all those in the city are talking about it, people close to Anders aren't so anxious to do the same. With some help from her billionaire husband, Roarke, Eve is soon knocking on doors- or barging through them - to find answers.But the facts don't add up. Physical evidence suggests that the victim didn't struggle. The security breach in the apartment indicates that the killer was someone connected to the family, but everyone's alibi checks out. Was this a kinky sex game that turned into a crime of passion - or a meticulously planned execution? It's up to Dallas to solve a case in which strangers may be connected in unexpected, and deadly, ways.

The death of a prominent businessman in 2060 New York prompts Lieutenant Eve Dallas to seek assistance from her billionaire husband, an investigation that proves complicated when clues suggest that the killer had been known by the victim's family.

A businessman is elegantly murdered in his Park Avenue apartment, and Lt. Eve Dallas is puzzled: there was no security breach, and everyone he knows has an alibi. (c) Copyright 2010. Library Journals LLC, a wholly owned subsidiary of Media Source, Inc. No redistribution permitted.

In bestseller Robb's slick 26th not-so-near-future crime thriller to feature Lt. Eve Dallas (after 2007's Creation in Death), the New York City homicide cop investigates the murder of business tycoon Thomas Anders, whose strangled body is discovered tied to his bed, apparently the victim of a kinky sex encounter gone bad. Aided by her mysterious husband, Roarke, and long-time sidekick Det. Delia Peabody, Eve doggedly questions Anders's widow, Ava, and his nephew, Benedict Forrest, number two at the victim's corporation, Anders Worldwide. Both Ava and Benedict have alibis that put them far from the crime scene at the time of Anders's death. While the guilty party soon becomes obvious and the gimmick used by the culprit clear to anyone familiar with Strangers on a Train, Robb's strong, hard-nosed heroine once again generates the kind of heat that keeps fans turning the pages. (Feb.) (c) Copyright PWxyz, LLC. All rights reserved
More book reviews at iDreamBooks.com