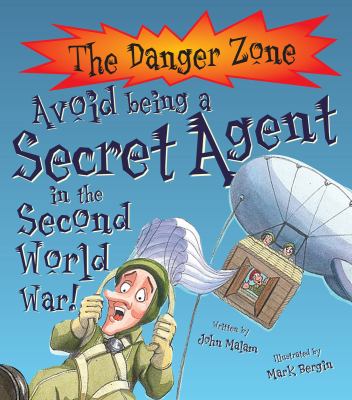 Avoid being a secret agent in the Second World War! / written by John Malam ; illustrated by Mark Bergin ; created and designed by David Salariya.

As a French refugee in the Second World War, you find hope in the Special Operations Executive in Britain. Your task? In the words of Winston Churchill, you must 'set Europe ablaze' by disrupting the Germans as much as possible. You must learn to fight, survive and possibly endure torture in your work as a secret agent. But with an arsenal of gadgets such as explosive rats and noiseless guns, you know your presence in this war will definitely be felt, if not necessarily seen. The Danger Zone is a constantly-growing library of over 50 exciting titles which transport the reader to the grisliest times and places in history. The first-person narrative approach puts the reader in the shoes (or sandals or army boots or cloth sacks) of some of the most unfortunate people ever to have lived - from pyramid builders to viking explorers, from medieval knights to the crew of the Titanic. This approach encourages readers to get emotionally involved with the story and characters, aiding their understanding of some of the most important periods in history. Humourous cartoon-style illustrations and speech bubbles bring the characters to life, while informative captions explain processes or chronological events. Each spread comes complete with a Handy Hint box, offering a clever tip on how to survive whatever ghastly situation you've found yourself in. A complete glossary and index featured in every title makes The Danger Zone an ideal introduction to the conventions of non-fiction texts for young readers.