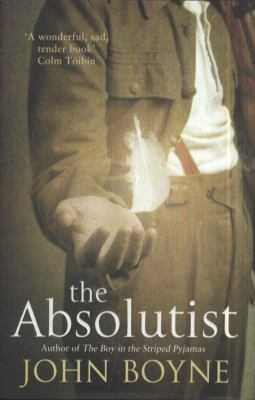 September, 1919. 20-year-old Tristan Sadler takes a train from London to Norwich to deliver some letters to Marian Bancroft. Tristan fought alongside Marian's brother Will during the Great War but in 1917, Will laid down his guns on the battlefield, declared himself a conscientious objector and was shot as a traitor.

It's September 1919: 20 year-old Tristan Sadler takes a train from London to Norwich to deliver some letters to Marian Bancroft. Tristan fought alongside Marian's brother Will during the Great War but in 1917, Will laid down his guns on the battlefield, declared himself a conscientious objector and was shot as a traitor, an act which has brought shame and dishonour on the Bancroft family. But the letters are not the real reason for Tristan's visit. He holds a secret deep in his soul. One that he is desperate to unburden himself of to Marian, if he can only find the courage. As they stroll through the streets of a city still coming to terms with the end of the war, he recalls his friendship with Will, from the training ground at Aldershot to the trenches of Northern France, and speaks of how the intensity of their friendship brought him from brief moments of happiness and self-discovery to long periods of despair and pain. The Absolutist is a novel that examines the events of the Great War from the perspective of two young privates, both struggling with the complexity of their emotions and the confusion of their friendship.

A novel that examines the events of the Great War from the perspective of two young soldiers, both struggling with the complexity of their emotions and the confusion of their friendship.

This award-winning Irish author (The Boy in Striped Pyjamas) has written a most English book. In 1919, young Tristan Sadler, a recovering veteran of World War I, travels by train to Norwich to return some letters to the sister of regiment mate Will Bancroft, who was killed in combat. Readers looking forward- to refined conversation over tea as the two lament his death are in for an uncomfortable shock, as alternating lengthy chapters descend into the hell of a war not well remembered now: the mud, lice, and rats in the subterranean trenches, to say nothing of the carnage in meaningless battles. Tristan struggles with huge secrets. One is his homosexuality, which, in early 20th-century fashion, is not named outright. The other is Will's ultimate fate, brought about as the understaffed British troops arguably go mad under the pressures of war. VERDICT A thought-provoking and surprising page-turner that for some readers may recall Ian McEwan's Atonement, another novel with themes of war and recrimination.-Reba Leiding-, James Madison Univ. Libs., Harrisonburg, VA (c) Copyright 2012. Library Journals LLC, a wholly owned subsidiary of Media Source, Inc. No redistribution permitted.

Boyne's new novel documents the lives of two inseparable men navigating the trenches of WWI and the ramifications of a taboo involvement. The emotive wartime saga is narrated by Tristan Sadler, a soldier en route to visit his dead comrade Will Bancroft's older sister Marian in Norwich, England, a few years after serving in the Great War. The story oscillates between Sadler's trip in 1919 to return Will's letters to Marian, and recollections of wartime, including a forbidden and fleeting homosexual affair with Bancroft, depicted by Boyne with the same polite, properly delicate prose that permeates the book. Bancroft is the self-declared "absolutist" of the title, objecting not only to fighting, but to doing anything at all that would "further the war effort." Sadler's feelings for Bancroft bring him shame amid the horrors of battle, eventually making an absolutist of Sadler as well. When the young Sadler confides the details of his time with Bancroft to Marian, she rejects him, a reaction echoed 60 years later, by which time Sadler has come into his own as a literary sensation. Once again he braves Marian's disapproval, inciting a final heartbreak. A relentlessly tragic yet beautifully crafted novel from Boyne (The Boy in the Striped Pajamas). Agent: Bonnie Nadell, Hill Nadell Literary Agency. (July) (c) Copyright PWxyz, LLC. All rights reserved.

A novel set in the trenches of World War I, one of several by Irish author Boyne (The Boy in the Striped Pajamas, 2006, etc.) staged amid the 20th century's worst moments. As the story opens, Tristan Sadler, who has just turned 21, is in the countryside north of London, looking to deliver a packet of letters from a wartime friend, Will Bancroft, to Will's sister. Sadler is at once shattered and defiant: He has survived the horrors of the Western Front, one of just two boys--and boys most of them were--in his basic training unit to make it out alive. As for the rest: Well, Boyne honors convention by giving each soldier a turn in the spotlight, sometimes briefly, sometimes for symbolic purposes. One is killed off fairly early on in the proceedings, but not before he has had the chance to trouble the unit with doubts about just what this war among royal cousins is all about. In time, the seditious spirit will spread to Will, who, for complex and subtle reasons, has decided to become an "absolutist"--that is, to have absolutely no part in the war effort, not even as a stretcher bearer. That's the kind of thing that can get a fellow in trouble in the king's army--and so, too, the forbidden love that Will and Tristan share. If Will is an absolutist, then Tristan is a situationist; when Will asks him whether he has any principles, he replies, "No. ... People, perhaps. But not principles. What good are they?" Some of the key moments of the book--notably an encounter with a frightened German soldier--are very effective. ]] Copyright Kirkus Reviews, used with permission.
More book reviews at iDreamBooks.com