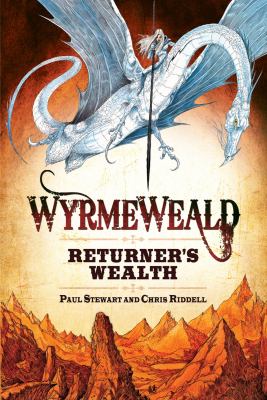 From the creators of the internationally bestselling Edge Chronicles comes an epic story of dragons
The wyrmeweald is a hostile place, an arid wasteland where man is both hunter and hunted, and where the dragon-like wyrmes reign supreme. Seventeen-year-old Micah enters the wyrmeweald intent on stealing a wyrme egg to sell for a bounty. With the riches such an egg will bring--returner's wealth--Micah can go home to a life of luxury, and win the hand of the girl he loves. But the wyrmeweald is a treacherous place, and Micah quickly finds himself in mortal danger. When a tracker named Eli rescues him, Micah is forced to prove his worth, and together he and Eli defend a rare wyrme hatchling from kith bandits intent on stealing and selling wyrme eggs. As Micah soon discovers, this hatchling has a guardian already--the beautiful, brave, and dangerous Thrace. Micah and Thrace make the worst possible match: Micah is a would-be bandit, and Thrace is a wyrme rider-assassin, devoted protector of the wyrmeweald. Yet their chemistry is undeniable, and soon Micah and Thrace join forces to protect the rare wyrme and battle the evil forces that encroach on their native habitat. But is there anything left in the devastated wyrmeweald to be saved?

Stewart and Riddell (the Edge Chronicles) launch the Wyrmeweald trilogy with this intriguing take on dragons, set in a fantasy world where so-called wyrmes have value, but hunting them is a deadly proposition. Seventeen-year-old Micah ventures into the wyrmeweald, determined to bring back enough wealth to set himself up as a lord and woo the noblewoman he loves. Instead, he forms a tentative partnership with Eli Halfwinter, a hermit who shows him how to survive in the wilderness, and (later) Thrace, an enigmatic and dangerous young woman who has bonded with a mighty whitewyrme. Romance and adventure go hand in hand as the members of this fragile team overcome their differences to protect the wyrmeweald against those who would despoil it. Originally published in the U.K., the story is fast-paced, full of gorgeous imagery and haunting moments, and enhanced by thin vertical panels of intricate art that bring the scenes and creatures to life. It's a fresh angle on an old favorite, with plenty of crossover appeal. Books two and three, Bloodhoney and The Bone Trail, are available simultaneously in paperback and digital formats. Ages: 13-up. (Sept.) (c) Copyright PWxyz, LLC. All rights reserved.

Gr 9 Up-The creators of "The Edge Chronicles" (Random) introduce an exciting new world full of dinosaurlike creatures called wyrmes. Wyrmeweald is a harsh and unforgiving place, particularly to those who travel there seeking their fortune through gemstones, wyrme ivory, or anything else of value that can be carried out. Micah, a poor 17-year-old from the plains, travels to the rocky high country in search of his own "returner's wealth." While he is hunting for a wyve (a wyrme egg), he is gravely injured by its protector, the beautiful but deadly Thrace. As wyrmekin, she is powerfully bonded with the great whitewyrm Aseel, whom she rides and fights alongside as wyrmes are cruelly hunted and harvested for their parts. Fortunately, Micah is found by Eli, a tough inhabitant of the region who becomes his travel partner and mentor. The young men follow a murderous band only to find a wounded and unconscious Thrace. As the group joins together set on revenge, Micah and Thrace are drawn to each other emotionally and physically despite their differences. Vivid details, highly descriptive short chapters told from a variety of interesting characters, and black-and-white sketches sprinkled throughout help bring to life a thorough picture of the brutality and desolateness of Wyrmeweald. The first book in what's sure to be a popular trilogy ends with the humans securing their winter den as the cruel fullwinter is approaching. Violence and adult themes make Returner's Wealth most appropriate for mature readers.-Sherry J. Mills, Hazelwood East High School, St. Louis, MO (c) Copyright 2013. Library Journals LLC, a wholly owned subsidiary of Media Source, Inc. No redistribution permitted.

Lovelorn teen Micah leaves his plains home to find his fortune in the wyrmeweald the dangerous mountainous home of the dragonlike wyrmes only to find himself caught up in a quest for vengeance with an experienced, socially conscious treasure hunter and the human female soul mate of a great white wyrme. The creators of the popular Edge Chronicles introduce a new adventure series for a high-school audience, centered on three people who have recently experienced loss: Micah, recovering from his first love; Eli, whose love interest is murdered; and Thrace, whose connection to the great white wyrme Aseel weakens when she and Micah discover their mutual attraction. The authors' world building is thorough and evocative of the Wild West, augmented by Riddell's pen-and-ink illustrations, which adorn chapter openings as well as a minigallery of wyrmes at the end of the book. Romance is included, but the focus is on rugged action, with open-ended plot points hinting at the future development of other characters and situations.--Welch, Cindy Copyright 2010 Booklist

A young wanderer enters the Wyrmeweald--a mountainous land of sudden death, untold riches, and dragons, dragons, dragons--in this grim trilogy opener. Having encountered three corpses on the trail and receiving a near-fatal wound himself, Micah falls in with Eli, a gruff mountaineer who fills him in on the increasingly vicious struggle between outside exploiters, or "wyrmekith," and the "wyrmekin" who have learned to live closely with the indigenous dragons. Joined by Thrace, a lovely if feral dragon-rider, the protagonists pursue a gang of murderous egg thieves, tangle bloodily with a community of "gutsmen" and encounter a cannibal wyrmekin. The authors give all of the kith cast members Old Testament names and use ornate language ("Already, sharp-eyed, keen-nosed carrionwyrmes with cropscythe claws and teeth like hackdaggers were circling overhead"), presumably for atmosphere. They also positively festoon their setting and tale with dragons of many sorts and sizes: lakewyrmes, fire-breathing whitewyrmes, mistwyrmes, fisherwyrmes, tatterwyrmes, stormwyrmes, lanternwyrmes, squabwyrmes and more. A few rate full-page portraits at the end; narrow strip illustrations at the chapter heads offer smaller, partial views of figures, creatures and landscapes. Red meat for rabid dragon lovers, but younger fans of the authors' Edge Chronicles may be discomfited by the gruesome bits and steamy clinches. (Fantasy. 12-16)]] Copyright Kirkus Reviews, used with permission.
More book reviews at iDreamBooks.com