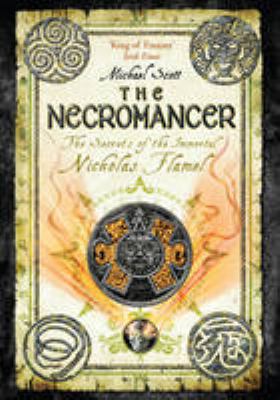 | London (England) -- Juvenile fiction | England -- FictionGenre/Form: Fantasy fiction. | Young adult fiction. | Fantasy fiction -- Juvenile fiction. | Teen fiction.DDC classification: 823.92 Summary: After fleeing to Ojai, then Paris, and escaping to London, Josh and Sophie Newman are finally home. And after everything they've seen and learned in the past week, they're both more confused than ever about their future.Summary: 13 yrs+
Tags from this library: No tags from this library for this title. Log in to add tags.
Fiction notes: Click to open in new window

In the fourth book in the New York Times bestselling Secrets of the Immortal Nicholas Flamel series, Sophie and Josh are about to enter a war with John Dee and his menagerie of monsters.

After fleeing to Ojai, then Paris, and escaping to London, Josh and Sophie Newman are finally home. And after everything they've seen and learned in the past week, they're both more confused than ever about their future.

Gr 7-10-In the fourth book (Delacorte, 2010) of Michael Scott's fantasy series, twins Josh and Sophie Newman are asked to exercise some of their newly awakened magical skills to help stop the nefarious Dr. John Dee from loosing the evil creatures housed on Alcatraz on the city of San Francisco. While the story is fabulous, weaving in characters from history, mythology, and fantasy (Joan of Arc, NiccolU Machiavelli, William Shakespeare, Billy the Kid, etc.), it doesn't really stand alone. The world that Scott has created is tightly woven and extremely complex. The story's action takes place over just a couple of days, but it manages to span countries, times, and dimensions. Paul Boehmer does a brilliant job of performing an overwhelming number of characters, giving each one a distinct voice. An excellent addition for libraries circulating the first three titles. Fans will not be disappointed.-Genevieve Gallagher. Charlottesville High School, VA (c) Copyright 2010. Library Journals LLC, a wholly owned subsidiary of Media Source, Inc. No redistribution permitted.

In this continuation of noted mythologist Scott's Nicholas Flamel series, Awakened twins Sophie and Josh join a quickly aging Nicholas and Perenelle in a fight to save the world from menacing creatures housed on Alcatraz. Fantastical parallel story lines include characters drawn from history and the literary canon, including Prometheus, Billy the Kid, William Shakespeare, the Witch of Endor, Machiavelli, and Virginia Dare. Less-familiar mythological characters and creatures will send readers to the Internet as they try to keep up with the exciting action. The surprising, disturbing ending reassures readers that Nicholas Flamel will return.--Bradburn, Frances Copyright 2010 Booklist

Josh and Sophie finally return home, having gained some mastery over their recently awakened magical powers. Meanwhile, Nicholas must try to gain back the twins' trust. Though the plot continues to drive its characters, the story line following the twins is engaging and the blending of historical people and mythology continues to be an entertaining signature of this series. Copyright 2010 of The Horn Book, Inc. All rights reserved.
More book reviews at iDreamBooks.com