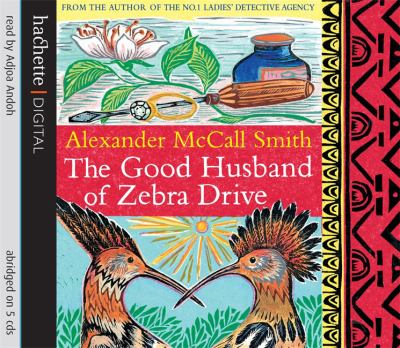 Precious Ramotswe is experiencing staffing difficulties. Her relationship with her assistant is strained. But the work of the agency must continue. Mr J.L.B. Matekoni becomes involved in the agency's work when he investigates an errant husband. But can a man investigate such matters as competently as one of the ladies?

"From the author of The No.1 Ladies' Detective Agency"--container.

The "something special" that Mama Ramotswe's husband planned for their adopted daughter hits a snag in the eighth of the popular series. Twelve-city tour. (c) Copyright 2010. Library Journals LLC, a wholly owned subsidiary of Media Source, Inc. No redistribution permitted.

Smith once again combines a loving depiction of ordinary life in modern Botswana with memorable characters and an engaging mystery in the eighth installment in his beloved No. 1 Ladies Detective series (after Blue Shoes and Happiness). Dr. Cronje, who's half Xhosa and half Afrikaner, consults Smith's sleuth, the gentle and insightful Precious Ramotswe, because patients at his hospital who have occupied a particular bed have been dying mysteriously at the same time of day. Meanwhile, Mma Ramotswe's recently engaged assistant, Grace Makutsi, threatens to break their longstanding association. Mma Ramotswe must adjust their relationship in order to retain Mma Makutsi's services. The author's subtlety of touch and humane portrayal of figures at all levels of society will continue to win him new readers even as his deepening of the ties binding the main figures will satisfy those who have followed the lady detectives from their first recorded case. (Apr.)(c) Copyright PWxyz, LLC. All rights reserved

Scotsman McCall Smith's best-selling novels featuring traditionally built Botswana sleuth Precious Ramotswe continue to resonate with poignancy, wisdom, and wit. Fans of the series will appreciate the deeper characterizations in this eighth entry, particularly that of Mma Ramotswe's bespectacled assistant, Mma Makutsi, whose professional priorities seem to shift after her engagement to a wealthy man. McCall Smith (whose vast opus includes the Isabel Dalhousie, 44 Scotland Street, and Portuguese Irregular Verb series) serves up a compelling mystery, too, involving a series of patients who have died at the same time of the week in the same hospital bed. This time around, Mma Ramotswe's devoted husband (and first-class mechanic) J. L. B. Matekoni also tries his hand at the detective business, catering to a rude client who suspects her husband of infidelity. The case prompts Mr. Matekoni to wonder whether he's exciting enough for his cherished wife. Of course, no matter what dramas the day brings, Mma Ramotswe always has time to enjoy a cup of red bush tea and revel in the beauty of her native land. Peace and prosperity prevail in Botswana, where McCall Smith, who was born in Zimbabwe, spent time as a professor of law. The No. 1 Ladies' Detective Agency series is his love letter to a country whose salubrious climate is matched by the warmth and humanity of its people. --Allison Block Copyright 2007 Booklist

Everyone's a detective in this eighth peek into the files of Botswana's No. 1 Ladies' Detective Agency (Blue Shoes and Happiness, 2006, etc.). Mma Precious Ramotswe's distant cousin Tati Monyena, who's almost (but not quite) an administrator at the Dutch Reformed Mission Hospital in Mochudi, wants her to look into the thorny question of why three patients should suddenly die on the same black Friday. Although Mma Ramotswe tells him that the Agency doesn't usually get involved in such cases--"we may be detectives, but not that sort"--she agrees to question the hospital staff, only to find a disconcerting lack of evidence that there's been any foul play. Meanwhile, Mma Ramotswe's husband, Mr. J.L.B. Matekoni, the proprietor of Tlokweng Road Speedy Motors, has inadvertently intercepted a case--the suspected adultery of bossy Faith Botumile's accountant husband--he promptly claims as his own, brandishing some deductions worthy of Sherlock Holmes in support of his status. And Mma Grace Makutsi, the assistant who's shaken Mma Ramotswe by quitting the Agency for an entire afternoon, is rewarded on her return by her own investigation: chronic pilferage from Mma Teenie Magama's Good Impression Printing Company. Only Mma Ramotswe's case ends up amounting to anything. But the outpouring of mercy it provokes casts a welcome new light on Smith's beloved Botswana, where everyone is honest and polite, except for the ones who aren't. Copyright ©Kirkus Reviews, used with permission.
More book reviews at iDreamBooks.com