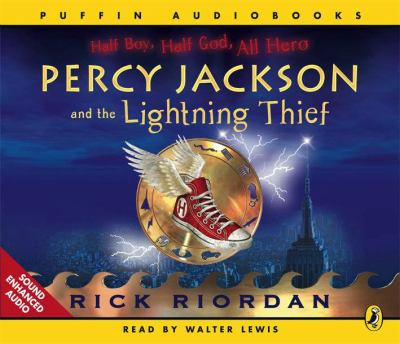 The gods of Olympus are alive in the 21st century. They still fall in love with mortals and have children who might become great heroes, but most of these children meet horrible fates at the hands of monsters by the age of 12. Only a few learn the truth of their identity and make it to Half Blood Hill.

After learning that he is the son of a mortal woman and Poseidon, god of the sea, twelve-year-old Percy is sent to a summer camp for demigods like himself, and joins his new friends on a quest to prevent a war between the gods.

Venditti's adaptation of the critically acclaimed first installment of the Percy Jackson & the Olympians series faces a daunting challenge: to present a beloved, contemporary, young adult fantasy novel as a 128-page visual narrative. But the team succeeds in spectacular fashion. Venditti (The Surrogates) takes the story of the half-blood Percy-who discovers that he is both the son of a god and the prime suspect in a theft of cosmic implications-and forges an adaptation that does justice not simply to Riordan's story but works perfectly as a graphic novel. The book retains the excellent pacing of the original and gives a face to Riordan's vision of the mythological made modern. Futaki's artwork is exemplary, but what leaves such a lasting impression is Villarrubia's coloring, which reveals both subtlety and spectacle when needed. The graphic novel compression must, of necessity, sacrifice something, namely some of the humor of the original. Ages 10-up. (Oct.) (c) Copyright PWxyz, LLC. All rights reserved.

Gr 4 Up-Riordan's highly popular "Olympians" series (Hyperion/Disney) is now a graphic novel. Half-Blood Percy Jackson is the son of a mortal mother and the Greek god Poseidon, which explains why he has always felt out of place among his schoolmates. After learning of his paternity, he is charged with the dangerous mission of locating his Uncle Zeus's missing lightning bolt and returning this symbol of power to its rightful owner. Expert editing keeps the salient parts of the story intact while showcasing the additional storytelling capabilities that the graphic format allows. Excellent panel layout makes the story line easy to follow. The use of angled panels in highly dramatic action scenes is particularly effective. As readers follow Percy's adventures, they are also keenly aware of his personal struggles, as facial expressions help readers to relate to this boy "who doesn't fit in." Illustrations brilliantly illuminate the story, portraying seamless world-blending, from typical school drama and well-known U.S. landmarks to mythological elements. A man seated in one panel casually stands to reveal his true identity as a centaur, the eerie woman seated in the attic is an Oracle, and the Nereid of the undersea kingdom seems a natural part of Percy's world. This blend of mythology and magic with realistic action and adventure brings an added dimension and delightful nuances to this adaptation of the well-known novel. Both ardent followers of Riordan's books and those new to the series will not be disappointed.-Barbara M. Moon, Suffolk Cooperative Library System, Bellport, NY (c) Copyright 2011. Library Journals LLC, a wholly owned subsidiary of Media Source, Inc. No redistribution permitted.

How could it have taken five years to see a graphic-novel adaptation of such a successful property as the Percy Jackson and the Olympians series, and one that, with its heroic destinies and epic action, seems tailor-made to the format? Riordan's original, like Harry Potter as if reimagined by Neil Gaiman, hits all the straightforward archetypes, with young Percy Jackson clued into the secret that he's actually the son of Greek god Poseidon, then educated at Camp Half-Blood with the other illegitimate demigods before embarking on a hero's journey to stop a war of the Olympians. But Riordan also injected a sense of thorny reality with twists like Percy's good-for-nothing stepfather and the entrance to Hades residing in a soulless Los Angeles. Where the slick and flashy movie version failed, Venditti's sharp-edged writing and Futaki's gritty and unprecious art capture the same sense of grunge amid the wonder. A timely release that can be recommended with George O'Connor's recent Olympians graphic novels, proving that while five years may seem too long, at least the wait was worth it.--Karp, Jesse Copyright 2010 Booklist

(Intermediate, Middle School) Percy Jackson, living with ADHD and expelled from many a private school, finds meaning behind his difficulties at last -- he's really a half-blood offspring of Poseidon. His nerves are wired for hero-monster combat, not for sitting in a classroom; his dyslexic eyes are attuned to ancient Greek instead of English. His Latin teacher is the centaur Chiron in disguise, and Furies are out for his blood. After a dramatic midnight flight, Percy finds sanctuary at Half-Blood Hill, a summer camp on eastern Long Island for children of the gods, but it isn't long before he's sent on a quest to retrieve Zeus's thunderbolt from Hades (located, naturally, in L.A.). Accompanied by Annabeth, half-blood daughter of Athena, and Grover, his satyr friend and protector, Percy soon discovers some funny business about who really has the bolt. Packed with humorous allusions to Greek mythology and clever updates of the old stories, along with rip-snorting action sequences, the book really shines in the depiction of Percy -- wry, impatient, academically hopeless, with the sort of cut-to-the-chase bluntness one would wish for in a hero of old. Will Percy's next adventure be welcomed by readers? (c) Copyright 2010. The Horn Book, Inc., a wholly owned subsidiary of Media Source, Inc. No redistribution permitted. All rights reserved.

Edgar Award-winning Riordan leaves the adult world of mystery to begin a fantasy series for younger readers. Twelve-year-old Percy (full name, Perseus) Jackson has attended six schools in six years. Officially diagnosed with ADHD, his lack of self-control gets him in trouble again and again. What if it isn't his fault? What if all the outrageous incidents that get him kicked out of school are the result of his being a "half-blood," the product of a relationship between a human and a Greek god? Could it be true that his math teacher Mrs. Dodds transformed into a shriveled hag with bat wings, a Fury, and was trying to kill him? Did he really vanquish her with a pen that turned into a sword? One need not be an expert in Greek mythology to enjoy Percy's journey to retrieve Zeus's master bolt from the Underworld, but those who are familiar with the deities and demi-gods will have many an ah-ha moment.Along the way, Percy and his cohort run into Medusa, Cerberus and Pan, among others. The sardonic tone of the narrator's voice lends a refreshing air of realism to this riotously paced quest tale of heroism that questions the realities of our world, family, friendship and loyalty. (Fantasy. 12-15) Copyright ©Kirkus Reviews, used with permission.
More book reviews at iDreamBooks.com