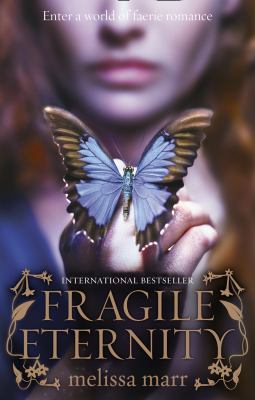 The clash of ancient rules and modern expectations swirl together in this cool, urban 21st century faery tale.

Sequel to: Wicked lovely. -Aislinn and Seth struggle with the unforeseen consequences of Aislinn's transformation from mortal girl to faery queen as the world teeters on the brink of cataclysmic violence.

[Seth never expected he would want to settle down with anyone - but that was before Aislinn. She is everything he'd ever dreamed of, and he wants to be with her forever. Forever takes on new meaning, though, when your girlfriend is an immortal faery queen. Aislinn never expected to rule the very creatures who'd always terrified her - but that was before Keenan. He stole her mortality to make her a monarch, and now she faces challenges and enticements beyond any she'd ever imagined]

Aislinn and Seth struggle with the unforeseen consequences of Aislinn's transformation from mortal girl to faery queen as the world teeters on the brink of cataclysmic violence.

Gr 9 Up-Fans of the fey world will devour this sequel to Wicked Lovely (HarperTeen, 2007). The groundwork laid in that book makes navigating the world of the Summer Queen, Winter Queen, and Dark Court easier, although determined readers could make it through this book alone. Marr has created a world both harsh and lush, at once urban and natural, with decaying buildings covered with blooming vines, unkempt Victorian mansions, an overgrown park for the Summer Court, with living Rowan people, gazing ravens, and a mysterious fountain. This world exists within the mortal world and yet remains invisible to most. Aislinn moves uneasily between high school life (although she rarely seems to attend class or study) and her "job" as Summer Queen, a role that increasingly pervades every aspect of her life and draws her deeper into Faerie. Chasteness is not a particularly valued faery trait, and descriptions of interactions, while not explicit, have a mature sensuality and desire. Keenan, Seth, and "Ash" are respectful of boundaries, although the longing to be physically close is never far from the surface, and is sometimes acted upon. Tattoos, body piercing, pool halls, and smoking are portrayed as glamorous parts of teen life. Wicked Lovely, Fragile Eternity, and their companion, Ink Exchange (HarperTeen, 2008), would be good suggestions for fans of Maggie Stiefvater's Lament: The Faerie Queen's Deception (Flux, 2008).-Maggie Knapp, Trinity Valley School, Fort Worth, TX (c) Copyright 2010. Library Journals LLC, a wholly owned subsidiary of Media Source, Inc. No redistribution permitted.

In this sequel to Wicked Lovely (2007),Marr shifts the focus back to Aislinn, now the Summer Queen, and her mortal lover, Seth. With summer approaching, Aislinn finds herself increasingly attracted to Keenan, the Summer King. Yet Aislinn clings to her love for Seth, refusing to release her connection to the mortal world. A paragon of patience, Seth knows that Aislinn's immortality will eventually separate them, and he pursues a dangerous remedy as tensions within Faerie increase and allegiances shift. Slim on plot and heavy with Aislinn's inner conflict, this will nevertheless be popular with fans of the series.--Rutan, Lynn Copyright 2009 Booklist

Three months after the events of Wicked Lovely (2007), Aislinn and her boyfriend, Seth, are still trying to figure out the complex world of Faerie. Though Aislinn, as the Summer Queen, has an antagonistic relationship with the Winter Queen, Donia, Donia's frigidity is the least of Aislinn's problems. Elsewhere in the city, two sisters representing Order and Chaos predict war for Faerie. The overwrought, repetitive writing (one character "quirks his brow" at no fewer than three points in the book) that is Marr's trademark does not let up for a moment here. In spite of this, the plots of multiple love triangles and impending war manage to move much more smoothly from scene to scene than in Wicked Lovely or the companion Ink Exchange (2008). Romantics will be touched by Seth's undying, if blind, devotion to the ever-more-untouchable Aislinn; he goes so far as to become a faery himself in order to be with her forever. Like its predecessors, this book is a few hundred pages of mediocrity underneath an exquisite cover, and it will fly off library and bookstore shelves. (Fantasy. YA) Copyright Kirkus Reviews, used with permission.
More book reviews at iDreamBooks.com