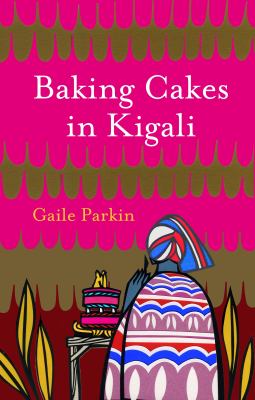 | Tanzanians -- Rawanda -- Fiction | Rwanda -- Social life and customs -- FictionGenre/Form: Domestic fiction. | General fiction.DDC classification: 823.92 Summary: Meet Angel Tungaraza - Kigali's very favourite cake baker. Angel bakes cakes for every occasion, giving comfort and good advice to her friends and neighbours; but she also hides a painful secret. Can she finally admit the truth about her children?
Tags from this library: No tags from this library for this title. Log in to add tags.

This is a novel in 14 irresistible confections, and behind each cake lies a story. As Angel helps her customers to work through their problems, they, in turn, help her to lay to rest the demons she has buried deep inside until, finally, she is able to face the truth and to achieve a sense of peace.

Meet Angel Tungaraza - Kigali's very favourite cake baker. Angel bakes cakes for every occasion, giving comfort and good advice to her friends and neighbours; but she also hides a painful secret. Can she finally admit the truth about her children?

Angel Tungaraza runs a cake business from her apartment in the multicultural Rwandan city of Kigali. She drives a hard bargain for her beautiful cakes, but the advice she gives her varied clientele over tea is on the house. As a Tanzanian, Angel is easier for Rwandans to confide in-she is a fellow African yet does not share their terrible past. Angel is a businesswoman and wife, neighbor and confessor, matchmaker and righter of wrongs, and grandmother and mother to her five grandchildren since the deaths of her son and daughter. Fans of Alexander McCall Smith's "No. 1 Ladies' Detective Agency" series will enjoy the setting and this engaging main character, though readers who look for in-depth character development will be somewhat disappointed that we don't get to know some of Angel's customers and neighbors more fully. Parkin's first novel is not without moral complexity, yet it is ultimately a story of hope and recovery for a country torn apart by genocide and AIDS. Verdict Recommended for all glass-half-full readers with an interest in Africa. [See Prepub Alert, LJ 5/1/09.]-Gwen Vredevoogd, Marymount Univ. Lib., Arlington, VA (c) Copyright 2010. Library Journals LLC, a wholly owned subsidiary of Media Source, Inc. No redistribution permitted.

Set in an international apartment complex in Rwanda, Parkin's appealing but overstuffed debut throws together university professors, U.N. employees and CIA agents among a panoply of traditions and cultures. Heroine Angel Tungararza has moved from Tanzania with her husband, Pius, who's taken a job at the local university; before long, she develops a reputation as a masterful baker and a sagacious friend. Though haunted by the deaths of her grown daughter and son, Angel plunges back into motherhood, caring for her five grandchildren, tending to Pius, baking cakes and dispensing advice. Meanwhile, the sour undercurrents of AIDS and genocide play quiet but instrumental parts in shaping Angel's world. In Parkin's eagerness to introduce a rainbow of cultures and personalities, she crowds her enjoyable but terminally dedicated heroine, forcing Angel to take a saccharine supporting role in her own story; almost simultaneously, she's soothing survivors of Rwandan genocide, reconciling a local prostitute and her client, and serving as an honorary mother-of-the-bride. (Sept.) (c) Copyright PWxyz, LLC. All rights reserved

Adult/High School-Grieving over the murder of their son and the murky details of their daughter's death, Angel, an inspired and popular baker, and Pius, a university professor, leave Tanzania with their five grandchildren for Rwanda. Angel is commissioned to bake cakes for every occasion, and her interest in the story of the celebrant and the client as well as the nature of the celebration expands her role to confidante, therapist, financial adviser, and matchmaker. She is privy to the most intimate stories, some as horrific as those of victims of the 1994 genocide, others as mundane as unrequited love. Upon hearing the stories, Angel is compelled to help with more than cake making. Most touching and symbolic is her role as surrogate mother in a wedding of truth and reconciliation between a Hutu and a Tutsi. The descriptions of Angel's thought processes are as eloquent as they are simple. Charming images of spicy sweet tea and mouthwatering cakes and humorous explanations such as how to deceive a dishonest tailor are juxtaposed with heartbreaking accounts of child hobos living in Dumpsters. This is a good choice for readers interested in the political and social life of African countries and fans of Alexander McCall Smith's "The No. 1 Ladies' Detective Agency" series (Pantheon).-Jackie Gropman, formerly at Fairfax County Public Library System, Fairfax, VA (c) Copyright 2010. Library Journals LLC, a wholly owned subsidiary of Media Source, Inc. No redistribution permitted.

In a land where human tragedy is wrought in epic proportions due to AIDS, famine, and genocide, one woman has a gift for fighting hardship one cake at a time. An emigrant to the Rwandan city of Kigali, the sublimely named Angel Tungaraza creates luscious gourmet cakes for neighbors and friends, diplomats and villagers who have learned the value of celebrating life's joys. A menopausal matron, Angel has lost both her adult children to disease and its violent adjuncts, and is now raising her five grandchildren. Such personal experience with her country's catastrophes makes Angel the ideal confidante, a skill she puts to charming and clever use as she empathetically elicits each customer's history with the subtle skill of a trained counselor. Client by client, cake by cake, Angel whips up the perfect blend of honor and hope, reflection and thanksgiving. A native of Zambia and consultant on AIDS and gender education, debut novelist Parkin delivers a buoyant, astute, and sensitively pragmatic portrait of contemporary African challenges.--Haggas, Carol Copyright 2009 Booklist

Colorful debut novel surrounds a cake-baking protagonist with a multinational cast of supporting characters. Angel and her husband Pius tragically buried both of their grown children, son Joseph and daughter Vinas. Now the Tanzania-born couple are raising five grandchildren (two girls and three boys) in Rwanda's capital city. Angel does her part to keep the family afloat by selling her cakes, which she decorates with bright colors and fanciful designs. Her skill has brought her a wide array of customers, including an ambassador and her neighbor Ken, a Japanese American who works for the United Nations. Ken is one of many foreigners who live in the same complex as Angel and Pius. Their lives intersect over polite cups of sweet, milky tea and conversations conducted in several languages, covering subjects that range from prostitution to HIV. The chapters, each one a little story unto itself, collectively develop the ongoing saga of Angel and her family. All the action takes place against a backdrop of social change, as African women in particular struggle to improve their lives and obtain educations. Angel functions as confidante to many; she's a woman of immense compassion as well as a baker of extraordinary talent. This likable and interesting character, unfortunately, is not well served by cumbersome prose and glacial pacing. Parkin inserts back story by having characters repeat things they already know, a device that works once or twice but is ultimately annoying as well as contrived. In her dialogue, people constantly repeat each others' names, something that rarely happens in real life. Born and raised in Zambia, Parkin offers a fascinating personal glimpse into a culture unfamiliar to most Americans, but better editing could have transformed her slightly stilted effort into a book to remember. Copyright Kirkus Reviews, used with permission.
More book reviews at iDreamBooks.com