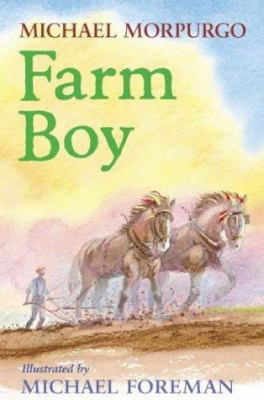 Set on a farm in rural Devon, Farm Boy is a collection of Grandpa's reminiscences and stories touchingly told to his grandson. Superbly told by a master storyteller and stunningly illustrated by Michael Foreman - an exquisite book.

Joey was the last working horse on the farm, and the apple of Grandpa's eye. In War Horse, published twelve years ago, Joey was sent away from the farm to be a warhorse in WWI. Grandpa had joined the cavalry in order to find, and fight, with Joey. Farm Boy brings us forward fifty years with Grandpa not only telling his grandson, Joey's story but also a 'shameful secret' which he has held for years - Grandpa has never learned to read and write.

The story is set in Iddesleigh in Devon and lovingly evokes the bonds between farm and farmer; grandson and grandfather. The spirit of rural life is superbly captured in both Michael Morpurgo's writing and Michael Foreman's illustrations. An irresistible title from acclaimed author-illustrator partnership. The title was first published in full colour by Pavilion.

First published in the U.K. in 1997, this novella, billed as a sequel to Morpurgo's War Horse, reads more like a tender epilogue. Albert, who joined the British Army during WWI at age 14 intent on finding his requisitioned horse, Joey, has long since died. Even his son is an old man now, still living on the family farm in Devon. During a summer with his (unnamed) grandson, he tells stories about his father, Albert, the war hero; their fine draft horses, Joey and Zoey; and, most importantly, how all the days spent helping with the harvest instead of going to school left him illiterate. The grandson then becomes teacher to the man, and is rewarded with a final story, written in his grandfather's unpunctuated, regional English (no grammar, phonetic spellings). Foreman's hazy watercolor-and-pencil illustrations depict rural and wartime scenes, evoking the early 20th century with period posters and advertisements. While this well-crafted story lacks the grand drama of War Horse, it offers a satisfying glimpse into a bygone era, while delivering quiet messages about the value of hard work, family, and the tragedies of war. Ages 8-12. (Apr.) © Copyright PWxyz, LLC. All rights reserved.

Gr 5-8-In a rambling story, the narrator relates family memories spanning four generations on an English farm. Beginning with the hours he spent as a child atop Grandpa's old disabled Fordson tractor, he remembers: "I'd be ploughing or tilling or mowing, anything I wanted. It didn't matter to me that the engine didn't work...." Later, Grandpa tells him the story of how he came to own the tractor, a tale involving a beloved horse and a braggart, rich neighbor who was foolish enough to make a bet pitting the horse against the modern farm machine. Morpurgo's storytelling style is unhurried, reflecting great skill at giving unique voices to his characters. Episodes are loosely strung together in classic fireside style. At one point, Grandpa tells his own story in a letter to the narrator. The memories of his workhorse are particularly poignant, and readers will learn many details about life during the early part of this century and World War I. The book is generously illustrated with Foreman's soft watercolor-and-pencil illustrations and period posters, flyers, and advertisements. While some children will genuinely appreciate the style and content of this well-designed book, its appeal will be mostly to adults.-Lee Bock, Glenbrook Elementary School, Pulaski, WI (c) Copyright 2010. Library Journals LLC, a wholly owned subsidiary of Media Source, Inc. No redistribution permitted.

Morpurgo's award-winning War Horse (2007) is an action-packed, heartrending story of a young farm boy, Albert, with his beloved horse, Joey, in the trenches in WWI. In this companion novel, Albert's son tells his own grandson another dramatic story of struggle, not on the war front but in the farm fields at home. First, Grandpa shares his lifelong secret: he cannot read. Then, while they work together, and Grandpa teaches the boy farm skills and shares stories from the past, the boy teaches Grandpa his letters. Finally, Grandpa writes a story about a battle he won at home with his neighbors long ago in a plowing match between horses and the new modern tractor. With black-and-white illustrations in watercolor and pencil on every page, the first-person narratives tell of the rich bonds across generations, the warmth of farm life, and the power of words.--Rochman, Hazel Copyright 2010 Booklist

The vocabulary, subject matter, and format of this stand-alone sequel target a younger audience than that of War Horse, but the memoir-within-a-memoir structure may challenge those readers. The narrator visits his beloved grandfather on the family farm. Grandpa tells stories, including one related by his father, who went to war to find his horse, Joey. Black-and-white illustrations gently portray the agrarian setting of this affecting paean to farming and family. (c) Copyright 2012. The Horn Book, Inc., a wholly owned subsidiary of Media Source, Inc. No redistribution permitted.

A lad gives his grandfather a great gift, and receives one in return in this small gem from two of Britain's foremost children's book talents. Though town-raised, something draws the narrator to his grandfather's Devon farm; there he plays on the broken-down old tractor, or just visits, listening again to Grandpa's tale of how Great-Grandpa followed a beloved plow horse into the army, then brought it home at the end of the WWI. When the old man reluctantly confesses that he's allowed his ability to read and write slip away, he and his grandson embark on four months of steady remedial practice, at the end of which there's a new story about Great-Grandpa as a parting gift. Foreman focuses on the flashbacks, depicting rural and wartime scenes with faded colors'as though seen through a veil'creating a sense of the past that is enhanced by the occasional old poster or advertisement. Although the grandfather and the narrator, who has grown into young manhood by the end, appear only occasionally, their warm mutual regard for one another comes through clearly, anchoring this expertly crafted reminder that stories can link generations. (Fiction. 9-11)
More book reviews at iDreamBooks.com