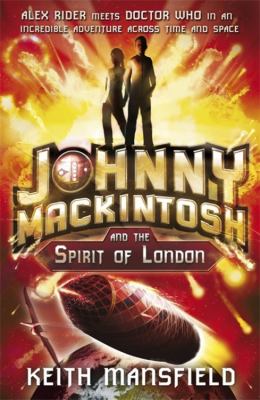 Johnny Mackintosh and the Spirit of London / Keith Mansfield.

When thirteen-year-old Johnny's talking computer Kovac detects an extraterrestrial signal, his life is set to change for ever. Until then, stuck in his children's home in Castle Dudbury New Town, with the nasty cook Mr Wilkins watching his every move, football had been his only escape.
But soon things start happening around him that Johnny doesn't understand: why is his mother, who is on life support in a hospital for the criminally insane, being guarded by sinister looking men? And why was a journalist murdered shortly after Johnny talked to him? When Johnny finds out he has a sister, he decides to run away to find her.
His search for answers takes him farther from home than he could ever have imagined, on a spectacular journey through time and space. Along the way he visits new worlds, prehistoric Earth and the lost city of Atlantis before finally discovering the truth about his parents and who he really is.