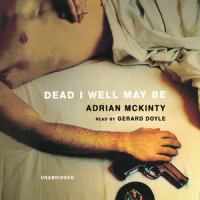 DDC classification: 813/.54 Read by Gerard Doyle.Summary: Michael Forsythe, an illegal immigrant escaping the troubles in Belfast, Northern Ireland, is tapped by Darkey, a crime boss, to join a gang of Irish thugs struggling against the rising Dominican powers in Harlem and the Bronx.
Fiction notes: Click to open in new window
Total holds: 0

<p>This Irish bad-boy thriller, set in the hardest streets of New York City, introduces us to Michael Forsythe, an illegal immigrant escaping from the Troubles in Belfast, Northern Ireland. Clever, fearless, and handy with a pistol, young Michael is just the fellow to be tapped by Darkey, a New York crime boss, to join his gang of thugs fighting for their turf. But just as Michael is being anointed Darkey's rising star, he inadvisably seduces Darkey's girl. Suddenly the tables are turned, and Darkey plans a very hard fall for young Michael. But Darkey fails to account for Michael's toughness--or his determination to wreak vengeance upon those who betray him.</p> <p>A natural storyteller with a gift for dialogue, McKinty delivers us a stunning new noir voice, dark and stylish, mythic and violent--complete with an Irish lilt.</p>

Michael Forsythe, an illegal immigrant escaping the troubles in Belfast, Northern Ireland, is tapped by Darkey, a crime boss, to join a gang of Irish thugs struggling against the rising Dominican powers in Harlem and the Bronx.

McKinty's second novel is a brutal tale of revenge starring a young illegal immigrant from Ireland who chooses a criminal career in New York over unemployment in Belfast. Arriving in the city in the early 1990s, the antihero Michael Forsythe lands a spot as an enforcer for Irish mobster Darkey White. Though Forsythe at first keeps his hands relatively clean, he soon racks up a significant number of kills in skirmishes with rival crews as well as with Dominican gangs warring for control of the streets. An affair with his boss's girlfriend leads to a setup: he and his mates are trapped in a drug sting in Mexico and abandoned in a remote prison. "If someone grows up in the civil war of Belfast in the seventies and eighties, perhaps violence is his only form of meaningful expression," McKinty writes early in the novel, and the bulk of the story recounts Forsythe's grisly efforts to escape and avenge himself, including a stint with a Dominican group seeking to oust Darkey White. The pace is brisk and energetic, but Forsythe remains a cipher-a self-educated intellectual who listens to Tolstoy on tape during a stakeout but exhibits puzzlingly little interest in finding an alternative to the gun and the knife. The dark, brooding tone is reminiscent of Dennis Lehane, but McKinty has yet to achieve Lehane's depth and complexity. (Oct.) (c) Copyright PWxyz, LLC. All rights reserved

Michael Forsythe, another mick who can't get no satisfaction, leaves depressed Northern Ireland for New York City at 19, set to work construction for an Irish mobster until he earns back plane fare. Instead, he's assigned to the shady side of the business as low-rent muscle. It's 1992, a dangerous time in Harlem, with Dominican gangs testing Irish turf. It's even dicier for Michael, a book-smart dreamer who's fallen for the boss' girl. Standard stuff, yes, but explosive in McKinty's expert hands. A literate, funny, wise old soul in the body of a dangerously naive teen, his Michael draws us close and relates a fantastic tale of murder and revenge in low, wry tones, as if from the next barstool. He's doing the voices as he goes--no quotation marks necessary, mate--and keeps dropping big, bloody hints about future twists. The dark revelations only get listeners leaning in closer, desperate to hear what happens next even while longing for the story to go on forever. As Michael and his crew muddle through horrifying mishaps--maiming the wrong guy here, getting lost in a Mexican prison there--he drops out of conversational mode to throw in a few breathtaking fever-dream sequences for flavor. And then he springs an ending so right and satisfying it leaves us numb with delight and ready to pop for another round. Start the cliche machine: This is a profoundly satisfying book from a major new talent--and one of the best crime fiction debuts of the year. --Frank Sennett Copyright 2003 Booklist

A breakout second novel (after Orange Rhymes with Everything, 1997) careens boisterously from Belfast to the Bronx, and 'tis naught but Troubles all the way. Michael Forsythe's on the run, everlastingly it seems. He's 19, psyche-scarred, battle-scarred, Belfast-scarred, so that violence has become "his only form of meaningful expression." To avoid jail, he slips out of the O.C. (Old Country) and into the States, illegally, and almost at once finds his talents in demand: he's good with his fists, his guns, icy in a tight spot, and noticeably cleverer than most. It's 1992, crack is king, and an ambitious Irish gangster named Darkey White wants his turf free of the Dominican influence. Michael's made to order for him--until, that is, the advent of Bridget. Bridget is beautiful, reckless, and, to Michael, fatefully irresistible: "Aye, you can imagine her . . . summoning you to a barrow in the earth. You would know all this and still you would bloody follow her." And Michael does--to his cost, because she belongs to Darkey, who, while unreservedly pleased at Michael's performance on his behalf, has zero tolerance for hanky-panky. Michael and three young colleagues are dispatched to Mexico, on a routine drug deal to be followed by some well-earned downtime, they're told. But it's a betrayal. Instead, they're peached on to the Mexican police and, as a result, imprisoned--in a very bad prison, chillingly evoked, bad enough so that only Michael survives. Eventually, he escapes, taking with him the heaviness of a promise made to a friend: an eye for an eye, invoked on a dying breath. How Michael goes about the business of revenge, and how it reshapes him, is the burden of the rest of the tale. McKinty, born in Northern Ireland and now Colorado-based, is a storyteller with the kind of style and panache that blur the line between genre and mainstream. Top-drawer. Copyright ©Kirkus Reviews, used with permission.