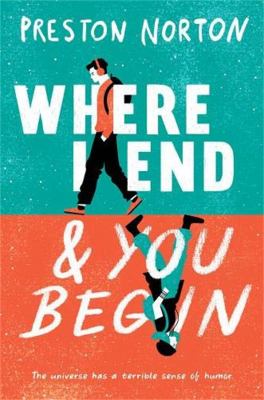 Where I end & you begin / Preston Norton.

DDC classification: [Fic] Summary: As punishment for breaking into their high school to watch the solar eclipse, Ezra, his crush Imogen, Ezra's best friend Holden, and Imogen's best friend Wynonna must perform in the school's production of Shakespeare's Twelfth Night, but before the first rehearsal starts, socially inept Ezra and badass Wynonna wake up in each other's bodies.
Tags from this library: No tags from this library for this title. Log in to add tags.
Total holds: 0

Ezra is an anxious insomniac with a huge crush on Imogen. Unfortunately, her best friend Wynonna has made a career out of tormenting him. After a solar eclipse, Wynonna and Ezra wake up - body-swapped! They then begin randomly swapping back and forth every day. Ezra soon discovers Wynonna's crush on his best friend Holden and proposes that he helps her win his heart while they body-swap, on the condition she helps him woo Imogen in return. Wildly entertaining and deeply heartfelt, Where I End and You Begin is a brilliant, unapologetic exploration of what it means to be your best self.

As punishment for breaking into their high school to watch the solar eclipse, Ezra, his crush Imogen, Ezra's best friend Holden, and Imogen's best friend Wynonna must perform in the school's production of Shakespeare's Twelfth Night, but before the first rehearsal starts, socially inept Ezra and badass Wynonna wake up in each other's bodies.

Norton (Neanderthal Opens the Door to the Universe) incorporates Freaky Friday-style body switching in this novel to explore the inner conflicts of two enemies crushing on each other's best friends. On the night of a total eclipse in Carbondale, Ill., socially anxious Ezra intends to ask longtime crush Imogen to prom. Instead, he finds himself trapped inside the body of Imogen's best friend, bold, brassy Wynonna, whose "favorite hobby" is making his life a "living hell." Much to Ezra's relief, the switch is only temporary, but then it keeps happening, and for longer periods of time. While in the girl's skin, Ezra learns of Wynonna's interest in his best friend, Holden, and seeks to soothe her estranged relationship with her father and guardian grandmother. In turn, Wynonna helps bridge the gap between Ezra and his younger sister, who has distanced herself since learning of their parents' extramarital affairs. The frequent, rather abrupt body switches and cluttered plot, which includes a production of Twelfth Night that parallels the teens' experience, prove more distracting than effective. Still, Norton's novel offers thought-provoking ideas about gender, sexuality, and compassion with plenty of comedy along the way. Ages 14-up. Agent: Jenny Bent, the Bent Agency. (June) © Copyright PWxyz, LLC. All rights reserved.

Preston (Neanderthal Opens the Door to the Universe, 2018) has poured his heart and soul into this latest contemporary novel, which is inspired by Shakespeare's Twelfth Night (and other mistaken-identity classics). When high-school junior Ezra and his best friend, Holden, run into Ezra's longtime crush, Imogen, and her best friend, Wynonna, breaking into school the night of the solar eclipse, the truly unthinkable happens: Ezra and Wynonna swap bodies. After Ezra accidentally discovers Wynonna's burning crush on Holden, he and Wynonna form a tenuous pact to help each other woo their respective crushes. Through their body-swapping, Ezra and Wynonna uncover each other's secrets and learn that there was something about caring for someone genuinely caring for them that made you forget yourself. That made you realize you were part of something bigger. That you were important. That you were loved. This is an intricate and gorgeously plotted novel that blurs the lines between gender and sexuality, and absolutely oozes with empathy and compassion.--Caitlin Kling Copyright 2019 Booklist

Ezra Slevin and Wynonna Jones are sworn enemiesuntil they start swapping bodies and realize that they have more in common than they thought.Ezra has been in love with Imogen Klutz since the fourth grade, and after years of pining for her, he decides to ask her to junior prom. There are, however, two problems: the first is Ezra's social anxiety and the second is Wynonna, Imogen's best friend, who bullies him relentlessly. On the day of the solar eclipse, Ezra's best friend finally convinces him to ask Imogen out. But his world turns upside down when, in the middle of a scuffle, he swaps bodies with Wynonna and then switches back to himself. The incident kicks of a pattern of the two constantly flipping between each other's worlds. As they begin to uncover each other's secrets, Ezra and Wynonna realize all they shareand that, chillingly, the switch might end up being permanent. Ezra's narratorial voice is well-crafted and witty, and the characters are layered and complex. Although the book deftly explores the fluidity of gender and sexuality without moralizing or oversimplifying, there is little mention of race and all main characters are white. Unfortunately, while the end of the novel flies by in a stream of fast-paced action and nuanced character development, the first two-thirds are overwritten, with unnecessarily detailed descriptions and strange tangents.An entertaining queer romance that could have benefited from some additional editing. (Romance. 14-18) Copyright Kirkus Reviews, used with permission.
More book reviews at iDreamBooks.com