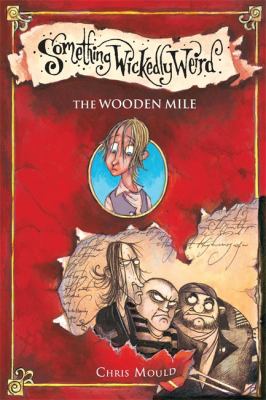 Crampton Rock is a peaceful fishing village on a remote island, accessible only at low tide. When Stanley Buggles inherits his great-uncle's house on Crampton Rock, it seems like a perfect place for a long summer holiday. But there's always something to go and spoil it all, isn't there?

Also published as 'The werewolf and the ibis'

Crampton Rock seems the perfect place to spend a long summer holiday. But all is not as it seems. Why are all the dogs three-legged? Is there really a werewolf on the loose? And what do the pirates want with Stanley Buggles? Suggested level: primary.

Gr 4-6-Stanley Buggles, 11, inherits a house on Crampton Rock from a previously unknown relative. Upon arriving there, he discovers that something strange is going on in the village. The dogs are missing limbs, and Stanley is sternly warned to stay off the moors and to be inside before nightfall. Cryptic messages from a talking mounted pike further pique his curiosity, and he becomes entangled with former pirates who want him to kill the werewolf that stalks the village at night (and who in human form owns a sweet shop by day). The pirates have their own agenda, but Stanley decides that he must take care of the werewolf regardless, to safeguard the town and avenge his great-uncle's death. A spare offering, the narrative moves quickly and focuses more on action than character development. Some plot points are problematic: Stanley's main concern after shooting the werewolf is how to explain the missing gun, and the next day Mr. Cake (the werewolf) is fully recovered and thanking Stanley with no explanation as to why. The black-and-white illustrations interspersed with the text are well done, but most readers will want to stick with Philip Ardagh or Lemony Snicket for far-fetched adventures and dark humor.-Amanda Raklovits, Champaign Public Library, IL (c) Copyright 2010. Library Journals LLC, a wholly owned subsidiary of Media Source, Inc. No redistribution permitted.

First published in England, the Something Wickedly Weird series opens with 11-year-old Stanley Buggles traveling to Crampton Rock and taking up residence at Candlestick Hall. He recently inherited the mansion and its strange contents from his great-uncle Admiral Bartholomew Swift, who perished in a dark encounter with a fearsome werewolf. Though both the housekeeper and the magical pike mounted in the hallway warn Stanley off the local mystery, the plucky lad can't hold back. Soon the pirates lurking nearby seem just as menacing as the werewolf, which is on the prowl again. With its fairly easy text, many black-and-white illustrations, and a dramatic scene silhouetted on the cover, this chapter book will appeal to young readers who like their fiction fast-paced and a bit scary. Mould's richly atmospheric ink drawings capture the rather macabre tone of the story. The second volume in the series, The Icy Hand (9781596433854), is now available in the U.S.--Phelan, Carolyn Copyright 2008 Booklist

(Primary, Intermediate) Strange things are afoot at Crampton Rock, as eleven-year-old Stanley Buggles soon learns after crossing a mile-long footbridge to reach the island. First off, there's the peculiar behavior of the townspeople: at nightfall they quickly scuttle home, while a few villagers head to lookouts. Then there's the talking pike (caught in 1827 by Stanley's great-uncle, whose estate he has inherited); this wall-mounted fish has a stern warning for the young lad. Finally, what's up with all the three-legged dogs? Turns out there's a werewolf roaming after dark, and three conniving pirates convince Stanley to kill it. But Stanley's good deed has a downside. Now the not-so-brave buccaneers can do late-night searches for the Ibis, a treasure hidden by Great-Uncle Bart. In The Icy Hand, Stanley makes a friend, meets the headless ghost of his great-uncle, and again fights off pirates who want the Ibis. "There's never a dull moment here, is there?" Stanley says, and readers will agree as Mould keeps the action coming. Mould's a witty writer with a deft hand for curious, wry details; these are played up in the stark pen-and-ink illustrations, which manage to be both grim and funny. Missing Harry Potter? Pick up Mould's new series. It's deliciously, wickedly weird. [review covers these titles: Something Wickedly Weird: The Wooden Mile and Something Wickedly Weird: The Icy Hand] From HORN BOOK, (c) Copyright 2010. The Horn Book, Inc., a wholly owned subsidiary of Media Source, Inc. No redistribution permitted.

A prolific British illustrator makes a rare foray across the pond with this faintly Gothic series opener. Eleven-year-old Stanley is amazed to learn that he's inherited an old mansion in Crampton Rock--a distant seaside town whose residents turn out to include a candy-store owner who changes into a werewolf every night, a trio of menacing (if ineffectual pirates) and a supposedly dead pike that utters cryptic warnings. Fortunately, Stanley is a clever, doughty lad, well capable of blasting the werewolf with a silver bullet, tricking the pirates into barrels and weathering other challenges with just occasional help from adult allies. Mould adds plenty of comically ghoulish ink drawings and silhouettes to his fluently written tale, and sets up a continuing plotline that leads to encounters with a decapitated ghost and more pirates in the next episode, The Icy Hand (ISBN: 978-159643-385-4, also September). Fine fare for fans of the likes of Paul Stewart and Chris Riddell's Far-Flung Adventures series or Philip Ardagh's Eddie Dickens trilogy. (Fantasy. 9-11) Copyright ©Kirkus Reviews, used with permission.
More book reviews at iDreamBooks.com