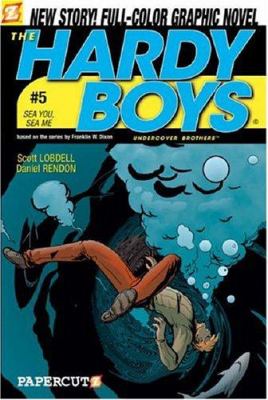 The Hardy Boys get caught in a perfect storm! Something's fishy when Frank and Joe go undercover aboard "the Silver Lining," an old fishing boat, to find out why teen crew members keep mysteriously vanishing. The number of suspects suddenly dwindles when one of the crew turns up dead! This is unquestionably the perfect Hardy Boys graphic novel to read at the beach! Ages 8 to 12.

Papercutz is the exciting new graphic novel publisher that's building a huge following among the next generation of comics fans. Even the most reluctant readers are becoming addicted to the Papercutz approach of giving classic characters a modern makeover! Each Papercutz graphic novel features comics stories drawn in the style of the popular Japanese comics known as manga, and beautifully rendered with state of the art color. While educators rave about the high quality of the Papercutz writing and artwork, readers 8 and up are simply enjoying the great adventures found in each fun-filled volume. Be sure to check out other Papercutz titles such as Nancy Drew, Totally Spies, and Zorro.

Frank and Joe go undercover to discover why teen seamen on an old fishing boat keep going missing. Is one of the crew responsible?

When a series of suspicious mishaps befall several deep sea fishing boats, the Hardy Boys are called into action by ATAC (American Teens Against Crime) before any more teen "green horns" can be hurt. But while in the past Frank and Joe have battled terrorists, master criminals, and multinational corporations, the undercover brothers have no experience fighting...the fury of the ocean!