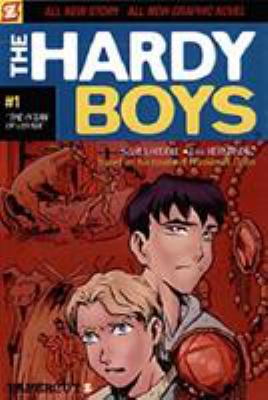 The Ocean of Osyria / Scott Lobdell, writer ; Lea Hernandez, artist ; based on the series by Franklin W. Dixon.

Genre/Form: Children's fiction. | Graphic novels. | Detective and mystery fiction. | Action and adventure fiction.DDC classification: 741.5 Summary: Frank and Joe Hardy, with Callie and Iola, search for a stolen Mid-Eastern art treasure, the Ocean of Osyria, to free their best friend, Chet Morton. Suggested level: primary, intermediate.
Tags from this library: No tags from this library for this title. Log in to add tags.
Fiction notes: Click to open in new window

Collected from the first three Hardy Boys comics, here's the complete saga of Frank and Joe's adventure in the war-torn Middle Eastern land of Osyria! After rescuing Jackpot, a kidnapped prize-winning racehorse, Frank and Joe are stunned to return to Bayport and discover that the Department of International Security has arrested their best friend, Chet Morton, for stealing a priceless art treasure! The Hardy Boys decide the only way to clear the friend is to journey to the Middle East and find the Ocean of Osyria themselves! Ages 8 to 12.

Papercutz is the exciting new graphic novel publisher that's building a huge following among the next generation of comics fans. Even the most reluctant readers are becoming addicted to the Papercutz approach of giving classic characters a modern makeover! Each Papercutz graphic novel features comics stories drawn in the style of the popular Japanese comics known as manga, and beautifully rendered with state of the art color. While educators rave about the high quality of the Papercutz writing and artwork, readers 8 and up are simply enjoying the great adventures found in each fun-filled volume. Be sure to check out other Papercutz titles such as Nancy Drew, Totally Spies, and Zorro.

Frank and Joe Hardy, with Callie and Iola, search for a stolen Mid-Eastern art treasure, the Ocean of Osyria, to free their best friend, Chet Morton. Suggested level: primary, intermediate.

Gr 4-6-The Hardy Boys make their first foray into graphic novels in this update of the classic series. The Ocean of Osyria, a priceless Middle Eastern artifact, is missing and has been mistakenly traced to Joe and Frank's friend Chet Morton. To save him from the treasure's rabid pursuers, the boys set out to find the necklace themselves. Both followers of the Hardy Boys and fans of graphic novels should form a sizable audience for this highly accessible adaptation. Manga devotees may also be intrigued: with their large eyes and angular features, the characters resemble the heroes and heroines of Japanese graphic novels. Osyria's entertaining mixture of action, suspense, and clean humor does not stray far from the content and tone of the boys' previous adventures, though an overeager attempt to update the series for a modern audience results in a few too many references to PDAs, video games, and the Internet. Simply adopting the popular graphic-novel format should be enough to attract a new generation of readers.-Lisa Goldstein, Brooklyn Public Library, NY (c) Copyright 2010. Library Journals LLC, a wholly owned subsidiary of Media Source, Inc. No redistribution permitted. All rights reserved.

Reviewed with Stefan Petrucha's The Demon of River Heights0 . Gr. 4-6. These graphic-novel-style versions of the Hardy Boys and Nancy Drew adventures will appeal to young graphic-novel fans as well as readers new to the venerable amateur sleuths. The pocket-size books, first in their respective series, are appealingly presented. The manga0 -influenced art is very colorful, and the brisk pacing, with just a few frames per page, makes for an easy read--perfect for reluctant readers. In The0 Ocean,0 those well-mannered Hardy boys, Joe and Frank (reimagined as tech-savvy crime solvers), return to fight a new generation of foes, the majority of whom appear to be Middle Eastern and French. Here, the young sleuths travel around the world in an attempt to recover a stolen artifact and save their best friend, who has been framed for the theft. Although this is a modernized version of the classic capers, with the Internet and cell phones playing key roles, the wholesomeness of the boys' principles remains the same. In The Demon, 0 Nancy, the classic American teenage heroine, manages to solve cases that baffle local police. This time she becomes involved in a student film about a local monster legend, which may turn out to be real, and a suspicious stranger arrives in town. For the most part, the artwork is crisp enough, but several pages appear to be substandard reproductions of original art. --Carlos Orellana Copyright 2005 Booklist
More book reviews at iDreamBooks.com