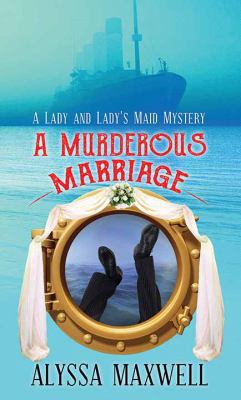 Genre/Form: Historical fiction. | Detective and mystery fiction.DDC classification: 813/.6 Summary: "When Lady Phoebe Renshaw's sister Julia chooses to marry the much older and wealthy viscount Gilbert Townsend, it is clear the marriage is not a love match. On their wedding night, Julia and Gil have a heated argument aboard his yacht. The the next morning, Gil's body is found in the water and suspicion falls on Julia"-- Provided by publisher.
Tags from this library: No tags from this library for this title. Log in to add tags.
Fiction notes: Click to open in new window

Since the Great War, some family fortunes have suffered, including those of the Renshaws. Despite being the granddaughter of an earl, Julia Renshaw is under pressure to marry for money -- and has settled for Gilbert Townsend, a viscount and a wealthy industrialist. He is decades older than Julia, and it's clear to her sister Phoebe -- and to Eva, who has been like a surrogate mother to the girls -- that this is not a love match. Nevertheless, the wedding takes place -- and in a hurry.

"When Lady Phoebe Renshaw's sister Julia chooses to marry the much older and wealthy viscount Gilbert Townsend, it is clear the marriage is not a love match. On their wedding night, Julia and Gil have a heated argument aboard his yacht. The the next morning, Gil's body is found in the water and suspicion falls on Julia"-- Provided by publisher.

Set in April 1920, Maxwell's winning fourth Lady and Lady's Maid mystery (after 2017's A Devious Death) takes Lady Phoebe Renshaw and her maid, Eva Huntford, to Cowes, on the Isle of Wight, for the marriage of Lady Phoebe's older sister, Julia, to Viscount Gil Townsend, a wealthy industrialist several decades her senior. The Renshaws hope the alliance, no love match, will improve the family fortunes, which have declined since the Great War. The day after the wedding, Gil disappears, only to be found drowned at the Royal Yacht Squadron. It soon becomes clear that Gil, who had his share of enemies, was pushed into the water-and Julia is a prime suspect. Showing events from the points of view of both the privileged and the servant classes, Maxwell tells her tale well. The action unfolds smoothly until well-disguised clues lead to a clever and satisfying denouement. Downton Abbey fans will have fun. Agent: Evan Marshall, Evan Marshall Agency. (Feb.) © Copyright PWxyz, LLC. All rights reserved.

A marriage made to save a family's fortunes comes to a quick and unfortunate end.Lady Julia Renshaw knows she has to marry a wealthy man to keep up the family estate even though she's in love with someone else. Her sister Phoebe urges her to back out of her engagement to wealthy Viscount Annondale, who wants to produce an heir with an aristocratic wife. But Julia insists that if she can provide an heir and inherit the estate, the family will be secure for life once her much older husband passes on. She tells Phoebe that unless she marries well, their younger brother, Fox, will be unable to maintain the estate and provide for them. Strangely, Annondale insists that the wedding reception be held on the yacht named for his first wife and docked at Cowes. After a catered meal, he quickly dismisses his guests except for those who will accompany the couple on their honeymoon cruise: his sister, Veronica Townsend; his best man, Sir Hugh Fitzallen; Mr. Mowbry, the wedding photographer; and Annondale's cheeky secretary, Mildred Blair. When Julia arrives at her family's hotel in the middle of the night with a badly cut hand and a story of Annondale's accusing her of flirting with the photographer in front of the crew, her sisters and her loyal former maid, Eva, realize that the honeymoon has well and truly ended. Julia returns to the yacht to find Annondale missing. When his body washes up near the yacht club and blood is found on the railing, she's arrested for his murder. Both Phoebe and Eva have experience in solving mysteries (A Devious Death, 2017, etc.), and since they know Julia's innocent and the police aren't looking for other suspects, they plan to use all their sleuthing skills to find out who else wanted Annondale dead.Maxwell, who always puts an interesting spin on her country-house mysteries set between the great wars, delivers once again in this tale of love, hate, revenge, and country houses in peril. Copyright Kirkus Reviews, used with permission.
More book reviews at iDreamBooks.com