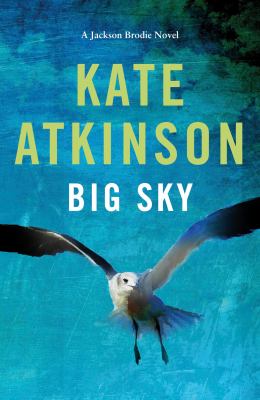 Genre/Form: Detective and mystery fiction.DDC classification: 823.92 Summary: Jackson Brodie has relocated to a quiet seaside village, in the occasional company of his recalcitrant teenage son and an ageing Labrador, both at the discretion of his ex-partner Julia. It’s picturesque, but there’s something darker lurking behind the scenes. Jackson’s current job, gathering proof of an unfaithful husband for his suspicious wife, is fairly standard-issue, but a chance encounter with a desperate man on a crumbling cliff leads him into a sinister network, and back across the path of someone from his past.
Tags from this library: No tags from this library for this title. Log in to add tags.
Fiction notes: Click to open in new window

The highly anticipated return of Jackson Brodie, 'like all good detectives, a hero for men and women alike' ( The Times)

' Big Sky is laced with Atkinson's sharp, dry humour, and one of the joys of the Brodie novels has always been that they are so funny' (Observer)

Jackson Brodie has relocated to a quiet seaside village in North Yorkshire, in the occasional company of his recalcitrant teenage son Nathan and ageing Labrador Dido, both at the discretion of his former partner Julia. It's a picturesque setting, but there's something darker lurking behind the scenes.

Jackson's current job, gathering proof of an unfaithful husband for his suspicious wife, seems straightforward, but a chance encounter with a desperate man on a crumbling cliff leads him into a sinister network-and back into the path of someone from his past. Old secrets and new lies intersect in this breathtaking new novel, both sharply funny and achingly sad, by one of the most dazzling and surprising writers at work today.

Jackson Brodie has relocated to a quiet seaside village, in the occasional company of his recalcitrant teenage son and an ageing Labrador, both at the discretion of his ex-partner Julia. It’s picturesque, but there’s something darker lurking behind the scenes. Jackson’s current job, gathering proof of an unfaithful husband for his suspicious wife, is fairly standard-issue, but a chance encounter with a desperate man on a crumbling cliff leads him into a sinister network, and back across the path of someone from his past.

Atkinson's slow-moving fifth Jackson Brodie novel (after 2010's Started Early, Took My Dog) finds the former policeman turned PI, who's now based on the east coast of Yorkshire, grappling with parenting. Brodie, who endured a traumatic childhood-a mother lost to cancer, a sister murdered, and a brother who committed suicide-shares custody of 13-year-old Nathan Land, who has an "ego big enough to swallow planets whole," with Nathan's mother, Julia. Though Brodie has some routine work surveilling a suspected cheating spouse, the action only hits high gear relatively late when he happens upon a man about to jump off a cliff, Vince Ives, whose wife, Wendy, was recently fatally bludgeoned with a golf club. Brodie manages to save Vince's life, and his look into Wendy's death involves him in an ugly case of human trafficking. Atkinson has been better at balancing personal and professional story lines, and the presence of a figure from Jackson's past, now a cop involved in an inquiry looking at establishment figures, won't resonate for first-timers. Series fans will best appreciate this outing. Agent: Kim Witherspoon, Inkwell Management. (June) © Copyright PWxyz, LLC. All rights reserved.

It's been eight years since Atkinson's last Jackson Brodie mystery (Started Early, Took My Dog, 2011), and, while the three historical novels she has written since then all with some connection to WWII have been uniformly brilliant, fans of the ever-brooding, painfully tenderhearted private investigator will be thrilled that Brodie is finally back. He's living in a remote cottage near the sea in Yorkshire, but somehow he still finds no shortage of troubled souls washing up around him needing help. It begins with a runaway bride and a sad sack with suicide on his mind, and, from there, Jackson's menagerie of broken-winged creatures leads him into something much darker, something that will thoroughly reinforce his ingrained pessimism. (""Have you ever tried being an optimist?"" Jackson's former partner, actress Julia, asks him. ""Once,"" Jackson replies. ""It didn't suit me."") Using her signature narrative style, Atkinson not only tells the story from multiple points of view, but also moves back and forth in time, letting us see new sides of an incident from several characters' perspectives. This technique feeds a rich kind of dramatic irony, as we know marginally more than the people in any one scene do, but never quite enough. As the lives of several Yorkshire couples slowly swirl out of control, with the ripples of dysfunction, buried abuse, and tightly held secrets gradually drawing Jackson into their red tide, we marvel at Atkinson's rare ability to create in a relatively few but stunningly deft brushstrokes at least a half-dozen characters with the depth and complexity to own their own novel. Another dazzler from a writer whose talents know no bounds.HIGH-DEMAND BACKSTORY: Atkinson's blend of literary fiction and crime novel attracts readers in great numbers from both those constituencies.--Bill Ott Copyright 2019 Booklist

Jackson Brodie is back.This is Atkinson's fifth Jackson Brodie novel (Started Early, Took My Dog, 2011, etc.), but fans know that the phrase "Jackson Brodie novel" is somewhat deceptive. Yes, he is the hero in that he is a private investigatorformer cop, military veteranwho solves (usually) mysteries. But he is not so much the central character as the grumpy, anxious, largehearted gravitational field that attracts a motley assortment of lost souls and love interests. In this latest outing, Jackson is a half-duty parent to his teenage son while the boy's mother, an actor, finishes her run on a detective series. Vince Ives is a more-or-less successful middle-class husband and father until his wife leaves him, his boss makes him redundant, and he becomes a murder suspect. Crystal Holroydnot her real namehas built a brilliant new life for herself, but someone from her past is threatening her daughter. Both Vince and Crystal seek help from Jackson, with varying results. Meanwhile, Jackson's protge, Reggie Chase, has risen through the ranks in the police force and is taking a fresh look at an old case. That these stories intertwine is a given. "A coincidence is just an explanation waiting to happen" is one of Jackson's maxims; it could also serve as an ironic epigram for Atkinson's approach to the mystery genre. A small cast of characters collides and careens in a manner that straddles Greek tragedy and screwball comedy. The humor is sly rather than slapstick, and Atkinson is keenly interested in inner lives and motivations. There are villains, certainlyhuman trafficking and the sexual abuse of children figure prominently herebut even the sympathetic characters are complicated and compromised. Jackson has a strong moral code, but his behavior is often less than ethical. The same is true of Vince, Crystal, and Reggie. The deaths and disappearances that Jackson investigates change with every book, but the human heart remains the central mystery.The welcome return of an existential detective. Copyright Kirkus Reviews, used with permission.
More book reviews at iDreamBooks.com