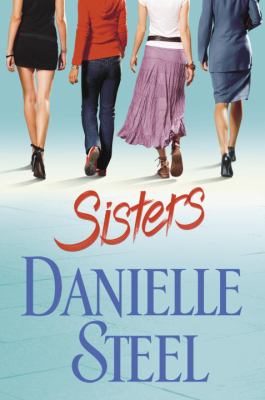 DDC classification: 813/.54 Subject: Four sisters, a Manhattan brownstone, and a tumultuous year of loss and courage are at the heart of Danielle Steel’ s new novel about a remarkable family, a stunning tragedy– and what happens when four very different young women come together under one very lively roof.
Tags from this library: No tags from this library for this title. Log in to add tags.
Fiction notes: Click to open in new window
Total holds: 0

Four sisters, a Manhattan brownstone, and a tumultuous year of loss and courage are at the heart of Danielle Steel's new novel about a remarkable family, a stunning tragedy--and what happens when four very different young women come together under one very lively roof.<br> <br> Candy-it's the only name she needs--is blazing her way through Paris, New York, and Tokyo as fashion's latest international supermodel. . . .<br> <br> Her sister Tammy has a job producing the most successful hit show on TV, and a home she loves in L.A.'s Hollywood Hills. . . . In New York, oldest sister Sabrina is an ambitious young lawyer, while Annie is an American artist in Florence, living for her art. . . . On one Fourth of July weekend, as they do every year, the four sisters come home to Connecticut for their family's annual gathering. But before the holiday is over, tragedy strikes and their world is utterly changed.<br> <br> Suddenly, four sisters who have been fervently pursuing success and their own lives--on opposite sides of the world--reunite to share one New York brownstone, to support each other and their father, and to pick up the pieces while one sister struggles to heal her shattered body and soul. Thus begins an unscripted chapter of their lives, as a bustling house is soon filled with eccentric dogs, laughter, tears, friends, men . . . and the kind of honesty and unconditional love only sisters can provide. But as the four women settle in, they are forced to confront the direction of their respective lives. As the year passes and another July Fourth approaches, a season of grief and change gives way to new beginnings--as a family comes together to share its blessings and a future filled with surprises and, ultimately, hope.<br> <br> With unerring insight and compassion, Danielle Steel tells a compelling story of four sisters who love and laugh, struggle and triumph . . . and are irrevocably woven into the fabric of each other's lives. Brilliantly blending humor and heartbreak, she delivers a powerful message about the fragility--and the wonder--of life.

Four sisters, a Manhattan brownstone, and a tumultuous year of loss and courage are at the heart of Danielle Steel’ s new novel about a remarkable family, a stunning tragedy– and what happens when four very different young women come together under one very lively roof.

Four stunningly beautiful Connecticut-bred sisters pursue their disparate careers in prolific Steel's (H.R.H.) latest. There's Candy, 21, a supermodel with an eating disorder, on location in Paris; Annie, 26, a RISD-grad studying painting in Florence; Tammy, at 29 an L.A. TV producer with a new hit and no life; and Sabrina, 34, a workaholic, commitment-phobic family attorney. No matter what, all meet at Mommy and Daddy's for July 4, Thanksgiving and Christmas. During one of the reunions, a disastrous car accident kills their beautiful, dutiful mother and leaves artist Annie blind. Sabrina comes up with a plan for the sisters to live ensemble in a New York brownstone, so that they might grieve and ease Annie's transition into the sightless world. The questions then become Will Candy eat? Will Sabrina commit? Will Tammy have a hit? Will Annie transition? And will Dad love again? Legions of fans expect an emphatic yes, and they won't be disappointed. But they can also expect decapitation, rape and emotional betrayal, which work like little shocks to keep pages turning. (Feb.) (c) Copyright PWxyz, LLC. All rights reserved

Steel's latest novel records a volatile year in the lives of four sisters following the death of their adored mother in an automobile accident. The women are all beautiful and successful in their chosen fields but, however improbably, have no such luck in their personal lives. Sabrina is an attorney afraid of committing to her boyfriend because she doesn't think her parents fairy-tale marriage can be replicated. Tammy is a thriving television producer whose closest relationship is with her dog. Annie was studying painting in Florence until she was struck blind in the car accident that killed her mother. And Candy is a globe-trotting supermodel with an eating disorder and a history of bad relationships. After the accident, the sisters decide to live together in New York City as a way to help Annie adjust to her loss of vision. Though they face many trials during the course of the year, all is well in the end, with each sister moving toward her own version of "happily ever after." This contains a bit more gory detail than is usual in a Steel story, but her many fans will enjoy it nonetheless.--"Hughes, Kathleen" Copyright 2007 Booklist

In Steel's latest (H.R.H., 2006, etc.), four far-flung adult sisters move into a New York brownstone after tragedy strikes their close-knit clan. The beautiful, surprisingly down-to-earth Adams sisters are blessed with fabulous careers. Sabrina, the eldest, is a New York divorce attorney. Workaholic Tammy produces a popular TV drama in LA. Supermodel Candy jets around the world to pose for pictures. Painter Annie isn't as rich as the others, but she lives a charmed bohemian life in Italy. No matter where they are, nothing keeps the four from coming together every Fourth of July at their childhood home in Connecticut to celebrate with their beloved parents. During preparations for the annual party, a car accident blinds Annie and kills their mother. The sisters, led by Sabrina, sublet a furnished house for a year so they can support the severely depressed Annie as she learns to live with her disability. The other surviving family members have issues to sort out as well. Na™ve Candy has a weakness for European playboys and doesn't eat. Single Tammy, who finds a less glamorous job in reality TV, is so used to attracting weirdos and narcissists that she nearly despairs of finding Mr. Right. Sabrina is so terrified of committing to her marriage-minded boyfriend Chris that she risks losing him. Their lonely father, Jim, quickly falls into the clutches of a young divorcee who went to high school with Sabrina. But if fate does occasionally deal harsh blows to the Adamses, they always have each other (and their cute little pet dogs) to keep even the saddest situations from becoming too dark. By the close of this momentous year, the sisters are even tighter, and better equipped to go forward with their lives. Female bonding with a cozy slumber-party vibe. Copyright ©Kirkus Reviews, used with permission.
More book reviews at iDreamBooks.com