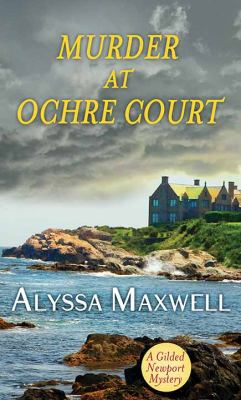 Summary: In the summer of 1898, reporter Emma Cross investigates the shocking death of a debutante at her coming-out ball among the bright lights of Newport's high society.
Fiction notes: Click to open in new window
Total holds: 0

In the summer of 1898, reporter Emma Cross investigates a shocking death among the bright lights of Newport's high society . . . After a disappointing year as a society columnist for the Herald and staying with her more well-heeled Vanderbilt relatives in New York City, Emma has returned to the salty air, glittering ocean vistas, and grand stately mansions of Newport, Rhode Island, more determined than ever to report on hard news.

In the summer of 1898, reporter Emma Cross investigates the shocking death of a debutante at her coming-out ball among the bright lights of Newport's high society.

Maxwell's diffuse sixth Gilded Newport mystery (after 2017's Murder at Chateau sur Mer) takes reporter Emma Cross back to Newport, R.I., after a year in New York, where she unsuccessfully tried to break out of society reporting into hard news. Her first assignment at home is the coming-out ball of 19-year-old Cleo Cooper-Smith, which is being hosted by Cleo's aunt, May Goelet, at lavish Ochre Court. Mrs. Goelet hopes to showcase her protégé in an elaborate tableau vivant featuring the debutante as Cleopatra on a throne illuminated by electric bulbs, still a costly innovation in 1898. Instead, an electric shock kills Cleo and sends Dale Hanson, who wired the scene, and police officer Jesse Whyte to the hospital. Emma decides to investigate to prove Dale was not at fault and to help Jesse, her would-be suitor, during his recovery. Maxwell dramatically depicts the era's contentious transition from gaslight to electricity, but the main plot sags under a glut of overcomplicated subplots and a melodramatic, implausible conclusion. Series fans will enjoy following Emma's changing circumstances. Agent: Evan Marshall, Evan Marshall Agency. (Aug.) © Copyright PWxyz, LLC. All rights reserved.

Poor relation to the Gilded Age society Four Hundred, Emma Cross must make her way as a newspaper reporter. She wants to report hard news, but because she has entrée to the salons and ballrooms, she is stuck on the society page. On her way to her hometown of Newport, Rhode Island in 1898, she vows that after she finishes her story on the coming-out ball for Cleo Cooper-Smith, she will take no more such assignments. Still, it looks to be a spectacular swan song. Hostess Mary Goelet has spared no expense at her Ochre Court mansion, having a ballroom wired for electricity to stage Cleo as Cleopatra in an Egyptian-themed tableau. It goes horribly wrong, and Cleo is electrocuted as she sits on the gilded throne. Suddenly, Emma has her hard-news story, and she pursues leads as diverse as conflicts between the gas workers and the electricians working on a new mansion, enmities among officers home on leave from the Spanish-American War, and corrupt building practices in New York City. Satisfying historical mystery reminiscent of Greer Macallister's Girl in Disguise (2017).--Karen Muller Copyright 2018 Booklist

The magnificent mansions of Newport, Rhode Island, provide the setting for high-society murder in the Gilded Age.Emma Cross, a society columnist for a New York newspaper, yearns to be an investigative reporter like the famous Nellie Bly. She gets a chance when she's sent to her hometown of Newport to report on a coming-out ball which will be attended by Silas Griggson, a self-made real estate developer; Silas is of interest because one of his tenements recently collapsed with fatal consequences, a calamity he blamed on a foreman who soon turned up dead. Emma, who counts the Vanderbilts among her relatives but struggles to keep up Gull Manor, the seaside home she inherited from an aunt, has two suitors: Derrick Andrews, wealthy, handsome, and willing to help her solve mysteries (Murder at Chateau su Mer, 2017, etc.), and Jesse Whyte, a Newport detective whose lifestyle is more like her own. At the ball, Emma picks up on uncomfortable undercurrents among the guests. When Cleo Cooper-Smith takes her place on a throne illuminated by electricity, the crowd is wowed until the lights go out. Hastily arranged candlelight reveals that Cleo's been electrocuted. Although Cleo is not universally loved and has been cruel to her handicapped older sister, her father wants the electrician arrested. Emma, who's known Dale Hanson for years, is convinced he had nothing to do with the death, which she soon discovers was murder. With friends among the idle rich and ordinary townsfolk alike, Emma is well-placed to dig up clues, and her search takes her from sumptuous mansions to the local Army post, her stubborn, unladylike behavior putting her in danger while she ponders her options.Plenty of red herrings and an intimate look at the world of the wealthy and famous make for a rich broth of a mystery. Copyright Kirkus Reviews, used with permission.
More book reviews at iDreamBooks.com