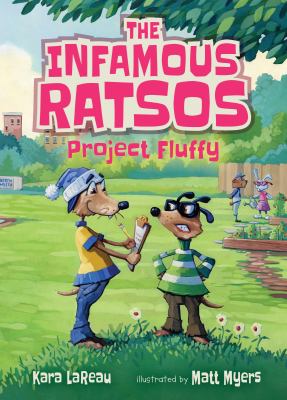 Louie Ratso tries to help super-cool Chuck Wood win the heart of his friend Fluffy Rabbitski in the third installment of the Infamous Ratsos.

Chuck Wood is the most popular kid in school, and Louie Ratso can't believe that Chuck has asked him for help! Chuck likes Louie's friend Fluffy Rabbitski, and he wants Louie to help him get Fluffy to notice him. As for Ralphie Ratso, he can't believe that his brother wants to spend all his time with Chuck instead of with him. Meanwhile, despite Louie and Chuck's attempts to get Fluffy's attention, she has eyes for only one thing: her garden. But there may be hope. As their father, Big Lou, tells his boys, the best way to get someone to like you is to show that you're interested in what they like. After all, that's how Big Lou won over Mama Ratso years ago. Can Louie help Chuck find a way into Fluffy's heart? And will Ralphie find a way to let his brother know how much he misses him?

A poetry contest and a bit of romantic intrigue lead the Ratso brothers, their fellow animal students, and, of course, readers to further insights about friendship and respect for others. Shrugging off plans to work with his sib Ralphie on a poem, Louie agrees to help cool kid Chuck Wood get classmate Fluffy to notice him. But Louie's hackneyed ideas about what girls like flowers, candy, displays of athletic prowess get zero traction with Fluffy, who is laser focused on her patch of community garden. Once Chuck breaks out of his own self absorption and actually notices this, he's able to make strides. On the other paw, along with getting an earful from his single dad ( Women aren't projects, or objects ), and having alienated his brother, Louie is left to his own literary devices. His rhymed apology is far clumsier than Ralphie's sentimental verse about friendship, but sincere and sufficient to re-cement the brothers' relationship. A pleaser for fledgling chapter-book readers, rather more heavily and explicitly agenda-driven than previous episodes, but chock full of positive values and life lessons.--John Peters Copyright 2018 Booklist

BMOC at Peter Rabbit Elementary and star pitcher for the Big City Critters baseball team, Chuck Wood is the coolest. Returning characters from the series (beginning with The Infamous Ratsos, rev. 9/16), such as Millicent and Tiny, idolize him and want to be in his orbit of celebrity. But theres one classmate Chuck cant win over: hes smitten by Fluffy Rabbitski, who has no time for him because she is busy planning her garden. Chuck seeks advice from Louie Ratso, who is thrilled by Chucks attention and immediately outlines a plan. Problem is, younger Ratso brother Ralphie wants Louies help in writing a poem for a class contest, but is ignored since all of Louies attention is on Chuck. As with the previous entries, the characters act as stand-ins for young readers navigating real-world situations, this time concentrating on friendship, loyalty, and responsibility, threads that are woven subtly throughout the chapters. Best of all, LaReau trusts readers to draw their own conclusions about the characters and their feelings, although Myerss playful black-and-white illustrations give some clues to Chucks self-importance, Ralphies frustration, and Louies self-abasement. Here readers find big ideas expressed in simple words and actions, creating a fine addition to a solid series. betty carter (c) Copyright 2018. The Horn Book, Inc., a wholly owned subsidiary of Media Source, Inc. No redistribution permitted.

It's Poetry Monthtime for the First Annual Peter Rabbit Elementary School Poetry Contest!First-, second-, and third-place winners each get a gift certificate to Clawmart. Rat brothers Louie and Ralphie Ratso intend to win so they can buy new skateboards. But then woodchuck Chuck Wood, the coolest kid in school, derails the brothers' plans. Chuck has a crush on geek-girl gardener Fluffy, a spectacles-wearing rabbit pal of Louie's, and he wants Louie's help getting her attention. Soon Louie's abandoning his brother and their poetry project to carry out Project Fluffy. Louie's advice: give her flowers, write her a poem, give her candy. After all, girls love that stuff: "It's, like, a fact," Louie tells Chuck prior to each attempt. After numerous failures, Ralphie tells his brother: "Fluffy is a person and not a project." Their dad, Big Lou, agrees: "Women aren't projects or objects." To get a girl's attention you need to find out what she likes and take an interest in it. When Louie passes this advice to Chuck, will the love-struck groundhog give it a try? A wry, third-person, present-tense voice narrates this story about crushes, brothers, and togetherness. While the denouement is developmentally spot-on (Fluffy and Chuck decide to be friends), the heteronormative assumptions about romance feel a little stodgy. Large type, lots of comedic black-and-white illustrations, and reading-level-appropriate text suit the book to newly independent readers.The Ratso brothers' third outing is good, anthropomorphic fun. (Animal fantasy. 5-9) Copyright Kirkus Reviews, used with permission.
More book reviews at iDreamBooks.com