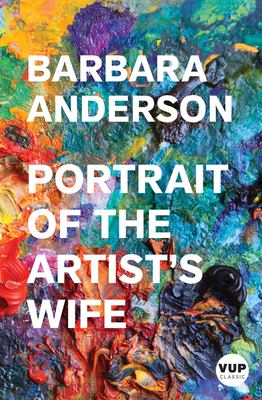 Genre/Form: New Zealand fiction -- 20th century. | Domestic fiction.DDC classification: NZ823.2 Summary: "New Zealand in the 1950s is a place where men do the work and women have the babies. While Sarah Tandy is determined to nurture her talent as a painter and keep her marriage intact, her husband, celebrated novelist Jack Macalister, is equally determined to remain the cheerfully philandering and selfish man that he is"-- Back cover.
Tags from this library: No tags from this library for this title. Log in to add tags.

Victoria University Press is enormously proud to publish this new edition of one of New Zealand's favourite novels, 26 years after it was first published to critical acclaim here and in the UK and US. While Sarah Tandy is determined to nurture her talent as a painter and keep her marriage intact, her husband, Jack Macalister, is equally determined to remain the cheerfully philandering and selfish man that he is.

"New Zealand in the 1950s is a place where men do the work and women have the babies. While Sarah Tandy is determined to nurture her talent as a painter and keep her marriage intact, her husband, celebrated novelist Jack Macalister, is equally determined to remain the cheerfully philandering and selfish man that he is"-- Back cover.

Set in New Zealand, this wonderful story recounts the stormy but enduring marriage of artist Sarah Tandy to writer Jack Macalister. They are very young, poor, and expecting a baby when they marry, but they are determined to pursue careers in their respective fields. Both Sarah and Jack are successful. The obstacles to Sarah's development are particularly formidable, but, paradoxically, the marriage survives because of the total selfishness of the partners. While emphasizing the independence of each character, the author also beautifully describes their interdependence. ``His wife's absorption while working left Jack unscathed, as his silences did her. They shared throughout their lives the same unease, the same sense of work unfinished. . . . They respected each other's judgement, which was not given until asked for.'' This work deserves a wide audience; Anderson's writing is so good that the New Zealand colloquialisms actually serve to enhance the story and place us in the plot with great immediacy. Recommended for most collections.-- Patricia C. Heaney, Nassau Community Coll. Lib., Garden City, N.Y. (c) Copyright 2010. Library Journals LLC, a wholly owned subsidiary of Media Source, Inc. No redistribution permitted.

Possessed of an assured, pared-down wisdom, this appealing novel opens as New Zealand painter Sarah Tandy gives a eulogy for her late husband, writer Jack Macalister, at a reception in honor of his posthumously published novel. What follows is the delicately drawn third-person recollection of Sarah's life with Jack, as both artist's wife and artist in her own right. Anderson ( Girls' High ) portrays Sarah, Jack, their friends and family with deft subtlety, her unflagging attention to everyday details (those selected and those left out) establishing significance in an indirect, convincing way. The narrative voice is true to each stage of Sarah's life, beginning with her childhood, shared with Jack as a family friend, through the early years of their marriage, their foibles and infidelities, to Sarah's struggle to find herself through her work while still fulfilling the roles of wife and mother. Sarah at 20 is as believable and engrossing a character as she is at 50. Anderson weaves together events of several decades in a seamless, succinct narrative that captures both the simplicity and the complexity of her character's life. (Apr.) (c) Copyright PWxyz, LLC. All rights reserved

Both of these romantic, virtuoso novels--by a New Zealander and a Canadian, respectively--are about the entanglement of love and art, but while one is about creation and fulfillment, the other explores obsession and isolation.Anderson's invigorating and eventful novel is the more traditional of the two. The magnetic story line oscillates between two poles of sexuality and artistic drive: Sarah Tandy and Jack Macalister. Sarah senses her destiny as a painter at a young age, just as Jack knows he's a writer, but their passion for each other complicates matters, as Sarah gets pregnant at age 17. They marry unceremoniously and move into a small, smelly seaside cottage, determined to realize their dreams. Sarah, pregnant and wind-whipped, paints at the beach every day; Jack writes late into the night in their cramped kitchen. And they do, ultimately, earn success, not only as artists but also as parents and soulmates, having forged an alliance that withstands selfishness, infidelities, and the need for solitude. Anderson's dialogue is enrapturing, her confrontations are stirring, and her skill is formidable in rendering emotional growth, time, and the monomania and doggedness of the artist's life.Where Anderson is earthy, Urquhart is gothic, poetic, and fanciful. Like her first novel, The Whirlpool (1990), her second is laced with symbolic landscapes and slices of history. Startlingly original, stormy, and ravishingly visual, it spans several periods of time and two continents. In Toronto's recent past, we watch two lonely children grow up obsessed with works of art. Ann escapes life's dreary sorrows by immersing herself in Wuthering Heights, while Arthur is bewitched by the murals of Tintoretto, a daring sixteenth-century Venetian painter. They meet as adults who have made careers out of their manias and fall into a rather brutal affair. Their destructive liaison is echoed by the fatal relationship of a pair of early-twentieth-century balloonists and lovers. The woman dies on the moors Emily Bronte made famous, but she remains part of the novel as a ghost. She meets Bronte's ghost, and they entertain each other, and us, with their life stories. Meanwhile, on more solid ground, Ann and Arthur finally get free of each other, and Ann finds true love on the wind-stroked, sky-domed moors of her dreams. A boldly metaphoric and gyroscopic inquiry into the nature of fantasy and myth and the hectic weather systems of the heart. ~--Donna Seaman

That title's misleading: the portrait (in this 63-year-old New Zealand author's second novel, though first US publication) is of a marriage between two artists, and comes attached to an elaborate family chronicle. When 52-year-old Jack McAlister dies of a heart attack in l987, he's New Zealand's most respected novelist, while his wife Sarah Tandy (first seen launching Jack's last, posthumous, book) is a painter of note who's exhibited in London and Sydney. The two were childhood friends in Hawke's Bay, a bucolic community perfect for raising kids but less good for expanding minds. When Jack accidentally gets the 17-year-old Sarah pregnant (the year is 1952) and their parents reluctantly consent to their marriage, the lovebirds seize the chance to move to the big city (Wellington, the capital) and don't allow the birth of baby Dora to throw them off their creative stride. Jack does his four pages a day, while Sarah knows she must ``keep her energy for painting'' and learn from Otto Becker, a wonderfully helpful retired Austrian Jewish art teacher she's met on the beach. ``Jack understood Sarah's need to work...they shared the tunnel-vision selfishness'' of committed artists. Though the marriage will later be strained by Jack's drinking and fooling around, essentially it's a harmonious arrangement--but this lack of a core tension is bad news for the reader, who must make do with self-contained episodes (a second accidental baby, a year in London) as the novel moves through its 44-year span and a crowd of minor characters. Finally, it's prize- winning Jack who steals the show (Sarah's Sydney success getting only one paragraph). Jack and Sarah's creative struggles are obscured by domestic trivia, making this no more than a mildly agreeable read.
More book reviews at iDreamBooks.com