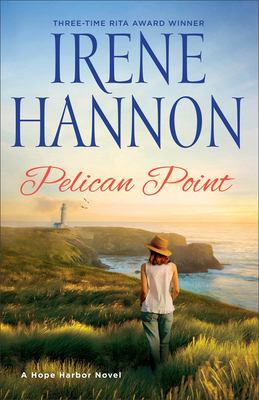 A crumbling lighthouse is not part of the inheritance Army doctor Ben Garrison expects to claim when he journeys to Hope Harbor. Fresh out of the service, he wants only to unload the tower of bricks, decompress from years of treating battlefield trauma, and prepare to launch his civilian career.

Hope Harbor Herald editor Marci Weber has other ideas. She may not be a Hope Harbor native, but the small Oregon seaside town has become home--and she's determined to save the Pelican Point landmark.

Sparks fly as the two go head to head over the fate of the lighthouse. But when they start to cooperate, a different kind of fire ignites. And as they work together, might Hope Harbor heal the hearts of these two romance-wary souls?

Bestselling author Irene Hannon invites readers back to their favorite town for a story that will light a beacon of hope within their hearts.

After inheriting a crumbling lighthouse, Dr. Ben Garrison is more than ready to get rid of it until he meets a determined Marci Weber who wants to save the landmark. Can she make him see her point of view?

After inheriting a crumbling lighthouse, Army doctor Ben Garrison is more than ready to get rid of it. Then he meets Marci Weber, the determined editor of the Hope Harbor Herald, who wants to save the landmark. Can she make him see her point of view?

This fourth novel in the Hope Harbor series from Hannon (after Sandpiper Cove) introduces army doctor Ben Garrison to the Oregon coast. Ben used to spend summers at Hope Harbor, taking long walks along the shore, but hasn't been back for years. When his grandfather dies of a heart attack, he returns to handle the funeral and figure out what to do with the lighthouse that he didn't know his grandfather owned. When Ben decides to sell the aging landmark and join a medical practice in Ohio, Hope Harbor Herald editor Marci Weber, determined to find a way to save the lighthouse, tries to convince him to restore it himself. Although the pair tangle at first, they begin to work together to see if the lighthouse can in fact be salvaged. Hannon adds a frisson of mystery around the history of the lighthouse to keep readers turning pages and writes eloquently about the roadblocks veterans face when they return to civilian life. Hannon touches on themes of overcoming the past through new relationships, bonding with unlikely allies over a mutual goal, and the recuperative power of securing a family legacy- all of which make for an inspiring narrative that will please her large fan base. (Apr.) © Copyright PWxyz, LLC. All rights reserved.

After a long flight from the Middle East to arrange his grandfather's funeral, former U.S. Army surgeon Ben Garrison is surprised to learn that his inheritance includes a decrepit lighthouse. He'd planned on a brief stay in Oregon before settling into his new job in Ohio. Newspaper editor Marci Weber only moved to Hope Harbor two years ago, but she has already become very attached. When she learns that Ben plans to sell the local landmark, Marci quickly rallies the town to come up with a way to save the Pelican Point lighthouse. Sparks fly between the fiery redhead and the handsome doctor in Hannon's (Sandpiper Cove, 2017) sweet romance, but both Marci and Ben have been burned badly in the past, and neither is looking for a long-distance romance. Readers will root for secondary characters Rachel, Marci's assistant, and her husband, Greg, as they struggle with their marriage a few months after Greg loses his leg in an IED explosion. The fourth book in Hannon's Hope Harbor series is a testament to the power of faith, hope, and love.--Quillen, C. L. Copyright 2018 Booklist
More book reviews at iDreamBooks.com