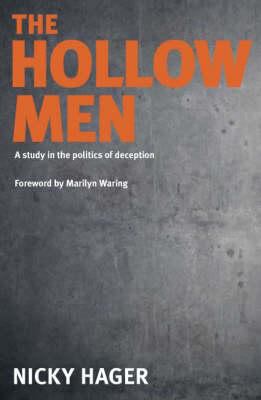 The hollow men : a study in the politics of deception / Nicky Hager.

There has never been a book about New Zealand politics like this before. Over a two year period, sources from inside the National Party provided Nicky Hager with an astonishing collection of internal reports, emails, appointment diaries, meeting minutes and face-to-face interviews, documenting the rise to power of Don Brash and a two year campaign to become government. The result is an unprecedented picture of the internal workings of a political party and a disturbing, but riveting study into the nature of modern politics. The National Party sources were prompted to blow the whistle because they believed their party was behaving in dishonest, unprincipled and even unlawful ways. In The Hollow Men we are able to see - up close and in the participants' own words - the secret backers behind Don Brash's successful leadership challenge; the precise details of the party's hidden alliances with the Exclusive Brethren church and others; the strategies behind the Orewa speeches; the identities of the big donors; the cynical imported election campaign techniques and foreign advisers used by the party; and much, much more.The book goes to the heart of why many New Zealanders feel disillusioned about politics. Nicky Hager believes that the way politicians and others in politics conduct themselves - the games they play to advance themselves - can harm the whole political system. Exposing their activities is the first step towards change.