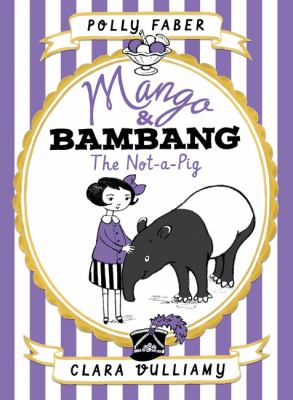 Summary: Mango Allsorts is good at all sorts of things, not just karate and chess. Bambang is most definitely not-a-pig and is now lost in a very busy city. When the two unexpectedly meet, a friendship begins, filled with adventures, and of course, plenty of banana pancakes.
Tags from this library: No tags from this library for this title. Log in to add tags.
Fiction notes: Click to open in new window

Mango Allsorts is good at all sorts of things, not just karate and chess. Bambang is most definitely not-a-pig and is now lost in a very busy city. When the two unexpectedly meet, a friendship begins, filled with adventures, and of course, plenty of banana pancakes.

Told over four chapters, this sweetly old-fashioned story from newcomer Faber follows the friendship that develops between a competent, kindhearted girl named Mango and Bambang, a talking tapir from Malaysia, whom Mango takes in after finding the animal cowering in the middle of a crosswalk, snarling traffic. Overcoming his initial nervousness (after a month, "Bambang still hid, sometimes several times a day, from possible tigers"), Bambang has a mixed experience at the local pool and has a run-in with one of Mango's neighbors, who collects everything from "pickled puffer fish" to the "mustaches of famous murderers" (and the occasional tapir). Vulliamy's chic black-and-white illustrations, accented with lavender, play right into the primness and dry humor of Faber's storytelling, helping to create a bustling, adventure-filled urban landscape that readers should be eager to revisit. Ages 6-9. (June) © Copyright PWxyz, LLC. All rights reserved.

Gr 2-4-Mango Allsorts is a lonely girl who is good at many things: making her father buttered noodles, practicing karate, playing chess, and wiggling her ears while sucking on a lollipop. On her way home from karate class, Mango comes upon a lost and scared Malayan tapir named Bambang, who is stranded in the middle of the road and blocking traffic. After much coaxing, Mango convinces him to come home with her and have banana pancakes. The two friends have adventures finding a swimming hole, rescuing Bambang when he gets himself netted by the grumpy downstairs neighbor, and creating beautiful music together for the Big City Concert. This whimsical book is a heartfelt story of friendship with interspersed facts on tapirs. Charming black-and-white illustrations throughout support the text and add to the humor. VERDICT A quirky new early chapter book series featuring two memorable characters.-Lisa Nabel, Dayton Metro Library, OH © Copyright 2016. Library Journals LLC, a wholly owned subsidiary of Media Source, Inc. No redistribution permitted.

Mango's father is very busy, so she has become self-sufficient. So much so that when a lumpy black-and-white creature cowers in the middle of a crosswalk, she takes it upon herself not only to resolve the ensuing traffic jam but also make sure that the creature a Malayan tapir feels right at home. Bambang, the tapir, is easily lured in by the promise of banana pancakes at Mango's penthouse apartment, but he sticks around since Mango is such a good friend. Elsewhere, Mango and her tapir pal head to the park to go swimming, discover Bambang's deep love for hats of all kinds, and fight off a mean-spirited neighbor hell-bent on collecting exotic artifacts . . . like a certain Malayan creature living at Mango's place. Each of Mango and Bambang's gentle adventures is discrete enough that emerging readers can break up the book into more digestible pieces, while Vulliamy's cartoonish two-color illustrations check out that adorable tapir in a tasseled sombrero add to the whimsical atmosphere. Middle-grade readers tired of the usual animal shtick will be charmed by Bambang.--Hunter, Sarah Copyright 2016 Booklist

A lonely girl befriends the terrified tapir she finds stranded in a big, busy city. Mango Allsorts can leap from the high diving board, do karate kicks, and apply the Sicilian defense in chess (mastering the clarinet remains a work in progress). The pale-skinned, black-haired girl cooks buttered noodles for her father when he's had an especially trying day. Returning home from her karate lesson one day, she finds traffic at a standstill because a curled-up tapir is lying in the crosswalk. Mango scolds the clueless onlookers, then invites him home with her for banana pancakes. His name is Bambang, and fleeing a tiger has led him far from home. Friendship blossoms: they jump from a high dive; she loses and finds him more than once; they encounter an unscrupulous Collector of the Unusual. The droll and lively opening raises expectations that remain largely unfulfilled. Lessons are learned as Mango and Bambang trade parent and child roles. The story shifts between their points of view, with occasional interruptions from the intrusive narrator, who asks readers irrelevant, uninteresting questions ("What is your nearest public pool like?"), deflating the effervescent fantasy with ho-hum realism and plodding didacticism. Yet readers will learn more about tapirs from the ample, expressive illustrations than the text. Portraying the pair as a charming duo, the art lightens the tone and provides consistency lacking elsewhere. This debut's imaginative premise leads to intermittent flashes of wit and quirky humor, but promising material is left unexplored. (Fantasy. 6-9) Copyright Kirkus Reviews, used with permission.
More book reviews at iDreamBooks.com