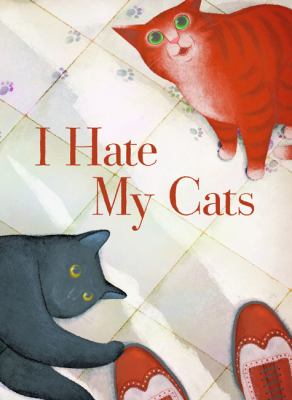 Summary: Ginger and Fred, a pair of cats, can be picky, messy, and troublesome, and although they frustrate the author, in the end their presence is comforting and essential.
Tags from this library: No tags from this library for this title. Log in to add tags.

Ginger is the weird one. She plays with peas, purrs at artichokes, and has a strange fondness for chicken (but only the neighbor's chicken). Then there's Fred. His greatest talent? Sleeping. Oh, and hiding. And when he's not hiding, he's conspiring with Ginger to destroy the house! Such is life with cats. . . can't live with 'em, can't live without 'em--if you love them, that is. And yet the question remains: Why are these captivating creatures so marvelously maddening?! From internationally bestselling author Davide Cali, this humorous picture book about a cat owner and his beguiling felines celebrates quirky cat companions, impurrfections and all.

Ginger and Fred, a pair of cats, can be picky, messy, and troublesome, and although they frustrate the author, in the end their presence is comforting and essential.

K-Gr 2-An ode to the charming quirks that define our feline friends. A slightly weary but bemused human narrator introduces readers to his two cats: Ginger, "the weird one," and Fred, "the lazy one." Orange tabby Ginger exhibits some oddball behaviors: purring at vegetables, chatting with pigeons, and occasionally missing the litter box. Black cat Fred enjoys sleeping on sweaters ("preferably white ones"), napping on the newspaper his human's trying to read, and casually knocking over vases. When the two cats inevitably invade their human's workspace, depicted as an artist's table strewn with paint, brushes, and pens, he yells "Stop it!" and the cats scatter. Feeling sheepish, the man leaves treats in their bowls as a mea culpa. By bedtime, the two furry scamps have forgiven him and make themselves quite comfortable-Fred nearly sitting on the man's head. "Oh, how I hate them!" the man exclaims in the find spread. The softly rounded shapes contrasted with elegant lines set against classic pre-war style décor give the visuals a sophisticated feel. Cali was clearly inspired by real-life pets, while Pirolli expertly captures both the haughty and goofy moods of Fred and Ginger. -VERDICT A wry read-aloud that would work well in storytime, especially thematic programs on cats or pets we love (or love to hate), and a must-have for anyone who treasures those oh-so-complicated love-hate relationships.-Kiera Parrott, School Library Journal © Copyright 2018. Library Journals LLC, a wholly owned subsidiary of Media Source, Inc. No redistribution permitted.

The ultimate ode to cat-lovers, this succinctly captures the endearing relationship between an artist and his two idiosyncratic house cats. Ginger, the weird one, plays with peas, purrs at artichokes, and speaks to pigeons. Fred, on the other hand, is the lazy one, and he is friends with the vase, and the side table, but NOT the vacuum cleaner. Like the inquisitive cats themselves, Cali delights in the most mundane and often annoying of feline habits knocking things over, chasing everything that moves, shedding on the good towels though he helpfully frames these quirks as necessary acts of play and exploration. Illustrator Pirolli juxtaposes the lively, animated cats against serene, calm, and almost palatial interiors and spares no detail; her attention to light and shadow rings especially true to the cats' keen and curious eyes. Even the most feline averse will recognize this humorous book as a perfect encapsulation of the madness of cats, and those that love (or hate) them.--Ada Wolin Copyright 2018 Booklist

The adult narrator lists cats Ginger's and Fred's odd and/or frustrating behaviors (all utterly familiar to cat lovers), culminating in their coordinated attack on the man's drafting desk. The man loses his cool, apologizes, and is forgiven; then the cycle begins again. Much of the slight but endearing and funny story's humor comes from characters' expressive body language in the realistic illustrations--and from a single glimpse of the narrator's fed-up face on the final spread. (c) Copyright 2019. The Horn Book, Inc., a wholly owned subsidiary of Media Source, Inc. No redistribution permitted.

Fred and Ginger are typical kittiesbut their human isn't always a fan.Ginger (an orange tiger-stripe, of course) is a bit odd. "She plays with peas, / purrs at artichokes, / and speaks to pigeons." Black puss Fred is a bit lazy; he sleeps on "sweaters (preferably white ones)" and "towels (obviously white ones)" and in the sink (white). Fred also likes to sleep under the covers of the bed (which he also fully occupies) and on top of the newspaper (when it's being read). "He is friends with the vase, and the side table" (rubbing up against them) but certainly "NOT the vacuum" (when it is turned on, he runs). Fred "thinks he's good at hiding" (behind sheer drapes), and sometimes the two gang up on their human (who is an artist). He yells when he "can't take it anymore," scaring the catsand then apologizes with treats. The cats forgive himbut he knows who is in charge. International picture-book author Cali pens a simple story every cat's human will recognize. However, it's Italian debut illustrator Pirolli's perfect portrayals of pussycats that charm from every page. Both cat expressions and the lines of their bodies are flawless. The interplay between textual narrative and illustrations is a primer in visual irony, so deadpan that children may need a few runs through to get it.Just about any human owned by a cat would appreciate this as a gift. (Picture book. 4-10) Copyright Kirkus Reviews, used with permission.
More book reviews at iDreamBooks.com