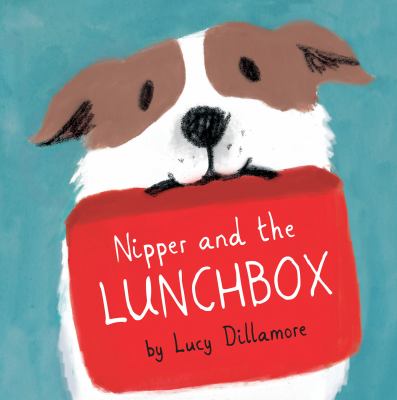 Nipper and the lunchbox / by Lucy Dillamore.

Genre/Form: Picture books.DDC classification: [E] Summary: "Nipper hates being left alone all day while his best friend Richard is at work. But when he realizes one morning that Richard has left his lunchbox behind, Nipper sets off on a difficult journey to deliver it."-- Publisher's description.
Tags from this library: No tags from this library for this title. Log in to add tags.

Nipper hates being left alone all day while his best friend Richard is at work. But when he realizes one morning that Richard has left his lunchbox behind, Nipper sets off on a difficult journey to deliver it. Will Nipper find Richard in time? Will he survive the many dangers along the way? And what will happen when he gets there? A touching story from a new talent about the power of determination and the strength of true friendship.

"Nipper hates being left alone all day while his best friend Richard is at work. But when he realizes one morning that Richard has left his lunchbox behind, Nipper sets off on a difficult journey to deliver it."-- Publisher's description.

PreS-Gr 1-Nipper is a small, friendly dog who loves spending time with his human companion but hates the moment each day when Richard leaves for work. When he notices that his beloved friend has left behind a lunch box, Nipper knows exactly what he is going to do: he squeezes and wiggles through tight mail slots, followed by perilous encounters with "dangerous" animals and vehicles, before reaching his pal with lunch box safely intact. Soft pastel illustrations accompany an endearing story about the strong connection between human and pet, and the limitless bonds of true friendship. Dillamore's gentle images are subtle and spare, yet pack a great deal of intricate detail sure to elicit more than a few infectious giggles. While Peggy Rathmann's Officer Buckle and Gloria offers a far more flamboyant story with more vivid full-page color spreads, Nipper emerges as no less worthy a hero than Gloria. VERDICT There are a plethora of books about the faithful companionship of dogs, but this one is a worthy addition to any school and library collection.-Etta Anton, Yeshiva of Central Queens, NY © Copyright 2018. Library Journals LLC, a wholly owned subsidiary of Media Source, Inc. No redistribution permitted.

In this British import, a small, brown-and-white dog named Nipper zips through town to take a forgotten lunchbox to his devoted owner at the man's shop.An inviting portrait of Nipper on the cover shows the cheerful canine holding the handle of the red lunchbox in his mouth, with the book title scrawled on the lunchbox's side. Nipper is devoted to his owner, Richard, who heads off to work each morning, leaving Nipper alone. When Richard leaves his lunchbox at home one day, Nipper grabs its handle and sets off on a journey through the countryside and into town, where Richard's toy shop is located. The dog falls asleep in the store window, creating a draw for customers, and in a satisfying conclusion, Richard decides Nipper can be his partner at the store. Busy, soft-focus illustrations in a muted palette are filled with a diverse cast of characters, including people with disabilities, same-sex couples, and women in hijab. (Richard presents white.) A double-page-spread scene of the town square with Nipper lost and alone at its center is particularly interesting, with a crowd of people of every sort, from dark-skinned twins in a stroller to an elderly white lady with a walker (and, in a crowd-pleasing but rather baffling detail, several pairs of underwear).Nipper might be just a little nipper, but he is smart and courageous, solving a problem in a resourceful way. (Picture book. 4-8) Copyright Kirkus Reviews, used with permission.
More book reviews at iDreamBooks.com